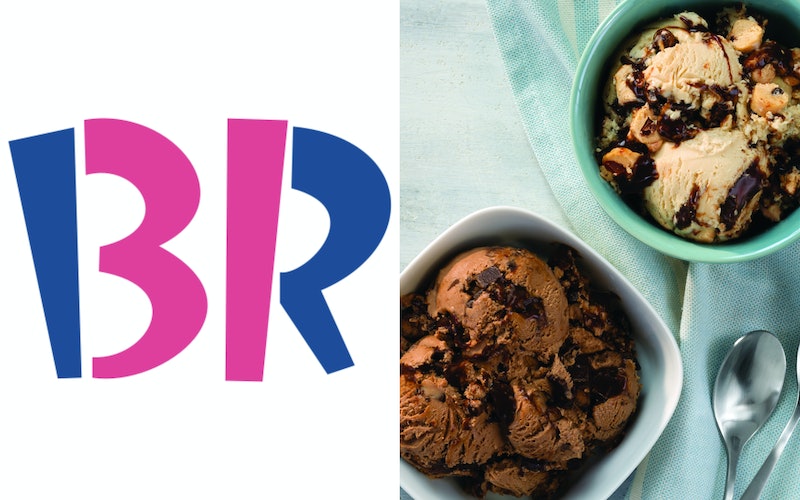 Big news for folks who tend to avoid dairy, but still love a refreshing, frozen treat when the weather is at its hottest: Baskin-Robbins is launching two non-dairy ice cream flavors in August. Non-Dairy Chocolate Chip Cookie Dough and Non-Dairy Chocolate Explosion, as they’re called, have all of the punch of Baskin-Robbins’ classic ice cream — but since they’re plant-based and vegan, there’s none of the dairy. And even better, participating locations of the ice cream chain will be hosting sampling events on Aug. 4 so you can try out both flavors before you buy. Heck, and yes.

Said Baskin-Robbins Director of Research and Development Jeanne Bolger in a press release, “The Baskin-Robbins culinary team has been hard at work on our non-dairy flavors for over two years. It was important for us to take the time to get it right. She described both flavors as “smooth and indulgent,” with “the incredible quality that our customers have come to expect from any Baskin-Robbins ice cream.” Added Bolger, “We’re very proud of the result.” Both flavors are scheduled to hit Baskin-Robbins shops on Aug. 1.

The two flavors both have a base made from coconut oil and almond butter, ensuring there are lots of lipids to give it the melt-y mouthfeel that’s characteristic of full-dairy ice cream. (If you’ve ever had low- or non-fat ice cream or other frozen desserts and wondered why it just didn’t taste the same, that’s why; the fat in milk is what gives ice cream its unique richness.) But although they share a base, the two flavors are also unique: Non-Dairy Chocolate Chip Cookie Dough brings together cookie dough pieces, chocolate chunks, and a chocolate ribbon in a cookie-flavored dessert, while Non-Dairy Chocolate Extreme combines chocolate chunks and a chocolate ribbon in a decadent, chocolate-flavored dessert. Both are vegan and kosher; additionally, Non-Dairy Chocolate Extreme is gluten-conscious.

Also, “Chocolate Extreme” is one of the greatest dessert names I’ve ever heard. It sounds like it takes no prisoners, and I love it.

I’ll be honest: I’m actually kind of surprised it took Baskin-Robbins this long to get in the non-dairy game. After all, the ice cream chain dates back to 1945; in the nearly 75 years since, you’d have thought that other frozen options might have come along, especially since some of today’s biggest names in non-dairy ice cream — Tofutti and Rice Dream — originated in the 1980s. What’s more, sales for plant-based ice creams rose a whopping 50 percent between 2016 and 2017, according to Nielsen, so clearly, the demand is there.

Then again, Jeanne Bolger did note that it took more than two years to develop these two non-dairy options, so it seems that, even if the flavors are just arriving now, the idea has been on the company’s radar for a while now. As she said, getting it right is important, and that takes time.

FYI, Baskin-Robbins defines a vegan menu item as “a food or beverage with no animal sources: no meat, fish, shellfish, milk, egg or honey products, and no enzymes and rennet from animal sources” — but it’s also worth noting (as the company itself does) that all of Baskin-Robbins’ menu items are “prepared in the same area.” That means that the company can’t guarantee that cross-contact won’t happen, so bear that in mind if it’s something that matters to you. Additionally, “gluten-conscious” means that item is made without ingredients containing gluten — but again, the environment in which they’re made isn’t gluten-free, so cross-contact is a concern here, too. As such, Baskin-Robbins notes that people with celiac disease or other gluten sensitivities or allergies should probably steer clear of these options.

Barring those caveats, though, the new flavors sound spectacular — and hey, guess what? You can try them out for free a few days after they’re released! On Aug. 4, participating Baskin-Robbins locations nationwide will be holding sampling events from 3 p.m. to 7 p.m., at which you’ll be able to grab one-ounce scoops of the flavors for free. If you can’t wait that long, though, both Non-Dairy Chocolate Chip Cookie Dough and Non-Dairy Chocolate Explosion will be available for purchase starting on Aug. 1.

Find your nearest Baskin-Robbins location here. (And don’t forget to call ahead to make sure they’re having the sampling event, if you’re interested in it.) Happy munching!