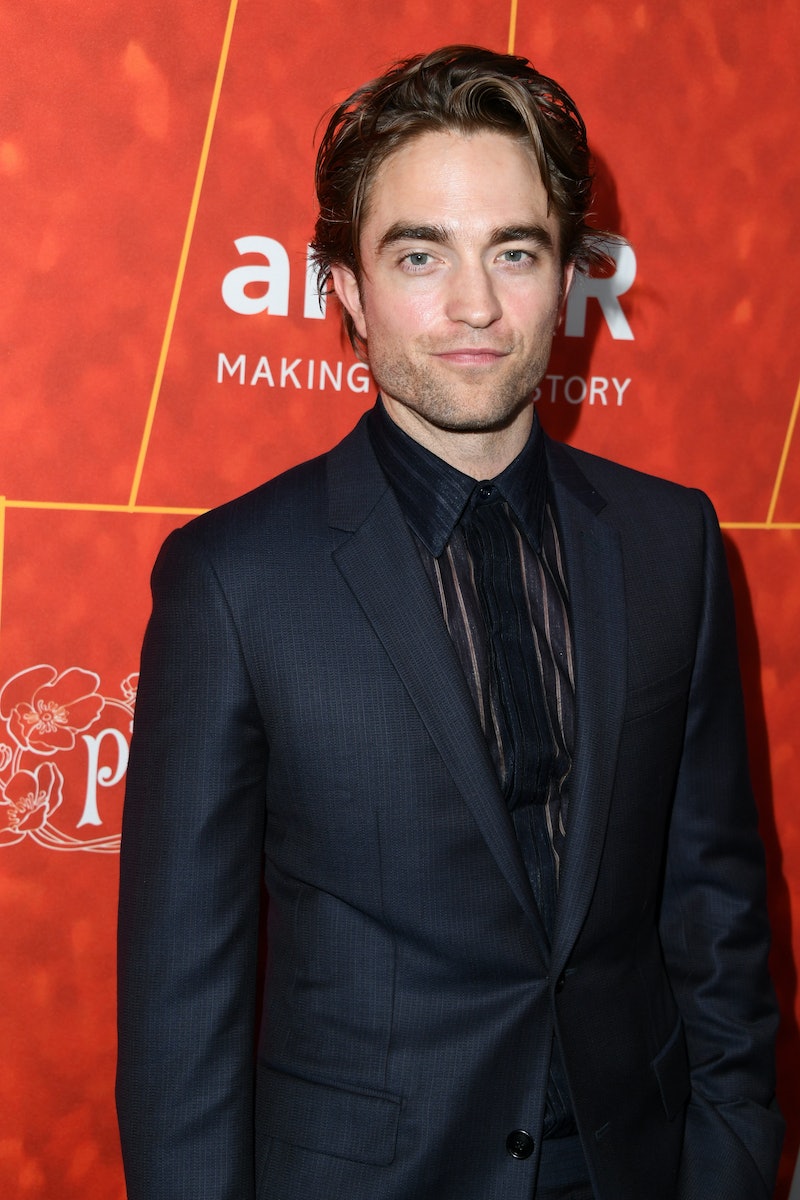 There's been so much buzz over whether Robert Pattinson will be the next Batman or not, with conflicting reports not really giving fans an answer either way. But Batman director Matt Reeves practically confirmed Robert Pattinson as the next Bruce Wayne with a simple tweet early Monday morning, giving many rooting for Pattinson much hope.

On June 3, Reeves took to his personal Twitter account and sent out a simple post with a Robert Pattinson GIF and three bat emojis. This isn't stoking the reported flames, folks. It's basically throwing a whole bottle of gasoline on the fire. Because if this is just a trolling tweet, nothing is sacred. It's the most substantial piece of evidence for Pattinson getting the iconic role, since Reeves is directing the newest The Batman. Bustle reached out to representatives for Matt Reeves, Robert Pattinson, and Warner Brothers but did not hear back at time of publication.

The question of who will play the iconic superhero in the next film became the subject of many conflicting reports in recent weeks. Variety first reported Pattinson's name in the mix for the upcoming iteration, writing that he was in negotiations to sign on for the superhero film May 16. However, Deadline wrote that same night that Nicholas Holt was also on the "short list" for the role of Bruce Wayne.

So while fans — and anti-Pattinsons — took to Twitter to meme-out their feelings, it was actually never clear what the truth was, as both outlets are reputable sources for all things Hollywood, and Variety often only publishes reliable sources. Weeks after those reports, on May 31, The Hollywood Reporter also reported that those talks for the role were leaning more in Pattinson's favor at that time. And just a few days later, Reeves tweets those bat emojis and gif. Which also interestingly came after the official DC Batman account tweeted, "Did somebody light the Bat-Signal?" Of course, it looks like it was to celebrate 80 years of Batman, but a casting announcement could be too.

This new Batman is another in a long line of movies about the dark vigilante, and Pattinson would be following the footsteps of Adam West, Michael Keaton, George Clooney, and Christian Bale. Ben Affleck most recently starred as Batman in Batman v. Superman and the underwhelming Justice League, receiving criticism, as this era of DC movies — the DCEU (DC Extended Universe) — often does. Besides Wonder Woman and Aquaman, the DC movies haven't gained much positive consensus, but hope is on the horizon. Joker starring Joaquin Phoenix looks to bring a never-before-seen origin story, and dramatic aspect, to the infamous villain. And the Suicide Squad spinoff Birds of Prey looks like it's aiming to capitalize on the love for Margot Robbie's Harley Quinn while introducing a few more female heroes to the mix.

According to THR, Reeves rewrote the script for this Batman film after Affleck stepped out of the role following Justice League, and is aiming for a younger iteration of the character, different than the past couple versions. He hasn't said much else, but he did tell THR that the film would have a strong villain. "You can't have Batman without a villain," Reeves said. "There will be a rogues gallery." From Poison Ivy to Catwoman, the Joker to The Riddler, there are countless villains this movie could centralize on.

This new Batman most likely won't be in the current universe set up by Batman v. Superman, Wonder Woman, Justice League, etc. As previously reported by Deadline in 2017, Joker is going to be "the first film under a new banner," currently unnamed, that will expand the current canon universe Warner Bros. has, to "create unique storylines with different actors playing the iconic characters." Assuming Pattinson's Batman will be one of these "unique storylines," it sounds like whatever's coming will be unlike any Batman story told before.