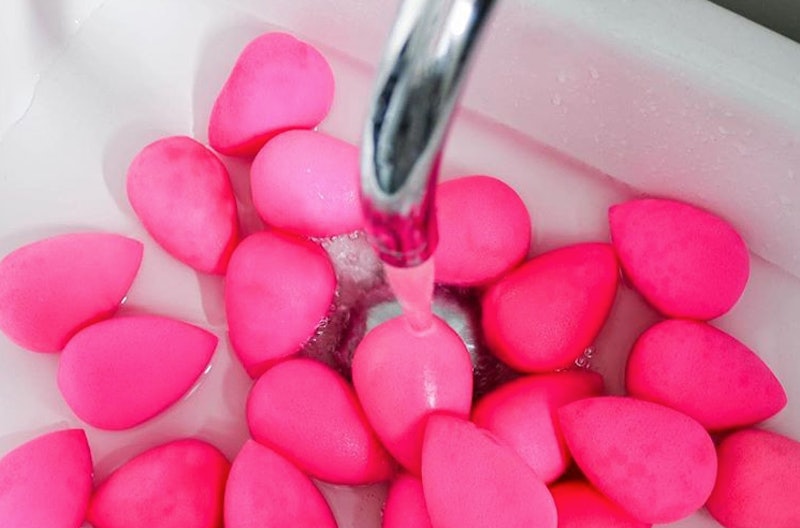 This is NOT a drill. Beautyblender is probably coming to Ulta, and it's going to be really hard to keep your composure after hearing the juicy deets.

One of the most coveted beauty tools ever since it started lining shelves, the original beautyblender has achieved cult status like no other. First available in hot pink, these egg-shaped applicators now come in a variety of hues and sizes to suit all of your makeup needs. These days, it's nearly impossible not to see these sponges featured in a makeup tutorial, as they're the golden tool favored amongst top beauty bloggers and ordinary makeup enthusiasts. Even those who aren't well versed in makeup know the ever-popular beautyblender just may be the key to a flawless beat— that's just how famous these adorable sponges have become.

Although their $20 price tag has been known to turn a few beauty lovers away, the only major downside to the exclusive sponges was that they weren't available everywhere. It looks like 2018 is the year that is all changing, though, because the squishy makeup perfecters just may launch soon in your friendly, neighborhood mecca for all things beauty.

Applicators that were once only sold via Sephora and the brand's own website, beautyblenders have been spotted outside of their usual stomping grounds. Now that MAC officially sells beautyblenders, the sponges are more readily available to consumers who may not be Sephora loyalists.

It looks like MAC isn't the only one getting in on the action, either. A tease from Beautyblender was a huge hint that maybe, just maybe, prayers to the makeup gods have been answered and the sponges will soon make their way into orange shopping bags.

Posting on Instagram with a photo that says it all, Beautyblender shared a flick of their classic pink sponges spewing out of a fluorescent bag. And if you're a makeup lover, then you know that probably isn't just any old plastic bag. It looks like Ulta Beauty's signature orange pop baggie, obvious not only because of its hue, but also by the top of the "T" visible in the shot.

"Major news, coming soon," the caption read, followed by the pair of staring eyes emoji. No other official deets have been given, so for now, no one can say for sure that beautyblenders can soon call Ulta shelves home. But the confetti spewing from what appears to be an Ulta bag is a clue that a celebration is in order.

Just in case Beautyblender's post alone isn't confirmation enough that the brand is partnering with the hair, skin, and makeup retailer, Ulta's Instagram feed backs up the theory. Reposting the same image and caption, the massive retailer for drugstore and prestige beauty essentials hinted their certainly in cahoots with Beautyblender.

Although Ulta already carries a wide variety of other cosmetic sponges, this potential partnership with Beautyblender is perhaps one of the best moves the retailer could make. Fans are so here for the news, because it's really about damn time if all of the hooplah is true.

Just the thought of being able to use coupons, rewards points, and other discounts on the pricey sponges is worth celebrating.

If the retailer gets ahold of Beautyblender's merch, the excruciating dilemma of choosing between Ulta and Sephora just may come to an end for many makeup lovers.

It's clearly what the people have always wanted.

Perhaps, Beautyblender's introduction to MAC, and MAC now being sold inside of Ulta helped sparked the potential partnership.

No matter how the plan might have come about, fans are hyped by the thought of a collaboration happening. As Ulta continues to introduce more brands to its beauty family, this just may be thing to make it the top retailer for all things beauty.

So, bye-bye money. If beautyblenders really do come to Ulta, there's no way your wallet will make it out of the beauty mecca alive.

For more details on Ulta and Beautyblender possibly joining forces, you'll have to stay tuned. Neither brand has officially confirmed the rumors, but things are looking pretty solid for beautyblender-loving Ulta shoppers.