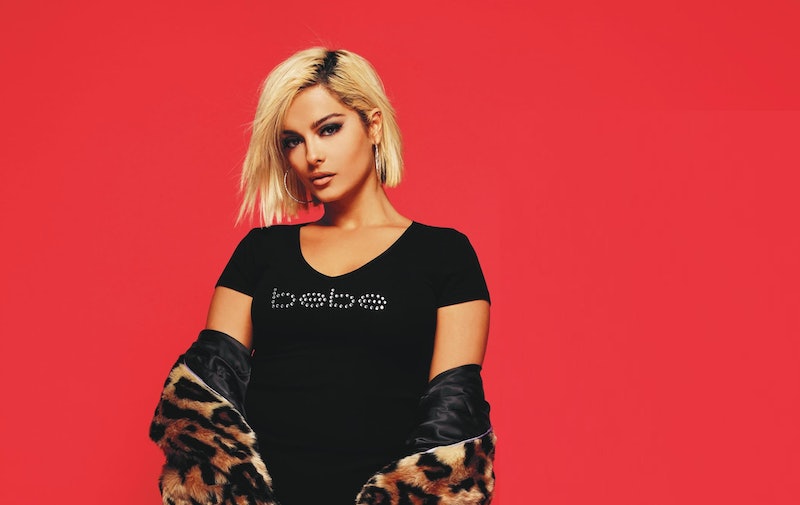 In case you didn't know, fashion brand Bebe was one of those "cool kid" brands in the early 2000s. Wearing a crystal-embossed "Bebe" logo on a white baby T-shirt was a teenage status symbol — and now you can relive those nostalgic memories. The new "Bebe Loves Bebe" fall 2019 campaign (offered in sizes XXS to XL) stars two-time Grammy nominated artist Bebe Rexha, and it brings back some of your most iconic junior high styles.

“When I was younger in school it was the coolest thing to have the Bebe shirt in black or white with the Swarovski crystals that said ‘Bebe’ across your chest,” Rexha told People. “But for me, it was getting those T-shirts or tank tops with the crystals on them with a pair of jeans. That was what everybody was wearing. It was the hottest thing to wear.”

The new fall collection spans across all fashion categories, and will include sportswear, outerwear, swimwear, active footwear, handbags, watches, jewelry, eyewear, and accessories. But that crystal tee still holds a special place for the campaign star.

"I grew up wearing Bebe, and I have memories of growing up and going to the store with my mother and being able to buy one shirt with the crystals on it," Rexha said in a behind-the-scenes campaign video. "I was always so excited because I would always collect the colors, you know, black and white. It was the coolest fashion trend growing up."

The fashion brand's fall campaign is inspired by the idea of loving and accepting oneself, and feeling incredible all the time. That is partly why Rexha was such a good fit for the campaign. According to a press release, the campaign was partially motivated by Rexha's honest comments about the fashion community during her 2019 Grammy Awards appearance.

On Jan. 21, Rexha went on Instagram to address the fact that no fashion designers wanted to dress her for the red carpet because of her size.

“A lot of times artists will go and talk to designers, and they’ll make them custom dresses to walk the red carpet, right? Like, you go to any big designer," Rexha said. "So I had my team hit out a lot of designers, and a lot of them do not want to dress me because I’m too big. Literally, like, I’m too big."

In the video, Rexha urged people to embrace their bodies and feel beautiful at any size, which is why Bebe's campaign hashtag is #LoveYourself.

According to her Instagram video, Rexha wears a size 6 to 8. Bebe's new collection goes up to an XL, which is the equivalent of a size 14. Bebe does not yet have plus size clothing, so while the campaign centers around inclusion, it's important to note the collection is only currently offered to straight sizes. According to a Bebe representative, the brand anticipates adding XXL this season, and additional sizes will be added based on data after the launch.

“It’s not only about me loving the brand, but more importantly, about me loving myself," Rexha said in a press release. "I hope to inspire and empower women all over the world with this message of self-love, I believe it is super important."