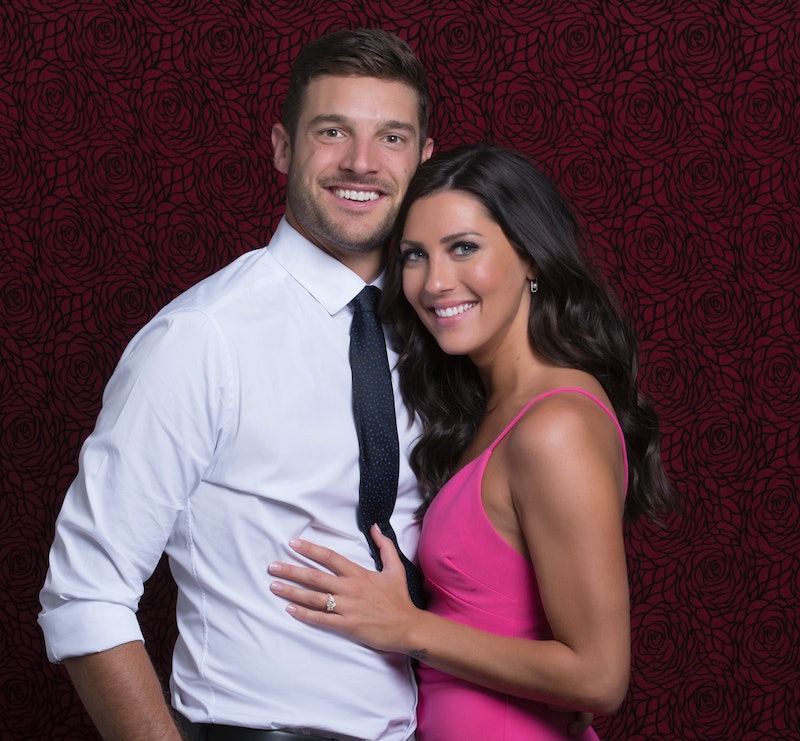 Worry not, Bachelor Nation, there's no trouble in paradise for Becca Kufrin and Garrett Yrigoyen. Although fans were quick to notice that the former Bachelorette was flying solo at Chris Randone and Krystal Nielson's June nuptials, Becca clarified why Garrett wasn't at Chris and Krystal's wedding in a series of Instagram Stories, as Us Weekly reported.

“So many people have been DMing me about why Garrett wasn’t with me at the wedding. Blah, blah, blah,” Becca said in one of videos, per Us, after ABC aired Chris and Krystal's Bachelor in Paradise wedding on Aug. 27. “It’s actually kind of annoying me because we still are individuals and we still sometimes like to do our own thing."

Garrett may not have been among the many Bachelor franchise favorites in attendance, but he had a good reason for missing the Mexico ceremony. As Becca elaborated, her fiancé who proposed on The Bachelorette's Season 14 finale in 2018, “had a surprise birthday party the weekend of the wedding, so he couldn’t come.” According to Us, she also added that she was “fine” with Garrett's absence because she was able to “catch up with people like Tia [Booth] and Kendall [Long] and Chris and Krystal and Bibiana [Julian] and all of the lovely people who I haven’t seen in a while.”

Her explanation didn't quite satisfy all of her followers, however. Late on Aug. 28, Becca posted a screenshot of a DM she received from someone named Sharon. “He don’t really like you or he would be with you,” the woman wrote. “I’m married 36 years and we do it as a team. You need to find a man that stays by your side with special events. You look lonely. Good luck.”

After correcting the user's grammar — changing "don't" to "doesn't" — Becca replied: “Don’t be such a Sharon, Sharon.”

The B The Label founder had also assured fans in her IG videos that "it's OK to do your own thing in a relationship sometimes" and that Garrett was also "on dad dog duty."

Indeed, back on Aug. 1, Becca introduced her followers to her and Garrett's new rescue dog, a corgi named Minno. (She explained in an IG caption that their new addition's name is a "pawfect little combo" of Minnesota (her home state) and Reno, where Garrett previously lived.) “She’s going to be our best adventure yet,” Becca wrote of welcoming the pup into their San Diego home.

Despite that adorable relationship milestone, Becca and Garrett's wedding is still likely a ways off. “No wedding plans, no dates. We’re kind of just playing it by ear and taking it day by day,” Kufrin explained to People in May. “We literally just figured out where we want to live and moved in together.”

At the time, she also shared that cohabitating in California had been going well thus far — even if it was a new experience for her. As Becca explained to the magazine: “It’s been a change! Because I’ve never lived anywhere other than Minnesota and I’ve never lived with a partner before. I was very independent and used to living on my own, so it’s been different to adapt to someone else’s lifestyle. He’s so adventurous and really pushing me outside of my comfort zone to try new things, so it’s been fun.”

Bachelor Nation can now rest easy knowing that Becca and Garrett's journey to the altar is still very much moving forward.