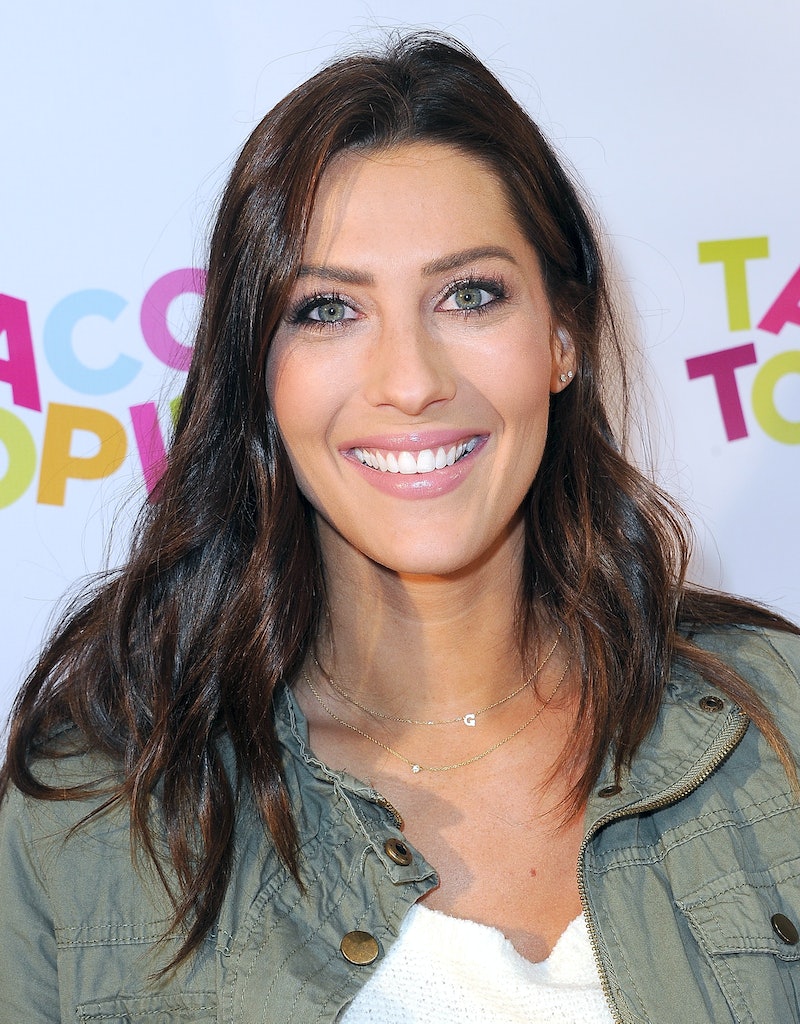 Get ready for what might be the most dramatic tour yet. Bachelorette alum Becca Kufrin is joining The Bachelor Live tour with Ben Higgins, which was announced in a press release. The 66-city tour begins on Feb. 13 in Mesa, Arizona. In a press release, Becca said, "Because of Bachelor Nation, I have shared myself and relationships, and all of the ups and downs, tears and smiles, heartbreak and happiness that came with it, and now it’s time for others to share theirs as we kick off this ‘journey’ together!" In that same press release, Ben's statement called sharing the stage with Becca an "honor."

The tour fits in one whole season of The Bachelor into one night. During the traveling show, Ben and Becca will introduce a hometown bachelor to local women from the audience. Similar to the popular TV series, he will get to know them through dates, games, and rose ceremonies. At the end of the show, that night's Bachelor will hand out the final rose to the woman he had the strongest connection with.

There's a unique feature to this format: the audience will actually have a say in how the "journey" goes. They will be able to ask questions, make suggestions, and cheer on their favorite contestants live in person. The tour was originally announced with Ben as the sole host during the Men Tell All episode of Hannah Brown's Bachelorette season on July 22.

In a Nov. 6 interview with Extra, Ben and Becca dished on their upcoming tour. Ben said this tour is a "thank you letter to Bachelor Nation" since the fans will be able to make love connections thanks to the show. It might not just be the fans of the franchise who will make love connections though. On the Bachelor Happy Hour podcast, Rachel asked Becca, "For the people who didn't find love on The Bachelor, is it possible that maybe they're a contestant [on the tour]?" Becca said she believes it is possible.

Becca explained to Rachel, "You have this amazing crew of people who are still looking to find love. You're in your hometown. Everyone's on the dating apps. Everyone's going to the bars to find somebody. This is basically like that, but just on stage in front of a crowd." Becca also hinted that past contestants could appear during tour and that participants in the tour might make it onto the TV show.

This tour has a lot to offer to Bachelor fans, especially now that Becca is on board.

More like this
This 'Bachelor' Contestant Had The Best Reaction To Wearing The Same Dress As Another Woman
By Grace Wehniainen
A Guide To All Of Zach Shallcross' 'Bachelor' Filming Locations
By Brad Witter
Brooklyn From 'The Bachelor' May Have Accidentally Predicted Her Time On The Show On IG
By Grace Wehniainen
All The Clues Zach & Christina Are Together After 'The Bachelor'
By Grace Wehniainen
Get Even More From Bustle — Sign Up For The Newsletter
From hair trends to relationship advice, our daily newsletter has everything you need to sound like a person who’s on TikTok, even if you aren’t.