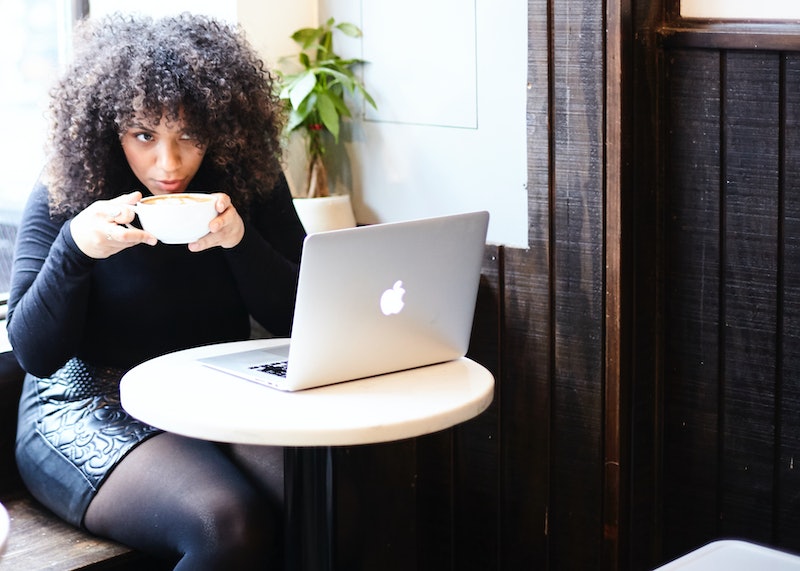 There’s a lot of money in startup funding. A lot of money. For example, in 2018, 8,383 companies raised more than $130 billion in venture capital. Venture capital is the money that helps entrepreneurs bring their innovative — but risky — products to life and then grow exponentially. (Think things like Facebook, or mattresses in a box.) But only 2 percent of venture capital funding goes to women founders and, according to ProjectDiane, a biennial demographic study of Black women founders, startups led by Black women have raised .0006 percent of the $424.7 billion in total tech venture funding raised since 2009. It's clear that there are still immense obstacles for women of color looking for funding.

Or, to put it another way, centuries of structural racism, sexism, and discrimination have created a system where white guys are giving other white guys within their networks billions of dollars — and leaving pretty much everyone else out in the cold.

Who Are Your Friends And Family?

The first round of startup funding is usually the “friends and family” round. And it’s pretty self-explanatory: Startup founders turn to their networks — their friends and family — to raise a couple hundred thousand dollars in order to get their companies off the ground. But not everyone has family and friends with access to that kind of capital.

Andrea Barrica co-founded the accounting software startup inDinero and for the past couple of years has been launching O.School, a resource site for sexuality and dating. Barrica tells Bustle that she just wrapped up her first round of funding for O.School, but as a queer Filipina woman from a working class background, her “friends and family” round didn’t involve any family. Instead, she turned to her professional connections.

“Women of color don’t have those networks. We don’t have trust funds,” Barrica says. “I could never in a million years go to my family for that money!”

And friends and family is just the start when it comes to barriers to access to funding for female founders of color. Venture capitalists lean heavily on their own networks to find companies in which to invest. And, like many Americans', their networks are highly segregated.

Where’d You Go To School?

Who’s In Your Network?

So while white men who attended an elite school — and Harvard or Stanford in particular — can more readily tap their networks for funding, female founders of color who maybe didn’t go elite schools and don’t have family that can invest tens of thousands of dollars into a business venture that’s likely to fail can’t. That’s means that instead of raising money and growing their business, they have to first focus on getting to know the right people. It's a ton of extra labor.

“So many founders have to spend a great deal of time just growing their network so they can get those references,” Sibyl Edwards, co-founder of Black Female Founders, tells Bustle. “It’s so critical to get access to those networks.”

Barrica “did six or seven years of hard tech networking” before raising money for O.School. In addition to the investors who partnered with inDinero, she also won a spot in the tech incubator 500 Startups. “When it comes to fundraising, there’s no shortcut for having that track record,” Barrica says.

But how can someone even start that networking? Barrica’s best advice for other female founders of color is to start one level below the investors — with the founders of the companies in which the fund has already invested.

“Your first goal isn’t to make a bunch of investors fall in love with you,” Barrica says. “Before you go out and talk to 50 angel investors or 50 funds, talk to 50 of the best founders in their portfolios — and make those founders love you.”

Barrica says that before she goes and talks to a fund, she always goes and talks to the people in which the fund has previously invested. Those connections — which are significantly easier to make than connections with investors are — may lead to intros to investors, who might then take an interest in the company. But even if they don’t, there are less formal situations where those founders who already have investment can help bridge the gap for those who don’t.

“Even if they don’t make the intros themselves, guess who the investor is going to meet at a cocktail party? They’re like, ‘Hey, I’m talking to this company called O.School,’ and the founder will be like, ‘Oh, I’ve met her! She’s smart!’” Barrica says. “That alone is a signal. It’s not just networking with investors. It’s networking with people that investors respect — and that’s founders.”

So What Do You Do?

While Barrica focused on getting into the more traditional Silicon Valley networks, some female founders of color are finding alternative routes to funding. Cassandra Lam, founder of The Cosmos — which creates content, community, and experiences for Asian women creators — chose to raise funding via crowdfunding instead of going for VC funds.

“We made the decision to crowdfund for two reasons: 1. The reality that women of color receive less than 0.2% of venture capital funding, and 2. A community-driven funding model best aligns with our business,” Lam tells Bustle. “We want to be held accountable to delivering value to our community — that’s how we’re going to become a long-lasting, sustainable business. Those incentives often feel at odds with the expectations of venture capitalists.”

Arabella Advisors, a philanthropy and impact investing firm, did a deep dive into this issue and came up with an innovative answer to the question of how to close the funding gap: Philanthropists, but not necessarily philanthropy.

“There are deeply embedded, systemic reasons why that capital is not meeting those entrepreneurs and those opportunities,” Shelley Whelpton,, an executive from Arabella Advisors, tells Bustle. “The structures, the people at the table, the folks making decisions tend to be typically white, typically wealthy, typically highly educated, and coming from the same circles.”

Whelpton says that very wealthy people often have one person managing their investments and another managing their charitable giving. And while they’re “very bold with their grant making" and work to “address structural inequities,” their investments tend to be more conservative. Arabella Advisors’ goal is to educate those wealthy families and individuals about the benefits — both social and monetary — to investing in female founders of color.

“We’re losing a lot of innovation, ideas, and wealth creation because investors carry around inherited biases and aren’t themselves a diverse enough group,” Whelpton says. “I mean, white men from Harvard and Stanford aren’t the only people with good ideas in our economy."

More like this
Black Women's Equal Pay Day Highlights An Upsetting Problem
By Brandi Neal
Women Around The World Are Cutting Their Hair In Solidarity With Mahsa Amini
By Darshita Goyal
Where Is Former Bachelor Host Chris Harrison Now & What Is His Net Worth?
By Hugh McIntyre
20 Smart Devices Under $35 That’ll Change The Entire Vibe Of Your Home
By Emma Carey
Get Even More From Bustle — Sign Up For The Newsletter