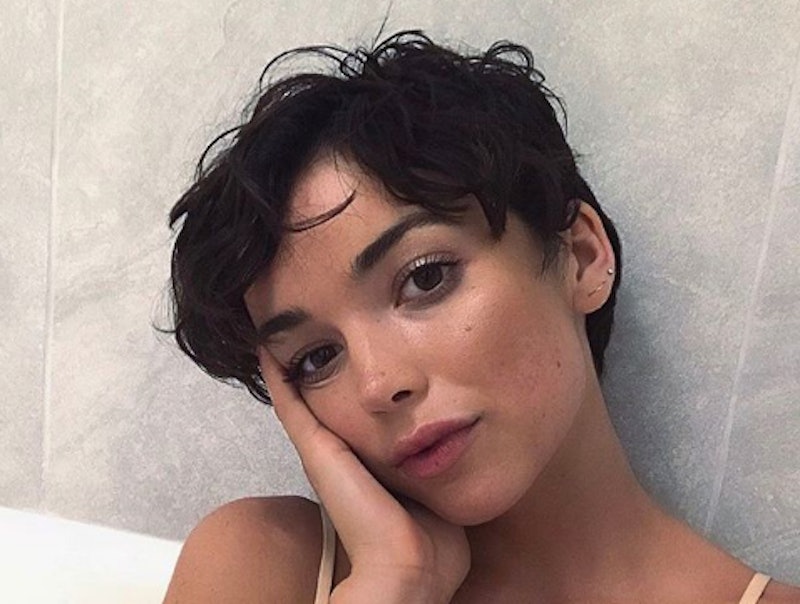 When people first watch The Bachelor, they fall just as in love with the contestant as the designated bachelor does. But with Bekah Martinez's hair, it was love at first sight. Fans are obsessed with her short, brown locks, but it turns out Martinez has quite the hair history. In fact, Bekah Martinez was once blonde. The throwback photo on her Instagram is completely different than her typical 'do, and gives off some major Marilyn Monroe vibes. That's not the only hair style she's tried out in the past, either.

There are some things that you just expect to see on The Bachelor — tons of roses and bold personalities are just a few. Typically, there's also lots of leggy girls with super long hair. But not this time. Martinez is one of the first contestants in the history of The Bachelor to rock a pixie cut. The short, brown hair is absolutely stunning, and fans are obsessed with her not-so-traditional 'do.

But it turns out that it didn't always look like it does today. According to her Instagram account, Martinez used to have shoulder-length blonde hair. The photo on her social media page might be black and white, but it's clear to see that her hair is platinum blonde. The wispy, extreme side part looks airy and natural, but her brown brows are a giveaway that she wasn't born with the shade.

If you're a little shocked to see the pre-Bachelor 'do, you're not the only one.

"HOW WAS THIS ME?" Martinez wrote in the caption of the shot. "Less than a year ago too, ugh. Summer is so my season."

The photo was posted in March 2017, which means this look is probably back from summer of 2016. Fans were quick to point out that she's giving off major Marilyn Monroe vibes in the photo. With the white hair and black-and-white vibes, you can't deny the resemblance.

It's no secret that The Bachelor and Bachelorette have caused controversy in the past for their lack of racial and ethnic diversity. The show is made of predominately white women and men with long hair and slender builds. In fact, it took the show 20 seasons to have a black women as the Bachelorette. Having a Latina woman with a pixie cut on the show breaks tradition in an awesome way.

This isn't the only time that Martinez has talked about a hair transformation on her social media, either. Earlier this month, the contestant posted a photo of grown out arm pit hair on her Instagram. She put up a poll with the options "I heart the patriarchy" and "All natural, baby" as the options.

"You know, the whole shaving/not shaving debate is really kind of irrelevant," she said on her Instagram stories, according to previous Bustle coverage. "It's definitely just the essence of white feminism, because if we want to talk about real problems like the systematic oppression of women of color..."

Even Martinez says that she's not necessarily pushing major boundaries by sporting armpit hair. But it's nice to see Martinez going against the grain and being herself.

According to her Instagram, this isn't the first time that she's sported hairy pits, either. While she says she did get them waxed — "all you haters will be happy to know" — it doesn't look like she'll be giving up her pixie cut any time soon.

Martinez proves that The Bachelor isn't just about finding love. The show is about being your true self and putting yourself out there. Whether your "out there" is national television or just your Instagram page, Martinez is inspiring people to do the same.