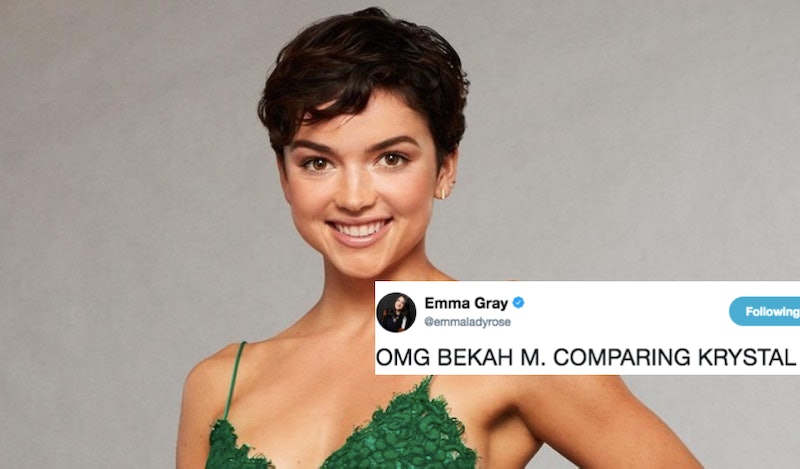 Krystal certainly hasn't made many friends on this season of The Bachelor — she's been whiny and petulant and downright annoying to be around (and to watch). Viewers see what they see on television, but it turns out that Krystal is seemingly just as frustrating in the Bachelor mansion, too! Bekah M. compared Krystal to Donald Trump on The Bachelor, so we know just how she feels about her fellow contestant.

It wasn't that Bekah just said "Krystal is Donald Trump." It wasn't that basic (in a good way). Krystal and Kendall were chosen for the worst part of being on The Bachelor — the two-on-one date. Ick! Of course, everyone on the show thought that Krystal would certainly be on the chopping block on this date. They all hate her, so they all hope that Arie hates her, too. Welp, it's not as easy as that, as America well knows. Remember the 2016 election, when many thought Hillary Clinton was a shoo-in for the presidential election? Yeah, so does Bekah. All of the other women were all, "Krystal's going home," and Bekah was like, "Don't be so sure, ladies!" What she actually said was, "No one thought Trump would win the election either." Well, damn, Bekah.

Girlfriend ain't wrong. Nothing is over until it's actually over, and there was a good chance that Krystal could have been the one walking back to the Bachelor contestants, rose in hand. Luckily, that didn't happen, because I just can't take another heartbreak like I did on election night 2016. The public must be ready to laugh at the election results, because Twitter absolutely loved Bekah's joke.

While the insinuation that the women in the house shouldn't get too excited about Krystal leaving yet, let's unpack this a little bit further. Krystal actually may resemble Donald Trump more than we've thought about. Let's look at this side-by-side.

Krystal was convinced that she and Arie had the best relationship on the show, even though she had spent like 10 minutes with him. Trump is convinced he is the most-liked leader of all time, even though his approval ratings are in the toilet.

Krystal was basically already married to Arie in her own brain, and she was wondering what all of these other women were doing on her date with Arie. Don't they know that they're meant to be together? Similarly, Donald Trump keeps talking about Hillary Clinton and also how he had the best State Of The Union ratings, even though he did not.

Our President loves to send 7 a.m. tweets yelling about everything from Russia and the stock market to NBC and fake news. Krystal once huffed and puffed and locked herself in her hotel room so that Arie would feel badly for her. (She miscalculated that one, because Arie certainly did not fall for it.)

Hm... maybe Krystal does have more in common with the 45th President Of The United States than I would have originally thought. Krystal's biggest problem on the show seems to be that she feels like she has to put on an act to get people to like her. In the meet-the-contestants portion of Episode 1, Krystal seems like a sweet, kind-hearted woman who just wanted to help people and maybe find someone to settle down with. But as soon as the cameras rolled in the Bachelor mansion, she got possessive and territorial on a show where she's dating the same man as 30 other women. That never works out for anyone on The Bachelor. Krystal is probably a nice person in real life, but on The Bachelor, Krystal earned a not-so-nice comparison to the current Commander-In-Chief.