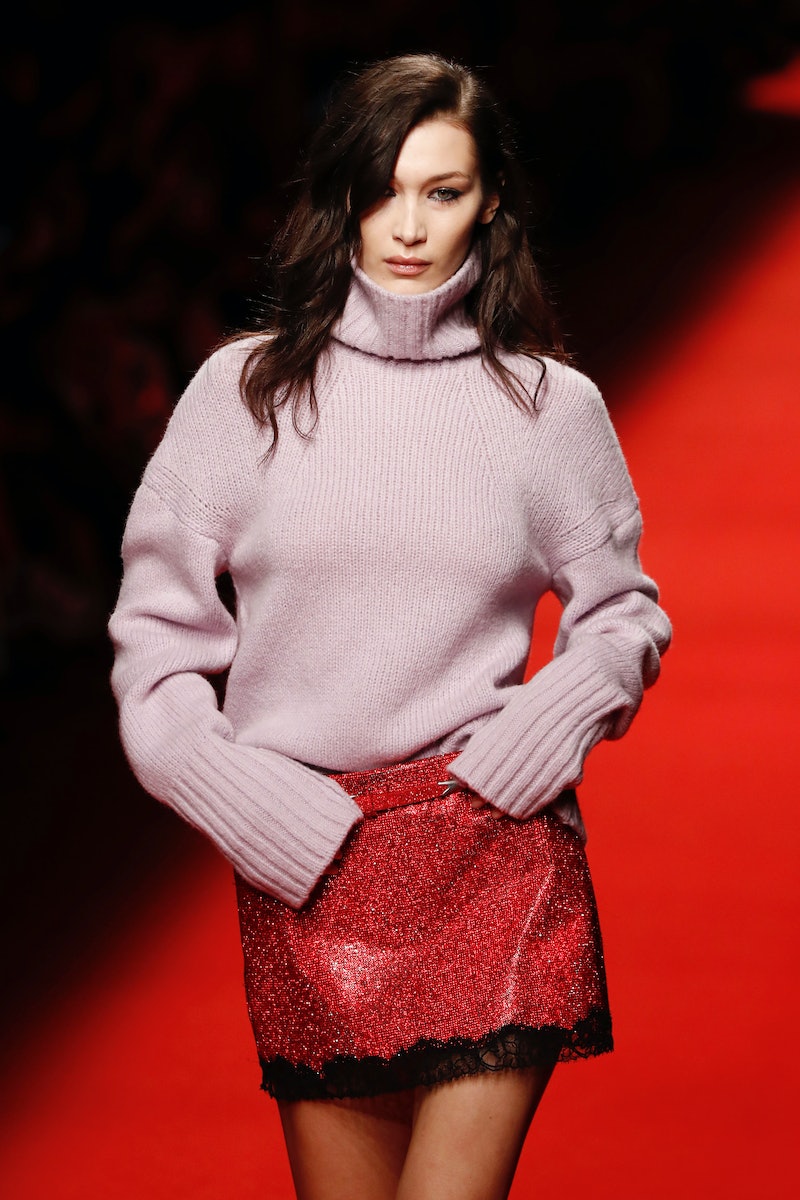 One of the modeling world's most famous brunettes just dyed her hair blonde — and it's giving off major Gisele Bündchen vibes. Bella Hadid has dirty blonde hair now, and the model debuted the new look on her personal Instagram. This blonde 'do is certainly a dramatic change since Hadid is known for her chocolate brown strands, which she usually wears straight, shiny, shoulder length, and center-parted. While the model is adventurous when it comes to styling her locks and switches things up on the regular in real life and for work, she doesn’t change her shade very often. Therefore, when she does go lighter, it's a big deal — even though, according to her Instagram post, this shade is actually closer to her natural hair color.

With this beachy coif color and style, Hadid totally resembles her fellow supermodel Gisele. In the close up image, Hadid rocks a perfectly messy bedhead. She shows off a smattering of freckles across her nose in the makeup-free shot, too. She captioned the image "Back to dirty blonde, back to my roots,” which reminded her followers that she is indeed a natural blonde.

It's not clear if Hadid went blonde for a new campaign photo shoot or simply because she felt like it. She did tag celebrity and fashion photographer Mert Alas in the shot, suggesting that it was he who encouraged her to go back to the hue she was born with.

Alas also posted a selfie with Hadid on his own Instagram while in Turkey, which displayed her newly-lightened follicles bathed in natural light. From this vantage point, Hadid's hair took on an almost strawberry blonde cast.

Whether or not Hadid will keep the lighter locks remain to be seen. The only thing that is certain is how terrific this soft shade looks on her.

Followers were quick to react to Hadid's new hair in the comments section of her post. Several users noted Hadid's resemblance to Gisele, with one succinctly writing, "This is Gisele." Another user thought that Hadid's hair didn't really appear to be all that different, posting, "Your hair is brown but ok." Another follower called it a "red tint." This user summed up Hadid's hair best, posting, "Lovely! You are good at any color!"

Here's a picture of Hadid’s usual rich brown locks. Once you toggle back and forth between images of both shades, you can see just how drastic the change is.

Hadid has gone platinum in the past. She effortlessly rocked white blonde hair that was slicked off her face on the Winter 2016 cover of Paper.

It's not just the color Hadid likes to switch up. Fans will remember that Hadid had bangs as recently as February 2019. Her pitstop at bangs was awesome — if short-lived. The piece-y fringe, which appeared to be an assist from clip-ins, framed her face and highlighted her fabulous bone structure.

Hadid slayed her blonde strands. It was refreshing to see her go back to her dirty blonde basics. Definitely keep your eyes on her Instagram this week to see if the new 'do hue is for good.