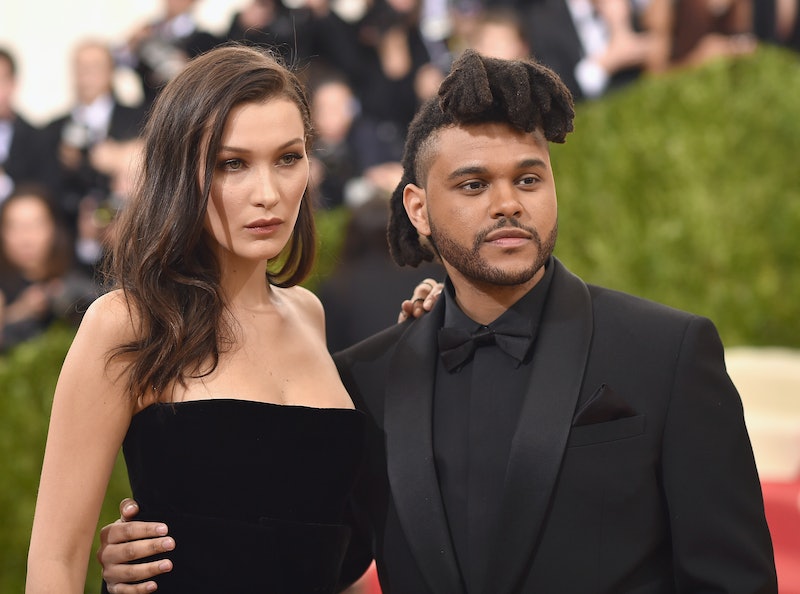 It's been over two years since these two were in a relationship, but Bella Hadid and The Weeknd are on vacation in Japan, and they might just have made their romance Instagram official (again). On Sunday, the singer visited the Robot Bar in Tokyo with a group of friends, and Hadid was along for the ride. In his Instagram story, The Weeknd shared a video of Hadid enjoying a performance. He also later posted a picture with his friends Reza Fahim and La Mar Taylor, crediting Hadid for taking the photo in the caption. This could be a sign that these two are making things Instagram official, and that they're once again getting serious about each other.

The two also appeared in a video The Weeknd posted later that night, where they were seen cuddling at a karaoke bar. The PDA seemed much too intimate for these two not to be dating, but neither star has commented on the rumored relationship publicly. According to E! News, both Hadid and The Weeknd were spotted walking around the Shibuya district in Tokyo earlier that day, accompanied by bodyguards. It seems the stars spent the whole evening together, going from the wild show at the Robot Bar to an equally thrilling time at a karaoke bar. They definitely seem pretty cozy, and it isn't the only time the two have been spotted together in the last few months.

According to E! News, Hadid and the Weeknd were seen kissing at the 2018 Cannes Film Festival in May. The two were photographed smooching at an after party, and were also reportedly spotted leaving together. The model and singer also attended one of the film screenings during the event. A few weeks after the festival, both stars reportedly jetted off to Paris together.

One source described the two's day in Paris to E! News, and it definitely sounds like these two could be dating. "It was a great day for them and they walked all over the Pigalle. They stopped at the A La Cloche D'or and Blueberry Cafe. They sat outside and had a long conversation," the unnamed source told the publication. "He was showing her things on his phone. She was totally at ease, kicking back with a glass of rosé and a cigarette. They left with their arms wrapped around each other laughing and enjoying the evening. He stopped on a street corner to buy her roses, which he carried around the city."

The possible reunion between the two stars is not completely unexpected, and they might have been seeing each other in secret for a while. The Weeknd's latest album, My Dear Melancholy, features lyrics about having regrets about an ex. After the album's release, there was plenty of speculation that some of the songs were about Hadid. In April, they both attended the Coachella Music Festival in Indio, California, where they were also reportedly spotted kissing. This is the first time the couple was seen reunited in public, though rumors that the two had reconciled began as early as November of 2017, according to E!.

Hadid and the Starboy singer dated in 2016, but reportedly split after their jet-setting lifestyles clashed. Neither star could find time to make the relationship work, and The Weeknd began dating Selena Gomez after the breakup. The two singers officially parted ways in October of 2017. In May, a source told E! News that the model and singer were spending time together, but it wasn't serious yet. "Abel and Bella never lost touch and always reconnect when they are in the same places," the unnamed source said. "Bella has always had strong feelings for Abel. He is definitely dating around, but him and Bella are always flirty and spend time together when they see each other. Especially when they are out partying."

The night out in Tokyo could have just been another chapter of a casual fling, but it does seem like these two are spending quite a bit of time together. The fact that The Weeknd documented their evening at the Robot Bar and even credited Hadid with one of the photos could mean the couple is ready to make things Instagram official. Only time will tell if either star will confirm their relationship, but it certainly doesn't seem like they are trying to hide the fact that they still seem to think the world of each other.