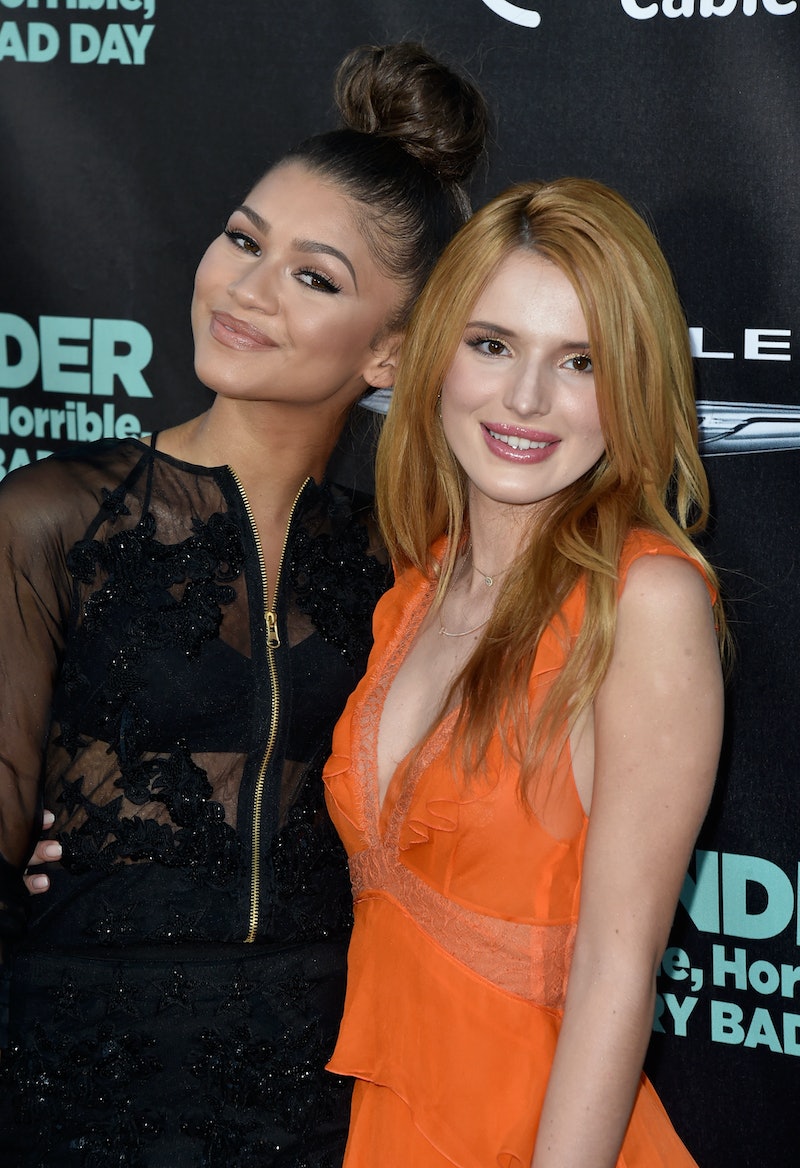 Ever since Bella Thorne and Zendaya played besties on Disney's Shake It Up, the internet has been obsessed with comparing the pair. Thorne has finally had enough of the drama, clapping back at Seventeen Mexico for putting her in a "beauty battle" that is now trending on Twitter.

It's been about five years since the former Disney stars have appeared onscreen together, yet the two can't seem to escape the comparisons. Tweeting a side-by-side picture of the actresses to their followers, Seventeen Mexico asked who looked better in sensual red lipstick, instructing fans to retweet to select Zendaya as the winner and like the post to choose Thorne. Labeled as a "#beautybattle", the post set Twitter fingers in motion, even getting Thorne herself involved.

It's not the first time Thorne has reacted to Twitter pitting the stars against each other. A viral tweet featuring a screenshot from Thorne's Instagram story and a red carpet image of Zendaya, once questioned their careers. Reading, “Kind of amazing how two people can start somewhere together but end up in two drastically different places", the tweet sent a negative message that got the internet riled.

Now, the drama continues in the form of a beauty contest that Thorne and fans of the stars are not feeling at all.

The tweet already has loads of retweets and likes. But it's not the stats that really matter here. It's Thorne's much needed response that really makes the beauty battle worth paying attention to.

Expressing disappointment in the fact that the media continues to compare the two after so many years, Thorne addressed Seventeen Mexico's beauty showdown. Managing to shut down all of the haters while showing love to her friend and former costar, she sent positive vibes toward Zendaya at the end of her tweet.

Many fans stood by Thorne's side, making tweets that empowered the two rather than choosing a "winner". The magazine's tweet became a thread for many Twitter users to express concerns with the industry constantly putting ALL women against each other, not just Thorne and Zendaya.

If Seventeen Mexico thought true fans would ever seriously consider putting the stars in a beauty competition, many were ready to let the publication know women have much more important things to worry about.

Rather than entertain the thought of choosing one star over the other, plenty of responses to the madness expressed Thorne and Zendaya were equally beautiful.

Both actresses pull off statement red lipstick like total babes, so all in favor of retweeting and liking, say I!

For many, Seventeen Mexico's tweet was worth ignoring altogether.

If anything, though, the beauty contest was worth reflecting on the good 'ol days when Thorne and Zendaya played a dynamic dancing duo. There's just no forgetting their BFF shenanigans.

But more than anything, the upsetting tweet created a space for Thorne and her fans to uplift themselves and other women. It's a new year, after all. It's high time the drama ends.

Unfortunately, the former Shake It Up girls weren't the only ones selected for the beauty competition. Lilly Collins and Cara Delevingne's eyebrows were also up for debate during the magazine's ongoing beauty battle series.

But the mashup between Disney royalty hits a little harder, considering this isn't the first time Thorne and Zendaya have been in this position. Honestly, it probably isn't the last time. Fortunately, the two aren't afraid to give their two cents when the internet makes a competition out of their looks and careers.

Plus, they seem to have a strong bond despite the media always stirring the pot — and that's what really matters.