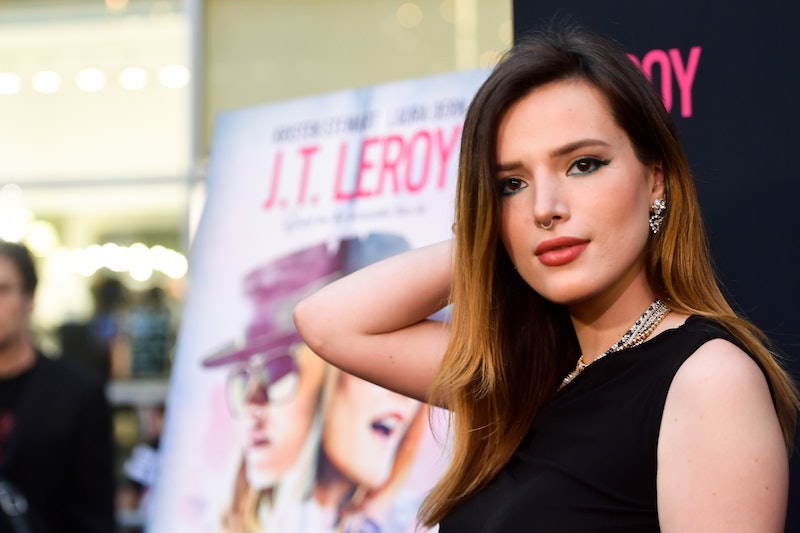 After being blackmailed by someone who hacked her private, nude photos, Bella Thorne is taking a stand against anyone who wants to blame her for the incident instead of the person who stole her pictures. On Tuesday, June 18, the actor shared a series of videos on her Instagram Story where Thorne responded to Whoopi Goldberg's public shaming after the View host blamed the actor for taking nude photos while discussing the attempted blackmail on the talk show.

Thorne revealed that her personal photos had been hacked in a Twitter post on Saturday, telling her followers that "for the last 24 hours I have been threatened with my own nudes ... I feel someone has taken from me something that I only wanted one special person to see," and revealed that the hacker was attempting to blackmail her with the stolen photos. In response, Thorne decided to take "my power back" and shared the topless photos herself on her Twitter account, explaining that by doing so, she was preventing the hacker from continuing to harass her. "I can sleep better tonight knowing that I took my power back," she wrote. "U can't control my life u never will."

Despite her brave decision to undermine her hacker and share the photos herself, Thorne was forced to defend herself yet again a few days later, when Goldberg appeared to blame the actor for the incident on Tuesday's episode of The View. "If you're famous, I don't care how old you are, you don't take nude pictures of yourself," the comedian said. "Once you take that picture it goes into the cloud and it’s available to any hacker who wants it, and if you don’t know that in 2019 that this is an issue, I’m sorry. You don’t get to do that."

"Shame on u," Thorne wrote over a screenshot of a Yahoo article recapping Goldberg's comments about the actor's photo hack. "Watching this interview made me feel really bad about myself. Shame on you, Whoopi ... for putting that public opinion just out there like that for every young girl to think that they're disgusting for even taking a photo like that. Shame on you," the actor said, wiping away tears, in a series of videos on her Instagram Story.

In a text post, Thorne wrote that blaming girls for taking nude photos in the first place is "sick and disgusting," and added that she was "offended" by Goldberg's comments. "Dear Whoopi, I have loved you for so long but honestly I'm so displeased and saddened by your response to my leak," Thorne wrote. "So what a girl can’t send her boyfriend that she misses photos of her that are sexy? Things he’s already seen? I as a women [sic] should be so scared walking around my home, being on my phone, doing anything? Is that what u want our women to be like? Scared of the masses for their sexuality?? Is that what u want? I don’t."

Thorne continued, noting other celebrity nude hacks, like Jennifer Lawrence's hacked photos in 2014. "I’m offended for anyone out there who has ever taken a sexy photo. I am offended for Jennifer Lawrence who feels publicly raped." Thorne then got even more serious, pointing out the scary consequences public shaming and the release of nude photos (sometimes known as revenge porn) can have on people and their mental health. "I am offended for every person who has committed suicide for someone leaking their nudes. Ur view on this matter is honestly awful and I hope u change ur mind set as u are on a show talking to young girls,” Thorne wrote.

In her Instagram Story, Thorne also alleged that she had been scheduled to appear on The View prior to Goldberg's comments, most likely to address the hack and promote her new book, in which she discusses the abuse and sexual violence that she allegedly endured for most of her life. She said that she decided to cancel her interview in response to Goldberg's comments. "I don't feel like being beaten down by a bunch of older women," Thorne explained.

While The View host Sunny Hostin did defend Thorne in the original discussion about the hack, it's not surprising that the actor would no longer feel like appearing on the show to discuss everything she's endured. As is, sadly, often the case with celebrities' personal photos being leaked, the blame is being put on the woman for expressing her sexuality and sharing intimate photos with someone she trusted, rather than with the people who violated that trust or who stole the photos and used them to shame and harass the victim. As Thorne explained on her Instagram Story, telling her that she should have known better than to share intimate photos of herself with her partner is victim blaming. It takes the responsibility off of the person who committed the crime and places it on the person who has been traumatized. It's not right, nor is it particularly helpful.

And let's be clear: Thorne — and every person who has had their nude photos stolen, leaked, or used to blackmail them — has indeed been traumatized, and treating them as the person who has done wrong does nothing but traumatize them all over again. Furthermore, blaming Thorne for taking the photos gives young people everywhere the message that the real crime isn't posting naked photos without consent. And make no mistake, this is a crime.

However Thorne decides to move forward after this incident, she deserves to be supported and applauded for her bravery, not slut-shamed and admonished. The blame should be placed where it belongs — on the extortionist — and not on the woman who has been violated in the most intimate way. And hopefully we can reach a point where people everywhere stop sharing photos that don't belong to them on the Internet.