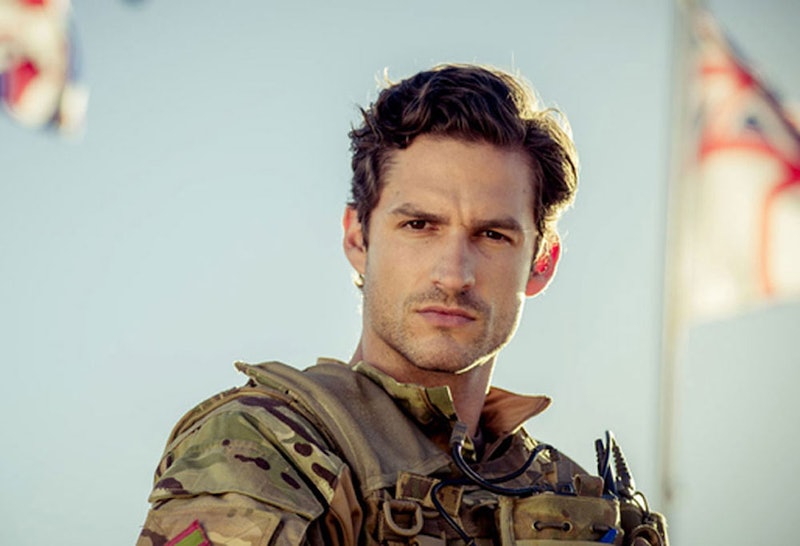 Being a celebrity comes with its obvious perks. But one of the least talked about advantages is the ability to change lives and raise the profiles of various charities. Rather than just lend his name to an organisation, one British actor is getting his hands, feet, face, and, well, entire body dirty for a good cause. I caught up with Ben Aldridge to discuss Our Girl Series 4 and his latest endeavour to change the world.

Although Aldridge has been appearing on TV screens for years, it's his role as Captain James in army drama Our Girl that has allowed him to become a recognisable figure in the eyes of your mum, nan, and everyone down your local pub. Viewers may still be reeling over that cliff-jumping finale but the 32-year-old has more pressing matters to discuss.

You see, Aldridge is set to run one of the UK's toughest assault courses. Not just for his own personal gratification but to raise money for (and awareness of) the charity, Send A Cow. The organisation — which is celebrating its 30th anniversary this year — has grown from a small-scale project run by three British farmers to a far-reaching charity that has so far helped 2 million people living in Africa by providing them with the tools and knowledge to create a self-sufficient source of income.

"My uncle was what they call one of the founding farmers," the actor tells me, explaining that Send A Cow started as a response to Uganda's devastating civil war. "There was a shortage of livestock so they decided to get together and donate a cow." (Now do you see where the name comes from?)

"I always grew up hearing about it and knowing about it," Aldridge continues. "And since I became an actor, we've always spoken about me working with the charity." Thanks to the organisation's milestone, this year proved to be the perfect time for him to take on the role of ambassador — and because the Our Girl star had "a bit of time to devote to it as well."

In September, Aldridge will be taking on Tough Mudder; a 10 mile endurance challenge set up by British Special Forces. He is hoping to raise at least £1,850 for the charity and has set up a fundraising page where anyone can donate.

The money will go towards the entirety of Send A Cow's scope, but the actor expects that the country of Burundi will particularly benefit. Explaining that the charity has helped the average daily income raise from 30 cents to $2.90, he says that there is still much to be done — especially because the country was ranked "the hungriest in the world" in the 2014 Global Hunger Index.

"I'm running Tough Mudder with one of my best mates who's a personal trainer," he says. "We've done something similar before but this is tougher and longer. We're quite excited." Aldridge admits that he's been hitting the gym to build up his endurance and says that his military-based time on Our Girl has helped in a way:

"We do a fair amount of training [on the series]. There's a two week bootcamp before the job starts and then the cast go to the gym as much as they can. It's a pretty fit squad of people."

If you're hoping to see his fellow cast members like Michelle Keegan taking on the muddiest course known to man, you can think again, says Aldridge. "I actually invited all of the cast to run it with me," he laughs. "Not many of them seemed to be free." They may not have been up for actively participating but expect to see a few Our Girl faces supporting Captain James on the sidelines.

Aldridge isn't too worried about completing the course. A mixture of HIIT workouts, CrossFit training, and long runs, plus his recent experience in Uganda is sure to fuel the fire.

In May, the actor travelled to Africa with Send A Cow (and his mum), visiting a few of the projects that the charity has set up. One of the most notable days, according to Aldridge, was one spent with a household led by five children, who were orphaned a few years ago. "They were left with no family and live in the epicentre of the AIDS outbreak," he recalls, adding that the eldest child was 17 and the youngest only three.

Despite initially thinking that he'd find the week-long trip hard to deal with, he said that "it was overwhelmingly positive. By Western standards, we might visit and think, 'Oh my gosh, they live in two huts, they farm the land, and that's their survival.' But compared to the situation [these children] were in which was not being able to put food on the table, the impact that Send A Cow has made is just unbelievable."

Through some farming know-how, families in seven African countries are able to grow their own food and are given livestock so that they can create an "enterprise", as Aldridge puts it. Owning a cow or goat allows rural communities living below the poverty line to sell milk and manure for fertiliser, providing income and food for themselves as well as others.

Aldridge believes that the concept of the charity — which promotes long-term sustainability, rather than quick handouts of food and money — is its greatest asset. "I don't know if my ambassadorship will last for longer than a year," he adds. "But my uncle really wants me to go to Ethiopia next. And I think there might be some future fundraising events in Africa, like big hikes, that I would very happily do."

A love of travel is something that the actor has long had. In fact, it's one of the reasons he accepted the role on Our Girl. ""South Africa (where we've done the majority of the filming) is a politically fascinating country. Cape Town is full of extremes, the very rich and the very poor, the townships and then the very affluent neighbourhoods. Our locations are always moving, so we get to see the countries really well."

I couldn't end the conversation without mentioning the future of the series that has thrust Aldridge into the spotlight. As you can expect, he remained tight-lipped about who will survive the jump that 2 Section were forced to make in the final episode of Series 3.

"We currently don't even know if we're doing another series. But that was a pretty high jump. I'll be intrigued to see who does survive [if another series is commissioned]," he told me, adding that "everyone does love Michelle Keegan."

However, he did open up about the controversy surrounding his character's split from Molly Dawes (played by Lacey Turner) and subsequent romance with Keegan's character Corporal Georgie Lane. When the cast read the script, Aldridge says the break-up storyline "took [them] by surprise as much as it took the audience by surprise."

"There were a lot of tweets criticising Captain James, wondering what the hell was going on, and those viewers probably did have a point. But I guess there are two sides to every story," he adds. "James and Molly's relationship was breaking down. He wasn't responsible for it all; it was very much on the rocks."

He may not be able to give away anything about a new Our Girl series but Aldridge does believe that Captain James and Georgie could have a future together. "I think they definitely share something," says the star. "What they share is essentially losing Elvis and they share a life together. I guess they'd explore that in the next series if there is one." Depending on who survives that jump, obviously.

Whether the pair's story ends here or is allowed to blossom, Aldridge's Our Girl fanbase is set to live on until the end of time.

Send A Cow ambassador Ben Aldridge is taking part in Tough Mudder on September 30 to raise funds for the charity. You can donate here.

This story has been updated to clarify the location in which Our Girl was filmed.