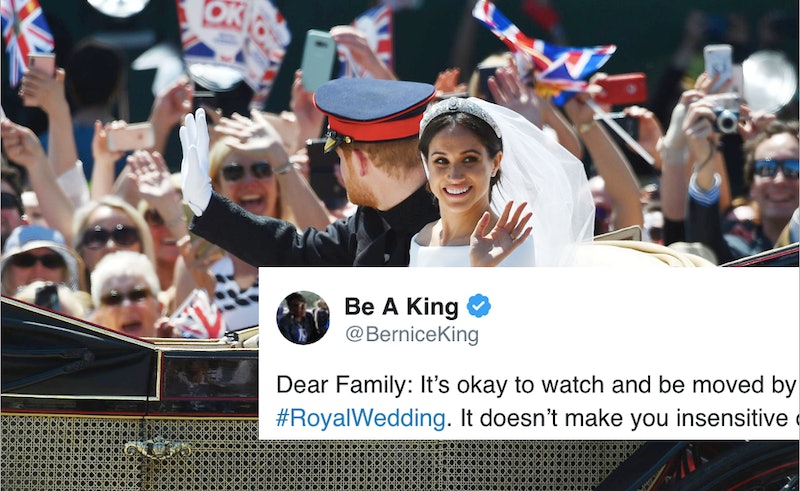 It's official — excitement over the royal wedding and all of its accompanying pageantry has gripped the globe. However, the focus on this happy event has also brought criticism. How can people get all worked up about the wedding of an American actress and a British prince when there are people starving, shooters in schools, homeless refugees? There's a response to that criticism, though, and Bernice King has it. Martin Luther King Jr.'s daughter tweeted about the royal wedding, and her words capture exactly why she believes it's perfectly OK to celebrate the wedding.

"Dear Family: It’s okay to watch and be moved by the #RoyalWedding," King wrote on Twitter. "It doesn’t make you insensitive or less caring about the inhumanity in the world. It doesn’t mean you’ve forgotten history. Find moments of joy. We need them to continue the work."

Her tweet comes in response to criticism from all over the internet.

"Dear #MSM. While trying to peruse news topics that actually matter today, all I can find is articles about the Royal Wedding," wrote one Twitter user on Saturday morning. "In case you forgot, this is America and we are in the middle of an illegitimate government put in place by Russia and Lobbyists. Get your shit together."

King, however, in her series of tweets, made the point that partaking in the worldwide royal wedding celebration in no way precludes caring about those important issues.

She then listed out a series of hashtags ranging from the deadly serious to entirely lighthearted, making the point that people can divide their focus.

"A compassionate, conscious person can care about: #SantaFe #Syria #RoyalWedding #Racism #PoorPeoplesCampaign #Congo #PuertoRico #ChikesiaClemons #Dreamers #NoMuslimBan #Laurel #Yanny #Flint," King wrote, including the royal wedding hashtag in the list. "On the same day, and with attention to how to help eradicate injustice."

The message of her tweets is more than just a platitude. According to Forbes, celebrating achievements is one way of avoiding burnout. While Prince Harry and Meghan Markle's wedding isn't exactly a personal success story for the millions of people who tuned in to watch it, it is a joyful moment, and a turning point for a monarchy that wouldn't have allowed marriages to divorcees or interracial marriages in the past.

Those criticizing the excitement about such a far-removed event aren't doing so frivolously — the frequent points that, for example, Friday's the school shooting in Texas or plane crash in Cuba should take up more airtime are entirely valid. Coverage of the royal wedding shouldn't entirely overshadow the period of mourning that the loved ones of the victims in either of these cases are currently going through. However, King's point is not that it's okay to forget these things, but instead that finding and recognizing "moments of joy" like the royal wedding will make you better equipped to face, react to, and work to fix the sorrowful or anger-inducing events in the news.

It's not every day that you can don a tiara before the sun rises to watch a gorgeously over the top wedding celebration — so listen to Bernice King, and take advantage of the opportunity. It'll leave your spirit refreshed and ready to start working again after the excitement has passed.