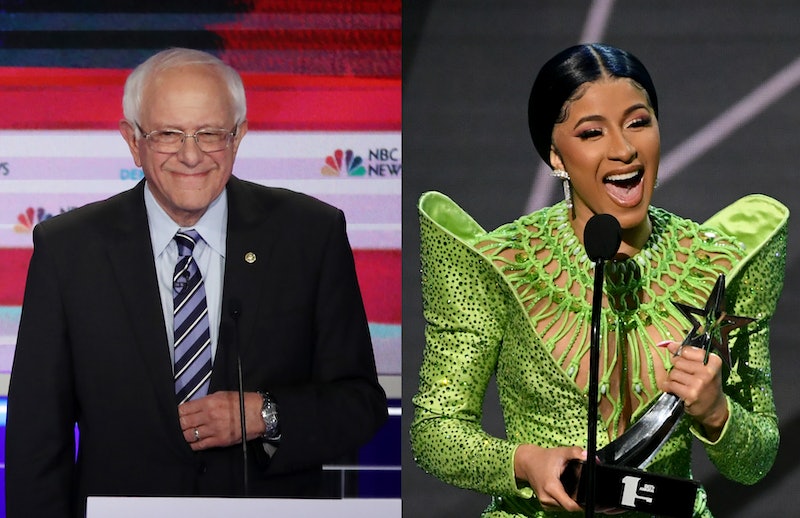 Former government AP student Cardi B has talked politics with a presidential hopeful. This was revealed when Bernie Sanders praised Cardi B on Jimmy Kimmel Live — and the rapper, who has long been a Sanders supporter, had the perfect reaction to the shoutout.

In an all-encompassing interview about Robert Mueller, Medicare, and climate change with late-night host Jimmy Kimmel on July 25, the presidential candidate revealed that he has talked to the “Bodak Yellow” rapper on various occasions. “We have talked on the phone on several occasions,” the Vermont senator told Kimmel. “She’s really smart and she is deeply concerned about what’s happening." The rapper has not been shy about sharing her political believes on Instagram and social media, so it shouldn't surprise fans to hear that she caught the attention of some major politicians.

"That’s the truth," Sanders continued. "She comes from a humble background. She knows what it’s like to live in poverty, to struggle. And she wants to make sure we can improve life for working people in the country, and I’m delighted that she is supportive."

On the heels of Sanders’ interview, Cardi B took to Instagram on July 26 to react to the shoutout. "This makes me so happy!" she wrote next to a clip of the Sanders interview, adding, “I know my High school history teacher is so happy 😩believe it or not guys I was in advance placement in high school for Government and history it was a subject that I learn fast cause I naturally love it!”

She continued, encouraging fans to get involved in politics. “I want us this year to get more familiar with or candidates ‘democratic my preference,’" she wrote. "Take a little bit of our time and open our eyes on what’s going on in this country and how we can change it.”

This isn't the first time the Grammy-winning artist has been vocal about politics. In January, amid America’s longest government shutdown due to border wall funding, Cardi took to social media to slam the administration and advocate for federal workers. “I just wanted to remind you because it’s been a little over three weeks, OK? Trump is now ordering… federal government workers to go back to work without getting paid,” she said in the video.

She continued in the video, making it clear where she stands. “Our country is in a hell hole right now, all for a f*cking wall. And we really need to take this serious. We need to take some action," she said. "I’m scared. This is crazy. I really feel bad for these people that gotta go to f*cking work to not get motherf*cking paid.”

Back in 2016, Cardi supported Sanders in the presidential race and encouraged fans to “Vote for Daddy Bernie, b*tch!” Now, Cardi appears to be supporting the presidential hopeful once again in the election against Donald Trump. “I been reading about Bernie Sanders and I’m really sad how we let him down in 2016,” she tweeted on July 16. “This man been fighting for equal rights,HUMAN rights for such along time. Seeing this country become a better place been really his passion for a long time not a new front for a campaign.”

Cardi B has been Team Sanders for a while, and it looks like Sanders is equally impressed with the rapper. And, who wouldn't be? Cardi is a rapper, actor, mother, mogul, and now political activist — there's nothing she can't do.