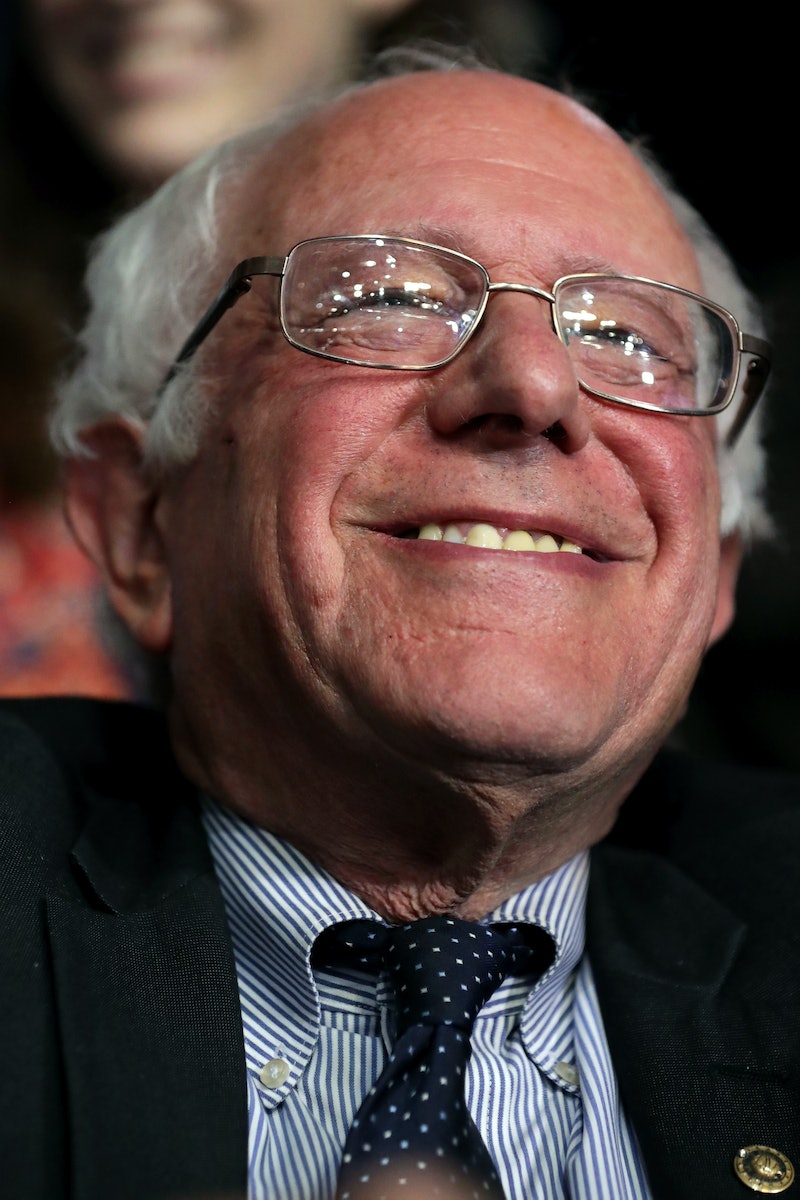 Talk about a humble life-saver. According to a Vice report, Vermont Sen. Bernie Sanders saved a woman in Washington, D.C., from getting hit by a car on Wednesday. And he didn't make a big deal out of it either. The woman, a law student in the capital named Amy Currotto told Vice that she had the near-death experience as she was headed to her guitar lesson that day. According to her, Sanders yelled out, "Please get out of the street!"

In a Wednesday Facebook post that has since gone viral, Currotto wrote, "BERNIE SANDERS, I KID YOU NOT, STOPPED ME FROM GETTING HIT BY A CAR ON MY WAY TO MY GUITAR LESSON." Then she added, "He is also so much taller than me, so awkward picture." Bustle has reached out to Sanders' office for comment.

Here's how it went down, per Currotto, on that eventful day. The law student said that she was on her way to music class when she was crossing the street. She said she was distracted and ended up walking into oncoming traffic. "Bernie Sanders was right behind me," she told Vice, "and was like, 'Ma'am, ma'am, please get out of the street!' Which I embarrassingly did not do immediately, because I was mostly stunned it was Bernie Sanders."

The Vermont senator "seemed concerned," according to Currotto. Eventually, she said, she gained composure, walked over to Sanders, and asked for a selfie.

"Afterwards, I asked him if I could take a selfie, and he obliged," Currotto said. "It all happened probably within 20 seconds, so it was very fast. After we took the picture, he ran off toward the Senate as a crowd of people began to form... It was crazy."

It's not a surprise that the law student was a little stunned to see the senator; he is, after all, a pretty famous political figure among millennials. In comments to Business Insider, Currotto said, "I did not immediately get off the street, even though there was a ton of oncoming traffic, because I was in awe to see him. He tried to continue to bring me onto the sidewalk and was like, 'Ma'am, you've got to get off of the street, you've got to get off of the street!"

According to Currotto, Sanders took the selfie with her and then returned to his office. The senator did not mention the interaction in the press or to pedestrians nearby. And that's probably why people on the internet seem to absolutely adore Currotto's story. If you're well-versed in memes, you'd probably think of the senator as Good Guy Sanders.

For Currotto, it was kind of like a dream-come-true scenario. She told Business Insider that she was a fan of Sanders and that she had wanted to bump into him to pick his brain for a while, especially to know if he would run for president of the United States. "It was crazy cool that I got to meet him because I've always wanted to. But it happened really, really fast. I wish I could've asked more questions," she said. Maybe the law student can see Sanders in the future — ideally, in a safer context.