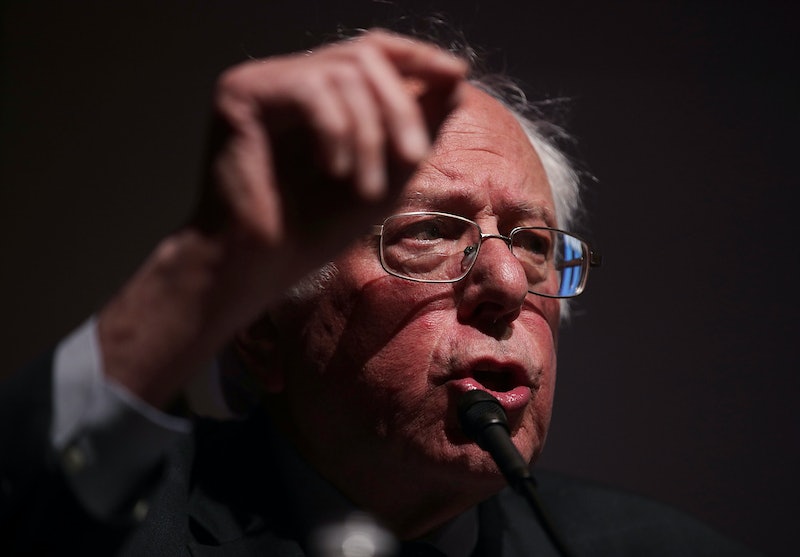 Following the White House's announcement of the dismissal of its FBI Director on Tuesday night, politicians across party lines have spoken up about concerns over the timing of James Comey's firing. In particular, Bernie Sanders wondered what the Trump administration could be hiding, especially because Comey's exit could affect ongoing investigations into alleged Russian interference during the 2016 election. The senator's press office released a statement on Tuesday, expressing concern over the administration's decision.

Donald Trump's decision to fire FBI Director James Comey raises serious questions about what his administration is hiding. Why did President Trump fire the person leading the investigation into possible collusion between his campaign and the Russian government? I find it deeply troubling that this decision comes a day after damning testimony by former acting Attorney General Sally Yates on Russia's ties to the Trump campaign and just days before Comey was scheduled to appear before the Senate Intelligence Committee.

Alleging that the current administration made repeated attempts to "kill inquiries" into Russia's involvement in the U.S. election and doubting the possibility that a successor hand-picked by Trump could be objective, Sanders also encouraged Americans to call for an independent investigation into the case. Trump, who has denied having ties to Russia on several occasions, recently called the allegations "a total hoax." (Bustle has reached out to the White House for comment.)

Sanders is in good company, as many of his colleagues also expressed concern over the timing and reasoning for Comey's firing — taking to the the Internet Tuesday night to call the situation "outrageous," "Nixonian," and "a big mistake" on the part of the president. The consensus among these critics was also to urge (once again) for an independent investigation led by a special prosecutor outside the attorney general's office.

Although more and more major political players like Sanders are beginning to step up and call for a closer examination of Comey's abrupt firing, the uncertain future of investigations into potential Russian interference (and any allegations of attempts at a cover-up) remain.