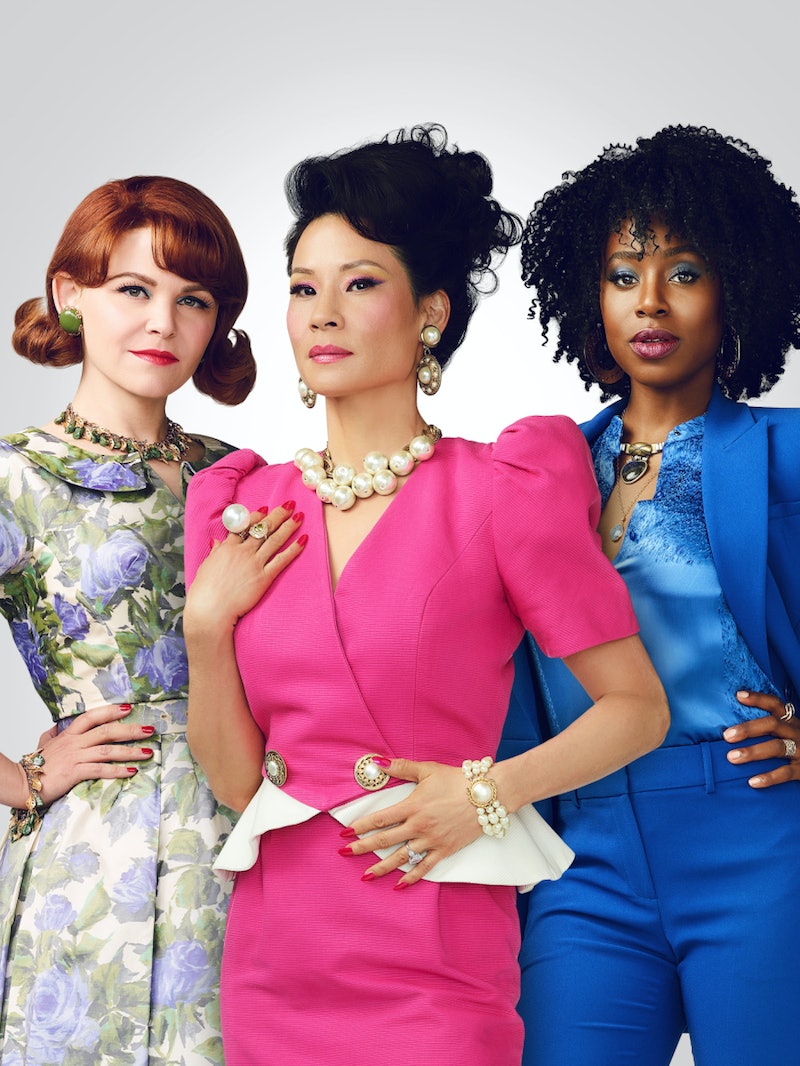 Spoilers ahead for the Why Women Kill Season 1 premiere. CBS All Access' soapy new murder mystery, Why Women Kill, follows three women who are at once vastly different and intimately connected. There's Beth Ann (Ginnifer Goodwin), a naive '60s housewife; Simone (Lucy Liu), a dramatic '80s socialite; and Taylor (Kirby Howell-Baptiste), a present-day lawyer in a polyamorous relationship. All three live in the same lavish house — albeit in different decades — and discover that their husbands have been unfaithful in their own ways. But they also share a much subtler link: though their husbands are the ones straining their marriages, all of the emotional labor falls to them.

We see this most clearly with Simone. As a logical woman concerned with appearances, her first reaction upon discovering photos of her husband Karl (Jack Davenport) and his male lover is to make an immediate plan for divorce. "Here's what's going to happen. You will go upstairs and begin packing, and I will tell our guests you have some sort of headache ... It's crucial they know nothing of this," she tells him. In response, Karl meanders upstairs and attempts to rather dramatically overdose. The ensuing scene with the ambulance outside their home draws the exact attention that Simone was hoping to avoid, and doubles down on her fear that she is, indeed, an outsider amid the social elite. Though it's not mentioned explicitly, Simone is notably the only woman of color among her circle of friends, and the snootiness they display towards her tell us that the only thing giving her social cachet is having a respectable relationship with a rich man. When that's almost taken away, her supposed friends act openly nasty.

Taylor's relationship issues are similar, though her open marriage with Eli (Reid Cohen) is more modern. As the main breadwinner of the household, she is, quite literally, doing most of the work, and she's often shown stressing over her long hours in court. When she comes home, she and Eli bicker about hanging up clothes; despite him having plenty of time to pick up around the house himself, he doesn't fully grasp that Taylor is simply too tired to do the same. But when the roles are reversed, Taylor is quick to coddle his ego, telling him "that's something" after he admits he only wrote a few pages all day. When Taylor's girlfriend Jade (Alexandra Daddario) is introduced to the mix, the divide between the two spouses is only broadened: Taylor puts in more time at work, but Eli finds himself further distracted from his writing because he's too busy ogling Jade.

Finally, there is Beth Ann, who is is perhaps at the biggest disadvantage of the three women. She has the least amount of social mobility and financial freedom, which makes finding out that her husband Rob (Sam Jaeger) is cheating particularly devastating. Though she is quite clever, as a woman in the '60s, she has no marketable skills outside of being a wife. So, her only option is to stay with Rob and figure out how to mitigate his indiscretions while minimizing the damage it will do to her.

Essentially, she, Simone, and Taylor are all carrying the weight of their relationships while their husbands act out on their every whim — careless of any consequences, and also the fact that their actions are hurting their wives more than them. The result? All of the women show signs of stress, passive aggressiveness, and frustration toward their husbands, which on a show called Why Women Kill, isn't likely to end well for anyone.