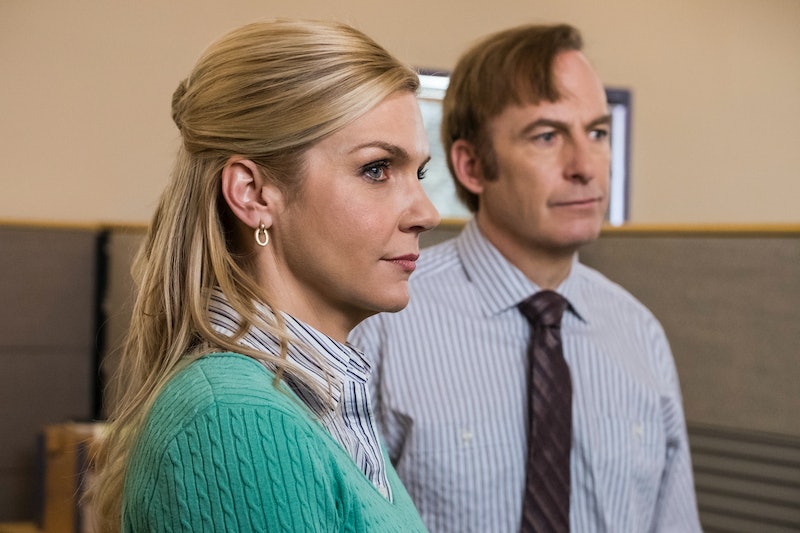 Spoilers for the Better Call Saul episode "Piñata" ahead. When a character dies in the Better Call Saul and Breaking Bad universe, they are never truly gone. In the opening scene of "Piñata," Chuck returns to Better Call Saul courtesy of a flashback to his heyday at Hamlin Hamlin & McGill. Executive producer Melissa Bernstein confirmed at the AMC Summit in New York City back in June that Michael McKean would reprise his role after his character's suicide in the Season 3 finale. And while Chuck's reappearance is short-lived, the time jump gives valuable insight into the surviving Better Call Saul characters.

The episode kicks off with Jimmy and Kim working at the mailroom of HHM. As the Oscar pool that Jimmy is running reveals, the year is 1993 (Howards End and Scent Of A Woman are up for awards) — approximately a decade before the current events of Better Call Saul. Chuck hasn't been afflicted with his electromagnetic hypersensitivity yet and it has been at least a few months since he got his younger brother out of jail. As Season 1's "Nacho" showed, Jimmy was facing property damage, assault, and sex offender charges for what he calls doing a "Chicago sunroof." (As Esquire reported, this term for defecating through's a car's sunroof was created by the Better Call Saul team.) Chuck had agreed to help Jimmy as long as he would stop his Slippin' Jimmy antics. In the Season 1 finale, Jimmy tells his friend Marco how he's moving to Albuquerque to work in the mailroom at Chuck's law firm.

Based on the timeline, it's unsurprising that Chuck isn't interested in humoring Jimmy in "Piñata," since less than a year ago, his brother was sitting in a jail cell. Yet, it's interesting to note how Kim responds to Chuck's behavior. While future Kim will condemn Chuck for the way he disregards Jimmy, this version of Kim doesn't seem bothered by Chuck's disdainful treatment of his little brother. Instead, Kim wants to make a good impression on Chuck, who — despite Kim being a diligent, hardworking, and intelligent law student and employee — doesn't even know her name.

The flashback shows how eager and ambitious Kim was at the beginning of her law career — and it connects to the career decision that she makes in the present. When she sees Jimmy's drawings of the Wexler McGill logo, she calls a meeting with Richard Schweikart to propose a way that she can join his firm. This could be seen as a setback since her character was praised for doing her career her way in Season 2 when she refused Schweikart and Cokely's offer, left HHM, and started her own law firm separate from Jimmy. But Kim's life is different in Season 4 and after hitting some rough patches, she's reevaluating what will make her happiest. And having associates at Schweikart and Cokely focus on Mesa Verde while she does defense attorney work — and gets paid well for it — is a smart move on her part.

Kim needs to do what's best for her and not be bogged down by Jimmy. And while he's disappointed that Kim is moving forward without him, her decision sets him further on his path to Saul Goodman. Saul is a balance of con artist and smart lawyer. In the present, Jimmy does some illegal conning as he purchases more pre-paid phones with the $5,000 that Chuck left him. But in the past, Jimmy heads to the HHM library. Because even though his brother will never approve, Jimmy has a secret desire to become a lawyer.

Jimmy's decision to further his criminal dealings with the pre-paid phones also leads him to give Howard Hamlin a pep talk. As the flashback reiterates, Chuck was always the legal mastermind of HHM while Howard was the suave salesperson. When Jimmy goes to pick up his check, he learns that HHM is downsizing. He berates Howard for giving up on his company and it seems Jimmy's insults could motivate Howard. It's the first time in Season 4 that Jimmy really has his Saul swagger back in place. And it highlights how despite his many setbacks, Jimmy has always had perseverance and tenacity on his side.

Although Chuck is only briefly in "Piñata," his appearance further displays how Jimmy, Kim, and Howard have changed over the years — and how much they have stayed the same. And as Season 4 continues, Better Call Saul may just show more of how Chuck influenced these major characters.