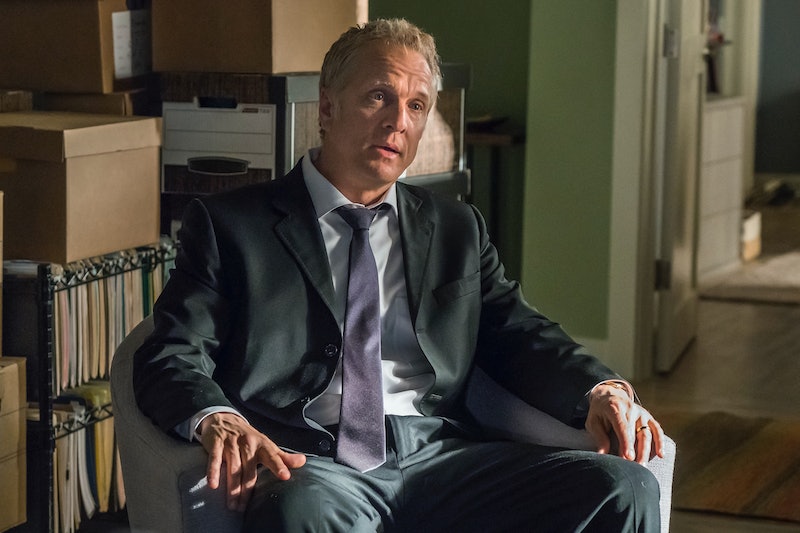 Jimmy McGill must face the death of his antagonistic brother Chuck in Season 4 of Better Call Saul. Although he wasn't Chuck's brother by blood, Howard Hamlin is also dramatically impacted. According to Patrick Fabian, Howard deals with Chuck's death on Better Call Saul right off the bat in Season 4. Howard bought Chuck out of their law firm in Season 3, which led to Chuck's relapse and his eventual suicide. Surviving characters Howard, Jimmy, and Kim may not fully understand the devastating circumstances surrounding Chuck's death, but Fabian says that the absence of Chuck — and the actor who portrays him, Michael McKean — is intensely felt when Season 4 premieres on Aug. 6.

"Last year, most of my scenes were with [McKean]. And so it really felt like a limb being lost — it was like a death in the family," Fabian says, speaking over the phone. "I love working with mighty Michael McKean. I got better every time I had a scene with him, there's no doubt about it. He's fun, intelligent, smart. I aspire to be him. And not to have him next to me, it hurts. ... It hurts as a friend because I developed a relationship with him over the last three years ... which makes it even worse not to be able to suit up alongside of him."

Yet, Fabian teases something that the people behind-the-scenes of Better Call Saul have already revealed — that Chuck will return for Season 4. Executive producer Melissa Bernstein confirmed at the AMC Summit in New York City in June that McKean appears again. But Fabian specifies that any appearance of Chuck will only be through flashbacks.

"The show has established time shifts in its storytelling capabilities, so I don't think we've seen the last of him," Fabian says. "But we're not seeing him in the future — that's for sure. Because that is the end of him."

As for whether Howard will appear in these past scenes with Chuck, Fabian declines to say.

"The way we shot it, the last time I saw Chuck was the last time I saw Chuck on the show. We shot that last scene on the last day that I worked with Michael and I was up on that balcony applauding and turning my back on him as the door kicked him on the ass on the way out. That was the last I saw of him! ... So when we came back to work this year, I think there was that weird denial of what went down," Fabian says. "And we are picking it up from where we left off and all of sudden, I'm like, 'Oh, wait a second. Chuck's not here. McKean's not here.'"

"He's gone and having that fourth plank between the four of us — Kim, Jimmy, me, and Chuck — you would have shifting alliances or shifting whatever, but there was sort of a balance and you took one of those out," Fabian says. "And as much as he sucked in a lot of our energy, caring, and emotion while he was alive, I think Season 4 deals very much with the idea of, 'What happens when that absence is there? What fills that vacuum?' And how do people start immediately or slowly coming to terms with either rewriting history or trying to find out who's culpable on this sort of thing? We deal a lot with that right out of the gate."

"We get this right out in the very first episode, as a matter of fact — we really get some positions and some unexpected positions, I would say, that come out about what happened," Fabian says. "Resolutions of what exactly happened, how it happened definitely get examined without a doubt."

Howard may be experiencing feelings of guilt about Chuck's death due to the cruel way they ended things. "There was nothing worse that I could have done to him by taking my own money to buy him out. However, I don't think I thought the ramifications would lead them all the way to where they led them," Fabian says. "And I think we're gonna find out how Howard's gonna cope without Chuck."

Because while the law partners had been at odds, Fabian theorizes that they might have been willing to reconcile. "It seemed very final, but nothing's really final," he says. "And there's always that hope of, were Howard and Chuck going to convene in six months? Would cooler heads prevail? Can we do something that would force them together once again to become comrades in arms? And now those options, of course, are off the table."

While Fabian doesn't reveal how Chuck's death affects Howard and Jimmy's relationship, he does acknowledge that the dynamic between Howard and his former protégé Kim will continue to change. He refers to how his character really "lost his cool" when Kim tried to pay Howard back for her law school loans at a restaurant in Season 3. And AMC teased how Chuck's death will put them "on opposite sides of a battle sparked by the Brothers McGill" again. "Whatever button she's pushing is deeply rooted," Fabian says. "And in this season, you definitely see a bit of role reversal. You see definitely different colors of Howard. Howard is not as in control as Howard would like to be."

As for how Howard will continue to be involved in the prequel series as it edges closer to the Breaking Bad timeline, Fabian calls it a "fool's errand" to try and figure it out — even for himself. But he does note, "There's a zillion different ways you can always have me in touch with Jimmy and/or Kim and/or any other people," and then states how perhaps Howard could even have a connection to Gus Fring.

Although Howard is not in Breaking Bad, it seems he will have plenty to do in the aftermath of Chuck's death based on Fabian's responses. And while Howard mourns his law partner in the Season 4 premiere of Better Call Saul, Fabian is personally glad that it wasn't his character who was killed off. "Anytime an actor gets killed in a show, every other actor's first reaction — let's be clear here — is, 'Oh, sh*t I'm glad it's not me,'" he says with a laugh. So as long as the memory of Chuck lives on, Howard will continue in the Breaking Bad universe.