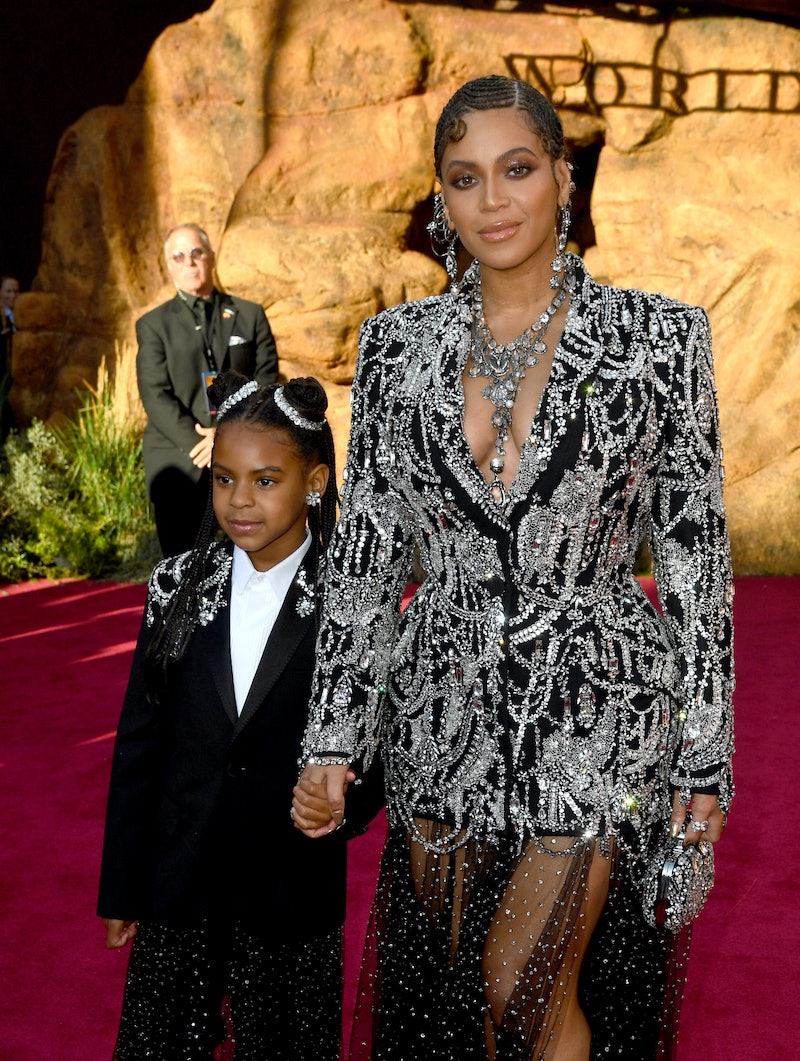 Just in case you weren't already aware, Beyoncé and her eldest daughter with Jay-Z, Blue Ivy Carter, share one of the most adorable mother-daughter bonds in Hollywood. And, as ELLE noted, Beyoncé and Blue Ivy are so similar that they, unsurprisingly, have more than one fun trait in common.

Beyoncé and Blue Ivy actually share so many traits, according to a People report published on July 24. According to the publication, the 7-year-old doesn't just take after her mom when it comes to her affinity to music, she also takes after the "Halo" singer's personality as well. “She is very sassy, high energy and knows what she wants," a source told People. Doesn't that description remind you of a certain superstar singer?

The source went on to say that Beyoncé and Blue Ivy get to share so many exciting things together, such as award show moments and red carpet outings (just as they did recently for The Lion King's Hollywood premiere on July 9). The insider told People:

“Especially after the twins [two-year-olds Sir and Rumi] were born, Beyoncé made sure that Blue was able to embrace her new role as a big sister. She also lets her go to video shoots, award shows and music recording. They have a very special bond!”

As previously mentioned, the mother-daughter duo aren't just total twins when it comes to their personalities, but Blue Ivy is also following in her mom's footsteps when it comes to her love of music. “Of course both Beyoncé and Blue love music. Blue loves singing, dancing and performing. She is a natural," the same source told People. Would you really expect anything less from Queen Bey's daughter (who has already proven her talents, by the way)?

Most recently, Blue Ivy got to put her talents on display by appearing right alongside her mother in the singer's music video for "Spirit," one of the tracks off of Beyoncé's Lion King album, The Lion King: The Gift. In the music video, footage from the Disney film, which features the superstar lending her voice to the character of Nala, is interwoven with images of the beautiful African landscape. The music video also features Blue Ivy, holding her mom's hand and sitting right next to the singer, as the two don matching red and pink-hued looks. In other words, the music video was an instantly iconic moment for both Beyoncé and her daughter.

On another track from Beyonce's The Lion King: The Gift, "Brown Skin Girl," Blue Ivy started and ended the inspiring song, which served as a celebration of the beauty of black and brown women and girls. She could be heard singing, along with the talents of WizKid and SAINt JHN, "Singin' brown skin girl / Your skin just like pearls / The best thing in the world / I never trade you for anybody else, singin'..."

Not only did the youngster sing in the track but, according to Genius, she also received a writing credit for it. So, the song doesn't just serve as a positive message to the legions of Queen Bey fans out there, it's also yet another beautiful example of Beyoncé and Blue Ivy's close bond.

Clearly, Blue Ivy is already well on her way to following her mom's lead when it comes to her singing career. And, based on People's latest report, that's just one of the many ways that Princess Blue is taking after her mother, Queen Bey.