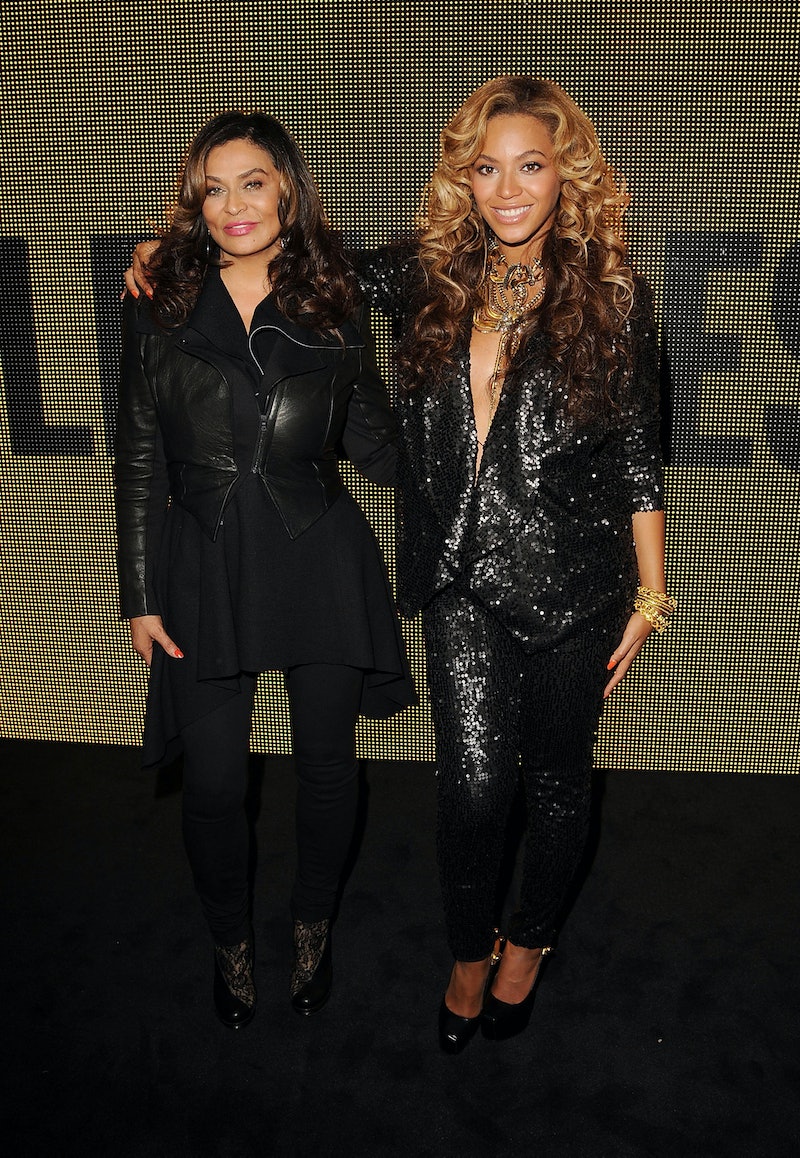 Despite being one of the biggest superstars in the world, it turns out that Beyoncé keeps in touch with her loved ones via a family text thread — just like the rest of us. During a recent interview on Maria Shriver’s Meaningful Conversations podcast, Bey's mom, Tina Knowles Lawson revealed that her group texts with Beyoncé, Solange, her niece Angie Beyincé, and Destiny's Child member Kelly Rowland help keeps them connected on current events, family matters, and everything in between. Per Essence, Knowles Lawson explained,

“It’s like I have four girls. And it’s so funny because we are always on group chats. And we’ll be on a group chat for two hours, just going back and forth and laughing about something or being sad about something.”

It's hard to even imagine what kind of awesome conversations take place in a group chat between this tight knit clan. From throwback family photos, to new snapshots of Bey, Solange and Rowland's adorable kiddies, and maybe, just maybe, a bit of girl gossip about their respective hubbies, you can certainly bet that their entire thread is nothing short of amazing.

More recently, the family used the thread as a source of comfort, chatting about the tragedy of rapper Nipsey Hussle's death. Speaking with Shriver's podcast, Knowles Lawson shared, “He was such a great guy that the whole community is sad, but it’s really comforting to be able to be on that group chat and talk about it,” she continued. “It’s like counseling.”

Although the topic of most their group convos is merely speculation at this point, one could also surmise that both Bey and Solange jump on the chat often to collectively discuss some of their mother's magnificent Instagram posts. Knowles Lawson, unlike her daughters, has become notorious for sharing lots of details about her personal and family life with her 2 million plus Instagram followers, once offering fans an awesome impersonation of Tina Turner that many won't soon forget. The was also the time when she posted and quickly deleted video of an intimate gathering which featured Beyoncé, Jay-Z, Angie Beyincé, and other family members and friends doing the electric slide to the Frankie Beverly & Maze classic "Before I Let Go." There's no doubt that her notoriously private children had a lot to say about that one.

Although it's hard to say what it is that bothers them about the 65-year-old fashion designer's posts exactly, it's been well documented that both Beyoncé and Solange haven't been fond of their mother's social media presence for years. While appearing on Entertainment Tonight alongside her husband, Richard Lawson in February 2017, Knowles Lawson revealed that her daughters absolutely "hate" some of her social media posts.

Her husband explained, telling ET, "From time to time, she will do that foot in the mouth thing, and it will be completely embarrassing... and then you'll get that phone call: 'Mom.'''

"All the time," Tina added, while explaining that most people can relate to her social media mishaps. "I make mistakes, but I'm just real about it. That's what 60-year-old moms do on social media. So everyone can relate to that, because they're like, 'My mom does the same thing,''' she concluded.

Although Beyoncé prefers to keep her private life, private, you can always count on Ms. Tina to reveal just how normal and down to earth Queen Bey really is.