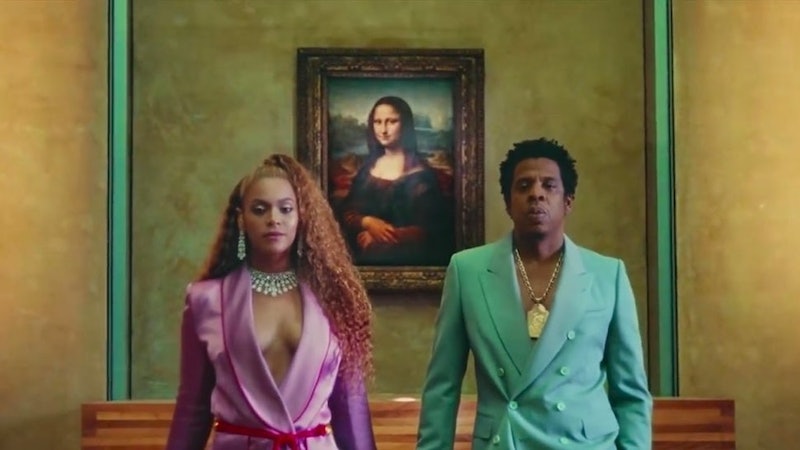 Beyoncé and hubby Jay-Z released their first studio album together last year entitled Everything Is Love, and the world, of course, fell totally in head over heals for it. But as well as capturing the entire world's attention, it looks as though Everything Is Love unintentionally helped out a famous French gallery, too. Beyoncé and Jay-Z boosted visitors numbers for the Louvre thanks to the success of their Ape*shit music video.

A record number of people visited the Louvre last year, and the gallery gave partial credit to Queen B and hubby Jay Z's music video in a statement about their 2018 figures. The statement read:

"The Musée du Louvre had a record 10.2 million visitors in 2018 — an increase of 25% in comparison with 2017 ... The recovery of tourism in France — specially in Paris — boosted visitor attendance in 2018, as did the flagship exhibition Delacroix (1798–1863). Elsewhere in the world, interest in the Louvre was bolstered by the Louvre Abu Dhabi (which recently celebrated its first anniversary), and by Beyoncé and JAY-Z’s Apes**t video, with its tribute to some of the museum’s greatest artworks."

As per, the Carters did what they do best and dropped an entire album on their own terms last year — and, of course, the fans were not ready. Beyoncé is now basically known for the humble album drop, leaving the world scrambling and trying pick their jaws off the floor. In the past, she has done this with her eponymous album released in 2013 and of course with Lemonade in 2016, both visual albums. Jay-Z is also a fan on the visual album, releasing 4:44 in 2017.

Everything Is love is basically the end of a trilogy, wrapping up Lemonade and 44:4 in a neat little bow. And Apesh*t was the lead single released from the American duo's first joint album. The tune had a whole new vibe, completely different to both of the stars' individual work, which really cementde The Carters as a group all of their own. In fact, the pair won Best International Group at the Brits Awards in February. Apesh*t had more of a trap sound, and this could be because of a all the great collaborators including co-producer Pharrell Williams and some ad-libs from Quavo and Offset from the group Migos.

As much of a bop as the song is, the video for Apesh*t was truly spectualcur. Directed by Ricky Saiz, with British-Nigerian filmmaker Jenn Nkiru credited as second unit director, the music video was filmed all over the Louvre. The couple sported fabulous outfits, including Jay Z in a suave mint-green suit and Beyoncé in a hot pink one while the couple stood in front of the Mona Lisa. The six-minute video has now reached more than a staggering 160 million views.

And this isn't the first time Beyoncé has raised the profile of a company, product, or business through her music. Back in 2016, after mentioning American restaurant chain Red Lobster in her surprise song Formation, Red Lobster sales went up by 33 percent, Forbes reports. The queen of music also unintentionally boosted sales of lemonade after the success of her album of the same name, according to the Independent.

According to the Art Newspaper, the Louvre is currently the most popular gallery in the world, coming in first place in front of the National Museum of China and the Metropolitan Museum in New York City. The Tate Modern in London has moved up by one place, coming in as the fifth most popular art gallery in the world. The National Gallery also rose up by one place in 2018.

Of course, anywhere Beyoncé and Jay-Z grace with their presence will become a monumental sight!

More like this
What Is Shakira’s Net Worth? These Figures Definitely Don’t Lie
By Maxine Harrison
Rihanna Just Made Her First Official Outing Since Becoming A Mother
By El Hunt
Michael Bublé Fans Are Raging After They Missed His Gig Due To Traffic Jams
By El Hunt
George Ezra’s “Green Green Grass” Was Inspired By A Special Christmas Memory
By Frances Stewart
Get The Very Best Of Bustle/UK