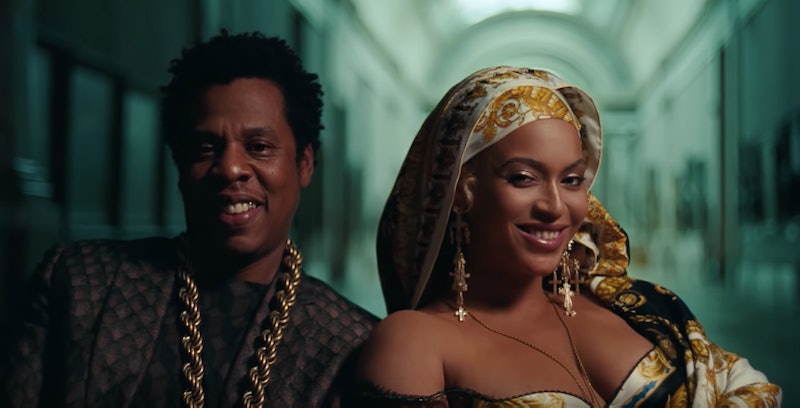 Lorde might have a song called "The Louvre," but Beyoncé and JAY-Z saw the "Melodrama" track and raised her. They dropped the video for "Apesh*t" as a surprise companion to their Everything is Love album on June 16, and it boasts a unique filming location. But when did Beyoncé and JAY-Z film at The Louvre? Industry publication Variety stated that the video, which was directed by Ricky Saiz, was filmed at the Paris museum just last month. That would mean they filmed it throughout May 2018. Despite having a tentative timestamp, Saiz's Instagram account doesn't offer any insight. Neither does Beyoncé's, for that matter. The YouTube video for "Apesh*t" doesn't explicitly state when it was filmed either.

There are some things fans know for sure. They couldn't have filmed it anywhere near Beyoncé's stunning performances at Coachella, for instance, and that pretty much rules out April 2018. Before then, she was likely preparing the blessings she would bestow upon the Coachella Valley — surprise Destiny's Child reunion included — so she probably would not have had the hours in the day that the "Apesh*t" video necessitates. That means the famous couple filmed what is by all accounts a music video masterpiece as recently as one month before its surprise June 16 release.

If Beyoncé and JAY-Z did film their new music video at the Louvre in May 2018, that wouldn't be too hard to believe. That would mean they filmed after Queen Bey's iconic Coachella performances, but with weeks left to go before the pair kicked off their 2018 global tour. Anyone who watched the documentary she released in 2013 knows how much effort goes into a single performance, so it's obvious that having enough time to plan and execute her vision for the next tour is crucial. It's likely that she also knew the project with her husband would be scrutinized by the media. She's a perfectionist — well, she's perfection in general, but also famously a Virgo — and there's no way Bey was going to drop another music video with her husband if it was anything less than #flawless.

Then, of course, there's the Cannes Film Festival. The festival takes place in early May every year, and draws hundreds of the world's most recognizable members of the film industry to the coastal French town. With all eyes — media, public relations, press, fans, etc. — trained on the festival's awards and attendees, no one would be paying attention to a little music project happening eight or so hours north of the event. The 2018 Cannes Film Festival took place from May 8-19 this year, which means there were, at minimum, 11 straight days where the entertainment industry's attention was fully attuned to people, places, and things that were not Beyoncé. So they may have filmed at the Louvre in that period. (It's like an eye of Saruon situation, but in the best possible way.)

Further, the Louvre is traditionally closed on Tuesdays. Two Tuesdays — May 8 and May 15 — fell during Cannes. Again, this is all speculative, but since Variety is reporting that the couple shot the "Apesh*t" video in May 2018, those dates make the most sense. The museum would already be closed to the public and the media were busy covering Cannes. The place wouldn't be swarming with tourists or lookers-on, since everyone would already know the museum was not open to the public. It's genius — much like Beyoncé herself.

Assuming the "Apesh*t" music video filmed at the Louvre in May, and assuming it only took one or two days of shooting to complete, May 8 and May 15 are the likeliest candidates. That would leave plenty of time for the Knowles-Carter family to make it back to America for public appearances before fans knew anything was up. Beyoncé and JAY-Z would also have several weeks left to put the finishing touches on their On The Run II tour, before it kicked off in Wales on June 6. As with so many aspects of the Knowles-Carter relationship, though, maybe the truth behind how they pulled off the "Apesh*t" video is better left a mystery.

More like this
Taylor Swift Wants To Direct A Movie Next — But You Might Have To Wait
By Radhika Menon
Everything To Know About Taylor Swift’s 10th Studio Album, 'Midnights'
By Grace Wehniainen and Jake Viswanath
Twitter Is Freaking Out Over Rihanna’s 2023 Super Bowl Halftime Show Announcement
By Stephanie Topacio Long
The Spice Girls Just Dropped A Brand New Music Video
By Sam Ramsden
Get Even More From Bustle — Sign Up For The Newsletter