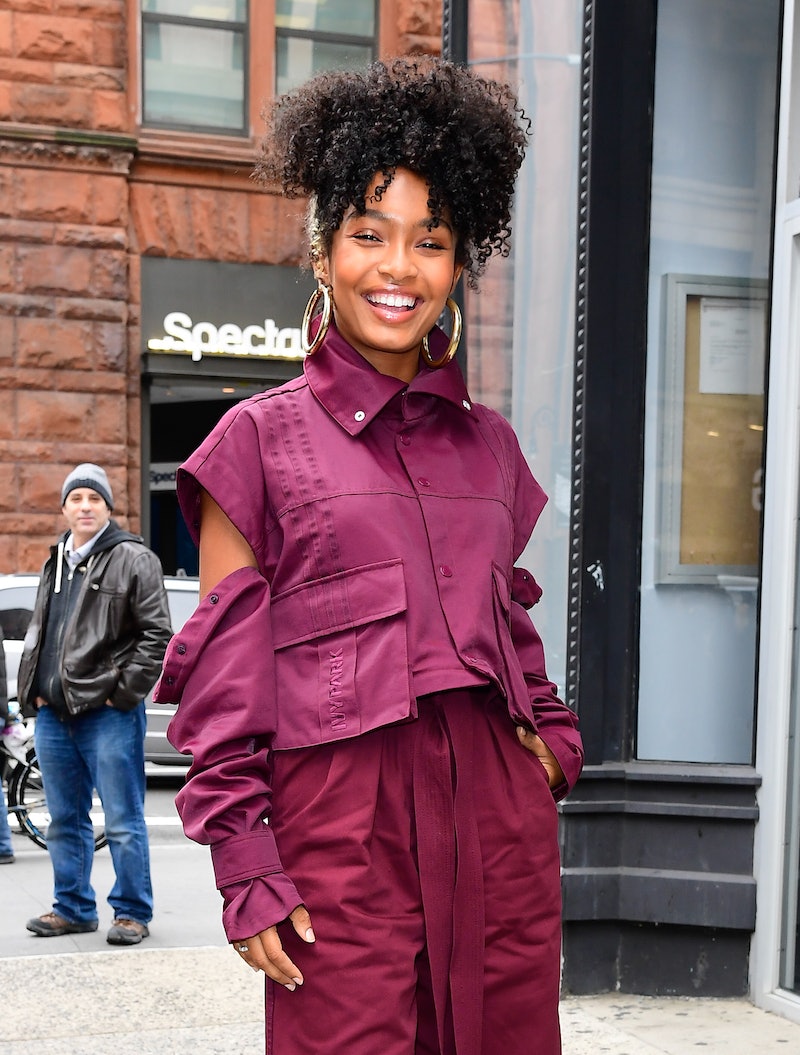 In case you missed the news, Beyoncé's Ivy Park is relaunching under the Adidas banner, and the collection looks so good. Like all things Beyoncé does, though, every detail of the upcoming launch has been epic. Yara Shahidi's Ivy Park unboxing proves it.

In an IGTV video, Shahidi revealed that Queen Bey sent her a special delivery: an entire clothing rack filled with Ivy Park pieces. Yes, she sent a full-size clothing rack full of pieces Shahidi could rock.

Shahidi's unboxing begins in what appears to be her home's foyer, where she actually has to wheel in the rack of Ivy Park clothing. In the first few moments, the collection is covered in thick, bright orange fabric that's buckled down the side and tied with an Ivy Park x Adidas eggplant strap. Shahidi unbuckles it and begins to slowly unsnap the buttons on the fabric, smiling at the camera as she does so.

Finally, she is able to get everything unbuckled and unsnapped, and she starts teasing the camera with the flaps before turning and smiling to say, "I think it's the whole collection." Turns out that yes, it was every single item from Ivy Park.

Slowly, Shahidi flips through the items, which are pristinely kept in garment bags (again, this is Beyoncé, are you surprised she's so thorough?). Looking through the pieces, she tells the camera, "That's pretty incredible," before going to thank her "Ivy Park fam, Beyoncé, the creative genius, to my Adidas fam. This is kind of epic."

According to the official Instagram page for the brand, all of the pieces will be available beginning Jan. 18. Shahidi just happened to get an epic sneak peek.

While yes, Beyoncé's Ivy Park isn't new, it is relaunching in collaboration with Adidas and creatively controlled by the artist. As part of her Elle cover story for January, Beyoncé told fans who interviewed her for the magazine that the new range is all about versatility and will feature gender-neutral designs. She also gave a peek at the sweats, joggers, jackets, harnesses, and accessories that make up the line.

We can't all have a rack of Ivy Park show up at our house. However, you can start shopping Beyoncé sportswear line Jan. 18 and have a little piece of the icon with you.