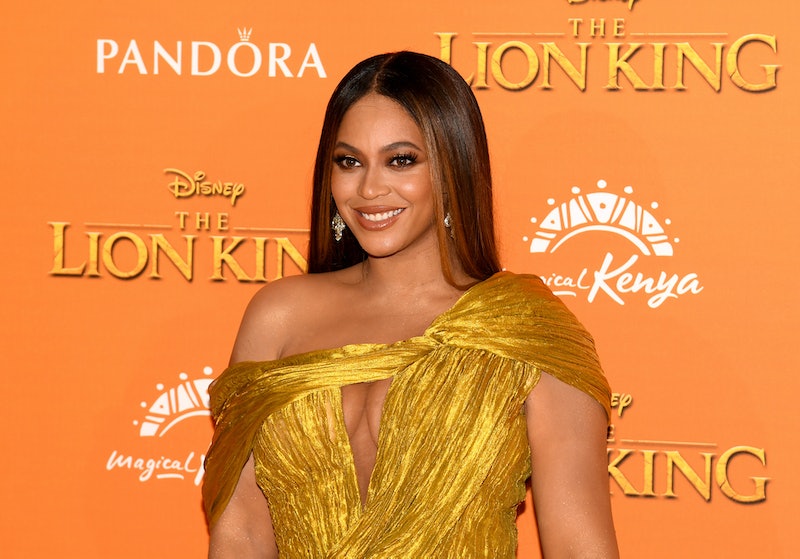 Beyhive, it's time to rejoice! Queen Bey has made her first appearance of 2020's awards season and it's major. Beyoncé's 2020 Golden Globes dress features massive golden sleeves, and while she may not have walked to the red carpet, it wasn't hard to miss the The Lion King star in the sea of celebs. After all, she is Beyoncé. She kind of stands out in a crowds, sleeves or no sleeves.

During the Golden Globes red carpet, there was no sign of Beyoncé, though fans knew the actor and singer was nominated this year for her song from The Lion King soundtrack "Spirit." The film itself also garnered a nomination for Best Motion Picture — Animated. With not one, but two technical nominations for the evening, Beyoncé's appearance isn't a total shock, but fans weren't sure she'd show.

During a shot of the crowd during the show, fans got their first glimpse of the singer in a next-level column gown. The dress featured a black column skirt and metallic golden bodice with a keyhole cutout. Perhaps the most obvious standout, however, were the voluminous sleeves.

Although there haven't been many Bey sightings on screen tonight, there have been just enough to suss out her entire look, including her accessories, which were minimal but consisted of a pair of diamond-drop earrings (that could, tbh, probably buy you a house).

Beauty-wise her skin was glowing with that signature Beyoncé dew. Overall, her look was both neutral and natural with warm tones on her eyes and a nude gloss on her lips. She wore her hair sleek, long, and down with an elegant middle part.

Although Beyoncé ultimately didn't take home the Golden Globe for "Spirit," she definitely took home a best-dressed spot with those golden sleeves.