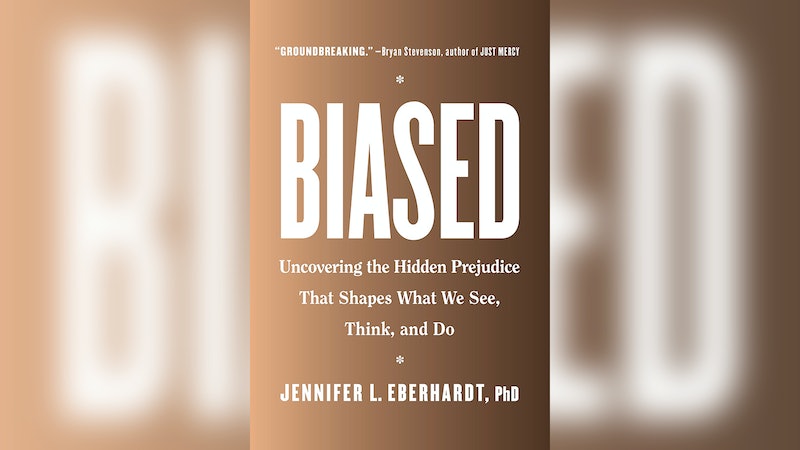 In recent years, the term “implicit bias” has gone mainstream. The general public’s understanding of it is growing, too, but many readers still have something to learn. That's where Biased: Uncovering the Hidden Prejudice That Shapes What We See, Think, and Do comes in.

The new book comes from Jennifer L. Eberhardt, Ph.D., a social psychologist and professor at Stanford University. To the book, Eberhardt brings her decades of research for an expansive exploration of what implicit bias is and where it comes from. She delves into the evolutionary reason for ingrained stereotypes and their affects, and then weaves in fascinating examples of the science that demonstrates them.

Biased is a reminder that no one is immune to implicit bias; Eberhardt argues that “we all have ideas about race … [that] are shaped by the stereotypes to which we are exposed on a daily basis.” And she certainly makes a strong case. She shows these biases at work, both in the real world and the research lab.

'Biased: Uncovering The Hidden Prejudice That Shapes What We See, Think, and Do' by Jennifer L. Eberhardt, PhD
Amazon

One fascinating (albeit discouraging) series of studies that she recounts, for example, looked at how ordinary people perceived the physical stature of black men compared to white men. While being shown photographs, “study participants consistently rated black men as taller, heavier, and stronger than white men,” Eberhardt writes. In other words, they seemed to perceive black men as more serious physical threats — something that could lead to tragic results under the wrong circumstances.

Through such studies, as well as compelling real-life anecdotes and news stories, Eberhardt shows the devastating consequences that can stem from our biases. As part of that, she discusses why black men are more likely to be killed by law enforcement officials. Deftly drawing on her experience as a black woman and her 14 years of working with cops, she offers the perspective of both sides.

Eberhardt’s goal isn’t to demonize readers for their biases but instead to make them aware of their biases. The first step, she writes, is “understanding how implicit bias works and what it impacts.” The next is to learn to check yourself, which is the march harder of the two.

In many ways, Biased offers answers, but unfortunately, it contains no easy fixes. The issue is extremely complicated, as Eberhardt shows by laying out the myriad of factors involved, including our historical and cultural context. She does, however, offer thoughtful analysis of steps that have been taken to fight ingrained prejudice and the successes that have been achieved so far.

Ultimately, Biased is a valuable resource for understanding and explaining implicit bias. It is at once validating and eye-opening, disheartening and hopeful.