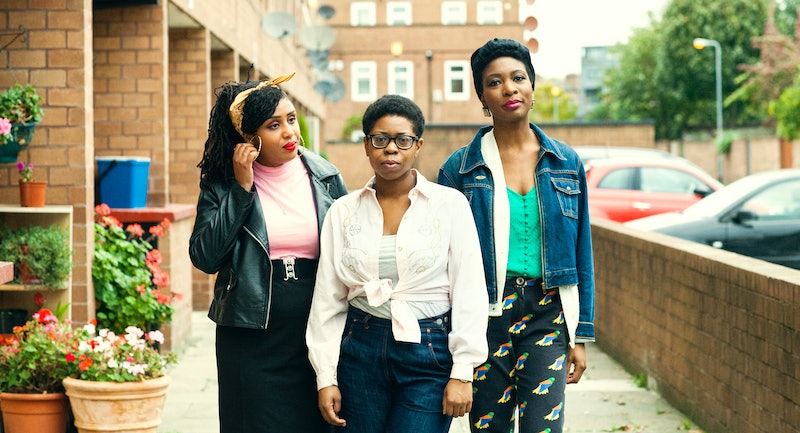 Growing up, loving alternative music, and being black felt like a lonely space to navigate. There were so many genres I enjoyed but I always felt like an outsider looking in. And while I knew there were political feminist punk bands, it still felt like the genre was pretty white and didn't include people like me. I had no idea there were artists in the UK in the genre I enjoyed, that reflected my political views and looked like me. Then I discovered Big Joanie.

You might have recently read about punk band Big Joanie speaking out in support for Stormzy. The rapper recently dropped out of snowboarding festival after claims his team was racially profiled, and Big Joanie had some really crucial points to make about racial profiling, and the way in which white musicians are treated differently to black musicians in the industry. Speaking to the BBC, band member Chardine Taylor-Stone said: "He could easily have sat quietly and done nothing but he's in a position of power in the industry now to actually make a positive change."

Comprised of singer and guitarist Stephanie Phillips, bass player Estella Adeyeri, and Chardine Taylor-Stone on drums, the band formed back in 2013. Phillips and Taylor-Stone actually met on Facebook, as Fader reports, and Adeyeri joined Big Joanie in 2017.

While punk has always been a pretty political genre, Big Joanie are showing how much black feminism is needed in the British punk scene. As Phillips explained during an interview with the The List: "The punk scene as I've known it was always very feminist and female-centred, but it was very white."

The band have described themselves as being “similar to The Ronettes filtered through ’80s DIY and Riot Grrrl with a sprinkling of dashikis.” They released their EP "Sistah Punk" back in 2014. Last year, their debut album "Sistahs" garnered huge praise from critics. Rolling Stones described it as "a record that’s bold, catchy, and arresting."

Big Joanie are black feminists and that really speak through their music. The band say that “[b]y making black punks more visible, [they] believe [they] can inspire more young black punks to start the bands they always wanted to hear.” The trio are unashamedly political and want you to know about it.

But Big Joanie aren't alone; there are a plethora of black musicians who have made waves in the punk scene, such as Poly Styrene from the band X-Ray Spex. Speaking to The List, Big Joanie's Phillips said she first heard X-Ray Spex at the age of 14. "I didn't understand all of the lyrics," she said, "but it was so aggressive and intense that I realised it was something I shouldn't let my parents hear." Phillips went on: "I was also influenced by Riot Grrrl … Bikinikill, Bratmobile, all those early '90s feminist punk bands. They taught me a lot about how to bring politics into art."

Big Jonie are a much-needed voice in a scene that often feels whitewashed. They are proving that punk music and black feminism truly do go hand in hand.