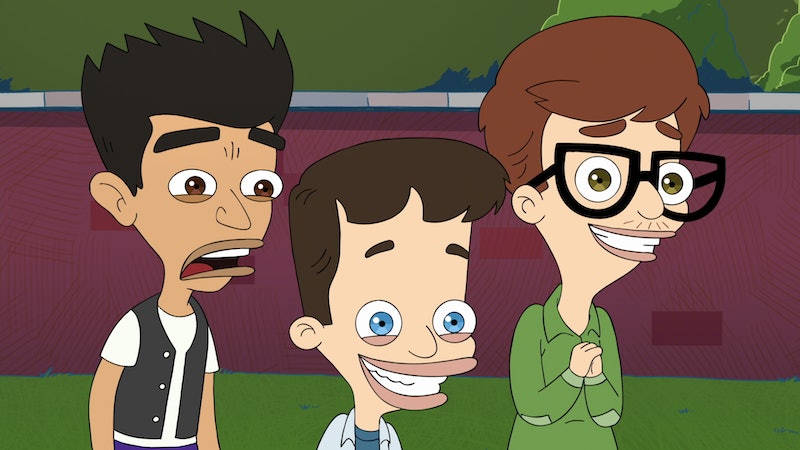 There's a lot of truth buried beneath Big Mouth's body hair and grotesque fluids. The show's first season was hailed for its frank yet funny depictions of daily adolescent traumas, and its second continues the streak. But while many TV comedies tend to put aside their humor when broaching more serious plot points, Big Mouth Season 2 proves that, even in its darkest moments, it can still laugh through the pain. Spoilers ahead for Season 2 of Big Mouth.

Throughout the entirety of Season 2, Jessi struggles with her parents' separation, lashing out at those around her and stealing makeup from convenience stores. But several emotional outbursts later, Episode 6 brings things to a somber head. While rooting around in her father's room in search of a CD to listen to, Jessi stumbles across some weed gummies, and, like many a teenager before her, decides to pocket them and share with Nick. After enjoying a day of drug-fueled antics, however, she arrives home to be confronted with the consequences of her mistakes.

Jessi's dad spends much of the first few episodes trying to repair his relationship with her mother, but leaving drugs out for their young daughter to find doesn't exactly inspire confidence. So, after he confesses that the drugs Jessi took were his, Jessi's mom kicks him out of the house. As he packs up his things and leaves, Jessi watches tearfully from her bed. The Shame Wizard — a new character whose sole purpose is to guilt-trip the show's teens — sits next to her, hounding her for what she did.

"Was it worth it, Jessi? Just to get 'hella faded?'" he sneers. "Your sweet, sad father thought he was going to win your mother back. Do you think that'll happen, now? ... It appears those 'good ol' days' are gone forever."

A defeated Jessi responds, her frail self-esteem shattered: "I never should've been born." It's the most emotionally wrought moment on Big Mouth thus far, but within seconds, the show cuts the tension.

"Also, you should've been more aggressive volunteering for Hilary Clinton. If you'd made a few more phone calls...who knows?" the Shame Monster piles on.

This choice contrasts with many of Big Mouth's contemporaries. Comedies like GLOW and Bojack Horseman by and large rely on punchlines, but drop them when they want to magnify any deeper emotional moments. There's not a single gag to be found when Bojack's titular horse grossly preys on his buddy's underage daughter, or deals with the grief of a friend's overdose he was responsible for. Instead, Big Mouth diffuses its sadness with humor, suggesting that pain does not impede our ability to laugh. And moreover, that those feelings can and often co-exist.

When talking to Bustle about Season 1, series creator Nick Kroll said that their goal was "first and foremost" to be funny, but also to make something that helped "people not feel alone." It's exactly these kinds of scenes that accomplish that. Whereas on shows like GLOW and Bojack trauma exists only in contrast to humor, on Big Mouth, it is the humor, mirroring how fluid and conflicting emotion can sometimes be. And ultimately, that's what makes audiences feel less alone.

More like this
Does 'Locke & Key’s Ending Mean There Could Be A Season 4?
By Sophia Moore
This New TV Show Revisits The Most Controversial True Story From Hurricane Katrina
By Brad Witter
'Yellowjackets' Just Announced Who’s Playing Adult Van & It’s Perfect
By Gretchen Smail
'The Capture' Is Finally Back – & S2 Looks Tense AF
By Sophie McEvoy and El Hunt
Get Even More From Bustle — Sign Up For The Newsletter