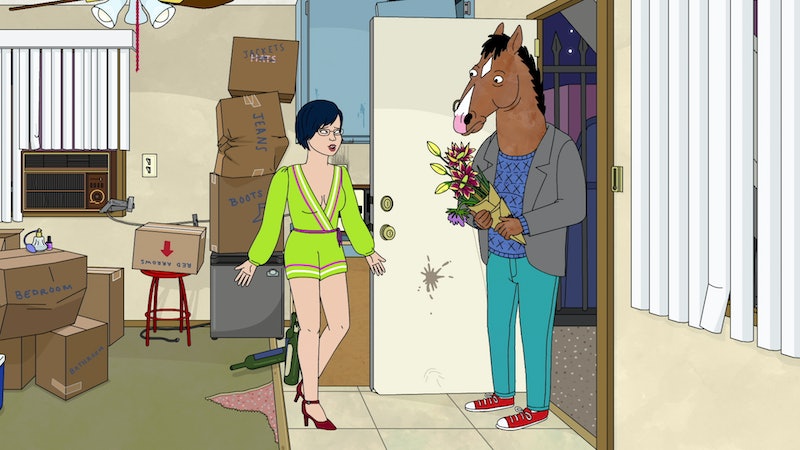 Spoilers ahead for BoJack Horseman Season 5. No matter how hard he tries, BoJack Horseman can't hate himself into being a good person. The fuel behind the ongoing narrative of BoJack Horseman has been the belief held by other characters, that despite BoJack's many misgivings, that he can somehow be better. But Season 5 suggests that this message of redemption may actually be harmful. Diane's relationship with BoJack in Season 5 changes as she begins to reflect on how she's enabled his harmful behavior.

An early episode of BoJack Horseman Season 5 introduces Vance Waggoner, voiced by Bobby Cannavale, who is a Frankenstein monster of cruel men, someone who spouts sexist and anti-Semitic language at a police officer, violently assaults a woman, and leaves his daughter a threatening voicemail. His presence in the show serves as a stand-in for the many men who were accused of predatory and abusive behavior towards women in the rise of the #MeToo movement.

Vance "retires from public life" for some time before attempting to stage a comeback. He makes his way into the world of BoJack, and eventually ends up in the crosshairs of Diane. Diane, when pressed for a way that Vance can "make things right," states that he can't. In Diane's mind there is no way for him to be absolved of his past — which forces her to confront the fact that she's allowed BoJack to move on with his life after committing unforgivable acts in the name of improving and "making things right."

"You can say it's your job, that you believe in forgiveness, whatever, but don't you at least a little bit think ... that when you, as a woman, give awful men the cover of your friendship when you work for them — first of all, they're not gonna get better, and second of all you are then complicit — no, you're culpable for the terrible things they do... "

Although Diane does not say as much out loud, her words about Vance reveal that if she did not know BoJack personally, she would be arguing that her best friend could never move past the pain he's cause others — and she realizes this. Soon after her first meeting with Ana, they reunite so that Ana can play her a tape. The tape features BoJack speaking about a horrible thing he did, years ago, in New Mexico — something that happened after she and Diane became friends. She doesn't say anything, but the look on her face makes her realization clear — she has been giving BoJack cover of her friendship, and he's done some terrible things under that cover.

Diane's critique extends beyond herself and goes on to target the audience of BoJack itself. The show asks: if we are celebrating a show centered around the horrible actions of BoJack, are we also culpable?

Most of Bojack Horseman Season 5 revolves around the production of Philbert, a gritty show about a troubled man who does horrible things starring BoJack Horseman, a troubled horse who does horrible things. At the show's premiere, BoJack announces, "What this show says, is that we're all terrible so therefore we're all okay, and I think that's a really powerful message." This forces Diane, who had been hired as a consultant on the show thanks to BoJack, to realize and confront the weight of what she's done by associating herself with Philbert, who is yet another extension of BoJack.

She helped create a show where a man who commits horrible acts is treated as someone worth empathizing with, which she realizes could help "dumb a**holes rationalize their awful behavior," as Diane says. In other words, we're trained through stories to root for troubled men. Some of the most celebrated narratives of the 21st century — especially on television — are explicitly about identifying with men who do terrible things. Consider Breaking Bad, Rick and Morty, The Sopranos, House of Cards, Ozark, Ray Donovan, Deadwood, Boardwalk Empire... and BoJack Horseman.

In the final episodes of Season 2, BoJack Horseman skips town to live in New Mexico, where he makes an advance on an underage girl. In Season 3, BoJack Horseman takes a sober former costar on a months-long bender that ends in her death, but not before tracking down and trying to reconnect with that underage girl. Diane confronts BoJack about both of these events at the Philbert premiere, and he claims that he is the true victim. He's the one who has to "live with this sh*t." He's the one who has to "feel the guilt all day. Every day." BoJack believes that he is "the one who has suffered the most because of the actions of BoJack Horseman."

Brought on in part to BoJack's ongoing struggle with addiction, BoJack reaches a new low when a choking scene in Philbert goes beyond acting and turns into BoJack actively strangling Gina. It's another in the long line of actions that he himself declares "unforgivable," and yet the season's final moments hint that if the show returns for Season 6, audiences will once again be asked to stick around and see if, maybe this time, BoJack Horseman will actually get better.

The season ends with Diane driving BoJack to rehab for his addiction, after telling him the same lesson that seems to escape BoJack season after season. "No one is gonna hold you accountable," she says. "You need to take responsibility for yourself." But perhaps Diane also had a role to play there.

Someone could walk away from BoJack Horseman and believe that the message is, "We're all terrible so therefore we're all okay." Diane's clearly struggles in trying to decide whether attempting to help BoJack get better absolves her of her involvement in his actions or further implicates her, and so does the show.

The show's portrayal of BoJack's struggles with depression is honest and unflinching, and Season 5 continues to show the dark reality of mental illness by highlighting BoJack's substance abuse, but this portrayal comes with a risk. Is BoJack a tragic hero whose actions should be forgiven because he's "working through something"? Should viewers (or Diane for that matter) concern themselves with BoJack's illness when his hands are around a woman's neck?

If audiences are expected to be entertained by stories like BoJack Horseman, it makes a certain kind of sense that real men accused of doing harm would try to sell their own comeback stories to the public to rejuvenate their careers. Diane has to face how she's enabled her flawed friend in Season 5, and it may be time for audiences to take a serious look at the kind of characters we celebrate.