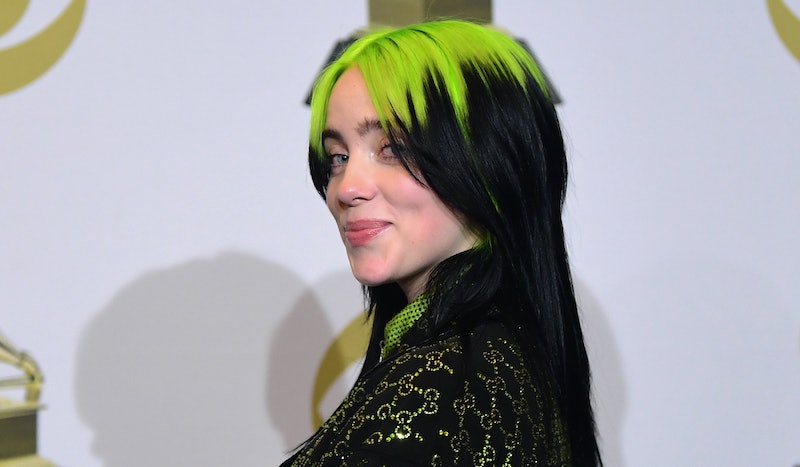 Billie Eilish is not here for all the online scrutiny of her friendships. In a Feb. 3 interview with Vogue, Grammy-award winning singer Eilish defended her texts with Drake, while calling out the internet for being too "sensitive." Last December, the "When the Party's Over" singer made headlines when she told Vanity Fair that she and the 33-year-old rapper Drake exchange texts. At the time of the interview, Eilish was 17, and some of her fans found the idea of a grown man texting her troubling.

As far as the now 18-year-old Eilish is concerned, anyone criticizing her friendship with drake needs to find something else to worry about. "The internet is such a stupid-ass mess right now," she told Vogue. "Everybody's so sensitive. A grown man can't be a fan of an artist? There are so many people that the internet should be more worried about."

She went on to call out Donald Trump supporters, adding, "Like, you're really going to say that Drake is creepy because he's a fan of mine, and then you're going to go vote for Trump? What the f*ck is that sh*t?"

Drake and Eilish's friendship could very well be innocent. In the Vanity Fair video, she listed off a number of other famous adult artists who are also in her phone. Of Drake in particular, she said: "I’ve only like texted him, but he’s so nice. Like, he does not need to be nice, you know what I mean? He's at a level in his life where he doesn’t need to be nice, but he is, you know?"

But part of the backlash surrounding their texts stemmed from the rapper's history of befriending teenage girls. In 2018, Drake made headlines after it was revealed that he exchanged texts with the then 14-year-old Stranger Things star Millie Bobby Brown. "He's honestly so fantastic. A great friend and a great role model," Brown told Access Hollywood in a red carpet interview at the time. "We just texted each other the other day, and he was like, 'I miss you so much,' and I was like, 'I miss you more.'"

Both Brown and Eilish have defended the "In My Feelings" singer against the backlash. However, Drake hasn't spoken on the subject. Fans of the two young stars, and journalists have spoken out on Twitter about their concerns that the 33-year-old could be engaging in grooming practices.

One user wrote, "Does anyone else think it’s strange that Drake just has Billie Eilish and Millie Bobby Brown’s numbers? It’s definitely possible he’s just being a role model and it has to do with marketing but why’s a 32 year old man texting girls under the age of 17." And another tweeted, "Are we ready to talk about Drake POTENTIALLY grooming young girls? Millie Bobby Brown (15) & Billie Eilish (17) both underage said that Drake (33) texts them. This is troublesome."

Despite the ongoing debate about whether it's appropriate for Drake to text with Eilish and Brown, the Grammy award winner's mind is clearly made up, and as far as she's concerned, who she chooses to be friends with isn't something the internet should be concerned about.