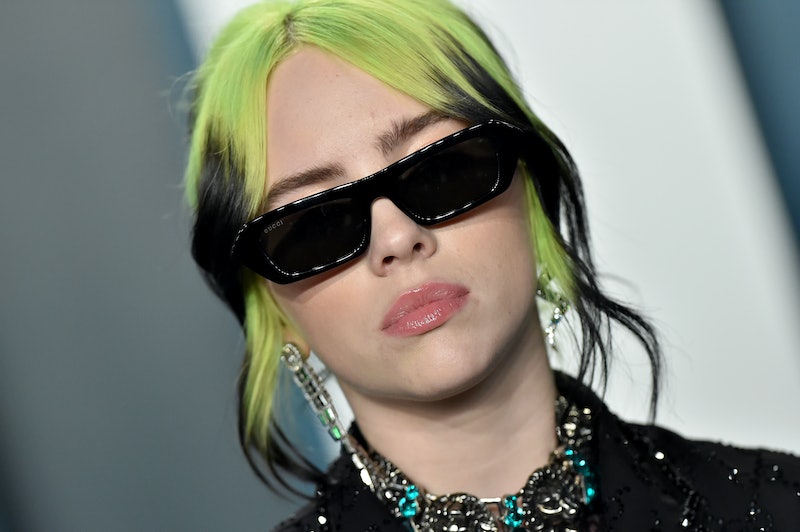 Start engraving that Best Song Oscar now, Academy, because Billie Eilish's No Time to Die theme song has arrived. And yes, it's a moody masterpiece befitting Daniel Craig's final film as James Bond. "No Time to Die" officially dropped on Feb. 13, making Eilish the youngest artist ever to perform a Bond theme.

Eilish and her brother Finneas wrote the song together, and the importance of crafting a song for the iconic franchise isn't lost on either of them. On a January episode of Billboard's Pop Shop podcast, Finneas shared that he and his sister have long been Bond fans. "The whole pairing is very authentic to my and Billie's relationship with those movies," he said. "We've always loved James Bond movies. We've always loved that character IP (intellectual property). The songs in the James Bond franchise have always been significant in their own right... those are songs that have bore real importance to our songwriting lives for years. It's like a dream come true to us."

That dream is officially a reality, and the siblings' song is a haunting ode to a love that isn't what it seems. Eilish sings: "You were my life, but life is far away from fair/Was I stupid to love you?/Was I reckless to help?/Was it obvious to everybody else?" Those somber lyrics are a perfect fit for a movie that's said to find Bond dropping out of the spy life to follow his heart, only to have his heart broken in return.

No Time to Die finds Bond living a peaceful life in Jamaica with Dr. Madeleine Swann from Spectre. Unfortunately, their idyllic life won't last long. In Entertainment Weekly's January cover star, longtime Bond producer Barbara Broccoli told the outlet, "He decided to go off with her and try to have a normal life. Which, of course, we completely blow a hole through at the beginning of this one. He starts off on a romantic journey with Madeleine and then believes that he's been betrayed by her. Sh*t happens! Everything falls apart."

Since Craig has said that this is his final Bond film, maybe there's hope that the famed spy really will get a happy ending this time. Even if he doesn't, he's got a killer song to end his latest era on.

No Time to Die hits theaters on April 10.

More like this
What Is Mary J. Blige’s Net Worth? The 9-Time Grammy Winner Is Doing “Just Fine”
By Hugh McIntyre
Austin Butler Recalls Lisa Marie Presley Showing Him Elvis’ Bedroom
By Jake Viswanath
You’ll Definitely Recognise Isadóra Bjarkardóttir Barney’s Mum
By Maxine Harrison
James Cameron May Come To Regret His 'Titanic' Door Experiment
By Stephanie Topacio Long
Get Even More From Bustle — Sign Up For The Newsletter
From hair trends to relationship advice, our daily newsletter has everything you need to sound like a person who’s on TikTok, even if you aren’t.