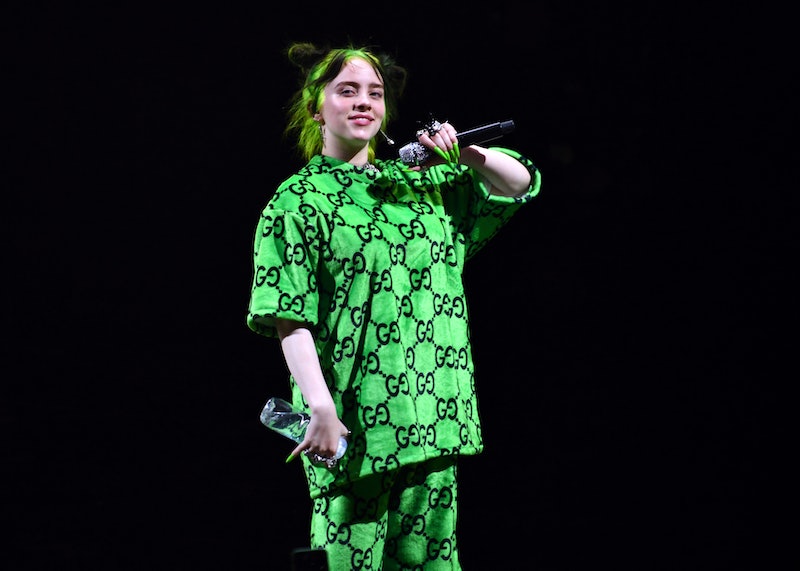 Despite the fact that famous people hardly ever wear the same outfit twice IRL, people are still enamored with the unveiling of magazine covers that can totally transform a celebrity’s “everyday” look. Billie Eilish stars on the cover of V Magazine’s 20 anniversary issue, and looks so unlike herself, you might have to look thrice before realizing that it’s really her.

In honor of its 20 anniversary, V Magazine had posted a few teaser videos to its social accounts before releasing its cover, letting fans take a gander at who might be gracing the celebratory issue. Once the cover was unveiled, fans were exposed to a black and white filtered photo of a darker long-haired Billie Eilish rocking bangs, an ethereal dress-like cape and pants all while posing alongside a bouquet of flowers.

It’s hard to believe this is even the same person who can practically cradle you with her vocal chords. Eilish is known for her casual (yet designer brand) style and her ever-changing hair color. But for an artist who consistently switches up her ‘dos and fits like the weather, Eilish’s entire ensemble on V Magazine’s September issue is one of her most unrecognizable getups fans have seen from the whisper-singer.

Wearing anything that even remotely replicates the look of a dress is very, well, unlike Billie. However, the singer took fans for a spin, showing a softer side to match her voice.

According to the post, Billie didn't actually wear a dress, but a lacy cape, top, and pants all from Gucci. In addition to all her Gucci drip, Eilish also wore a snake-shaped necklace from Bulgari that she donned as a headpiece atop a dark long wig with bangs.

Fans shouldn't get too worried about Eilish changing her style, though. The publisher posted another photo of Billie to its social accounts showing the singer sporting her original oversized street style in Namilla's Vulva Bomber Jacket with a side of creepy wearing a pair of skull sunglasses. Also, peep those lengthy claws on Eilish's hands.

In the cover interview with Pharell, Eilish explains how important authenticity is to her.

"I think sometimes things can start out being real and then [that authenticity] fades away, into dirt," Eilish said. "Hopefully I don’t ever do that."

Earlier in May, Eilish had explained in her #MyCalvins ad campaign that she intentionally wears oversized clothing to prevent others from placing judgement on her body.

"I never want the world to know everything about me," Eilish says in the ad. "I mean, that’s why I wear big, baggy clothes. Nobody can have an opinion because they haven’t seen what’s underneath. Nobody can be like, ‘Oh, she’s slim-thick, she’s not slim-thick, she’s got a flat ass, she’s got a fat ass. No one can say any of that because they don’t know."

Regardless of how Eilish may change her looks for a photoshoot, she intends to stay true to her baggy style. Besides, with fans like hers, they're just waiting to see what cool oversized look she'll pull off next.