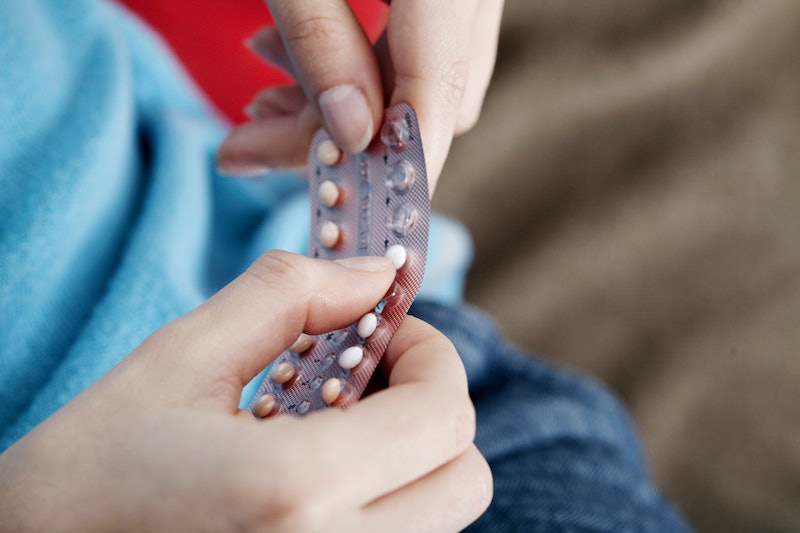 According to a 2018 Bustle Trends Group survey of 226 women ages 18 to 34 of different sexual orientations, when it comes to pregnancy and STI prevention, 57% of women felt like they’re the ones actively involved in preventative measure, while only 39% could report that the sharing of birth control responsibility was equal. But these numbers shouldn’t be surprising. In a culture where those without uteruses are first in line to dictate what those with uteruses should do with their bodies, the topic of who is in charge of birth control in male-female relationships has always been one of controversy and debate.

“Our shared responsibility [for birth control] is me having an IUD and painful periods, and [my partner] Dave coming all over the place,” Alicia, 21, tells Bustle. Getting an IUD "was my decision and I got it before Dave," but she adds that true, egalitarian sharing of birth control responsibilities feels "impossible with the current technologies. When the male [birth control] pill will be widely commercialized and popular, then the sharing of responsibility will be a legitimate question.”

"The fact that so many women bear the responsibility for sexual health is a conundrum," Xanet Pailet, a sex and intimacy coach, tells Bustle. "Part of me feels that it’s related to the patriarchal society that we still live in and the fact that at least with respect to birth control, only women can get pregnant. I strongly suspect that if men could experience abortions and childbirth, we’d be having a completely different conversation. I could also argue that it is our primary responsibility to take care of our own bodies so it make[s] sense that women are more concerned about birth control issues than men."

Although the male birth control pill was declared safe in March 2019, it’s speculated it won’t hit the market for at least another 10 years. But then what? According to a 2017 study by School of Social Sciences and Law at the University of Teesside in Middlesbrough, UK, people with penises are less than enthused about the male birth control pill. While people with uteruses were quite positive about the potential option, the study found that they also had “less trust that men would use the male pill effectively.” The research also found that people with penises who were not in stable, long-term relationships weren’t as interested in using a birth control pill.

Another study, about sterilization in the U.S., found 27% of people with uteruses rely on sterilization for birth control compared to only 9.2% of them relying on their partner’s sterilization. While a vasectomy is a far less complicated and overall easier procedure than a hysterectomy, people with penises still want their partners to accept the brunt of the responsibility, according to the 2008 study. Based on these examples, it might be safe to say that people with penises aren’t as concerned about sharing this responsibility of birth control as they should be.

Dr. Susan Edelman, MD, a board-certified psychiatrist and author of Be Your Own Brand of Sexy, echoes this sentiment. Women wanted control over their fertility and got it — though, depending on your level of reproductive access, the reality of women having that control doesn't mean the same thing everywhere — and so it makes sense that it would be “our primary responsibility,” especially for people having casual sex or short-lived flings.

“When women got the pill, they wanted and got control of their fertility,” Dr. Edelman says. “They had access to abortion, they felt they no longer needed to rely on men, and reproductive clinics were geared toward women, too. Men got the message that they weren't required to be involved. Now, although men know they should be responsible for birth control, they've gotten used to the woman being in charge.”

But while this works for casual relationships, when it comes to serious and long-term relationships where there should be an equal partnership, then it’s another story.

“Why do partners not share the responsibility for birth control? The answer to this question is both straightforward and complex,” Daniel Sher, a registered clinical psychologist and consultant for the Between Us Clinic, tells Bustle. “The simple answer is that this situation is a reflection of the power differential that exists between men and women in society at large. More specifically, we know that the burden of birth control is a big one. As a result, women are expected to take the responsibility and front the expense. They are also expected to put up with a host of inconvenient and unpleasant side effects.”

Expected. As Sher points out, condoms are a safe and effective method of birth control that allows the responsibility to be shared between partners, but as anyone who’s had sex with someone who has a penis will tell you, they're not big fans of condoms.

“Shared?” Jennifer, 37, asks. “It’s more like he asks if I’ve taken my pill before he comes inside me. I don’t think that counts as a shared responsibility. I’m on the Pill specifically so we don’t have to use condoms.”

Which brings up an entirely different and more aggravating conversation: some partners value their sexual pleasure over the potential side effects that come with birth control use by their partners. But not all them.

“When my partner of 6.5 years and I were first together, we used condoms for birth control and for STI protection,” Emma, 32, says. When Emma and her partner were using condoms, it was her partner's responsibility to buy them and make sure they were always in the apartment. But these days, the couple uses condoms rarely, mostly relying on a family planning method and a diaphragm.

"I track my cycle pretty closely, so I know when I'm definitely not fertile and when we have sex during the fertile periods, I just put the diaphragm in," Emma says. "So, currently, I guess you'd say that I'm 100% responsible for our birth control. But historically, I'd say it's been pretty even.”

Sher points out that in this day and age where reproductive health and autonomy are under attack, it’s imperative that men get more involved. “Men [need] to start playing their part by accepting a greater degree of responsibility for birth control,” Sher says.

We can start turning the table in this regard if we talk to our partners about birth control use and explicitly say that we wanted them involved, if that’s the case. Some people with uteruses prefer to handle the whole thing themselves. As for people with penises, they can step up to their plate on their own after considering what it means for their partner to be the only person in the relationship worrying about birth control.

“At this point, the practical means by which men can take a greater degree of control are somewhat restricted,” Sher says. “However, I believe that the process should begin with a) men practicing some self-reflection in a non-defensive way so that they can begin to comprehend the power differential that exists and why this places an extra burden on women; and b) initiating an open conversation with their partners so that the couple can communicate about these responsibilities and create space for the responsibility to be shared a little bit more equally.”

If people with penises don’t want to want use condoms, that’s their issue, but one partner doesn't get to subtract themselves from the entire birth control equation. While the issue is complicated and is likely to remain so, if it takes two tango, as they say, it should take two to be involved in birth control.

More like this
The 19 Best Tweets & Memes About Bisexual Awareness Week
By Lexi Inks
Are Quality Time & Gift-Receiving Love Languages Compatible?
By Lexi Inks
Breeding Kinks Have Been On The Rise Since Roe V. Wade Got Overturned
By Lexi Inks
Women Around The World Are Cutting Their Hair In Solidarity With Mahsa Amini
By Darshita Goyal
Get Even More From Bustle — Sign Up For The Newsletter