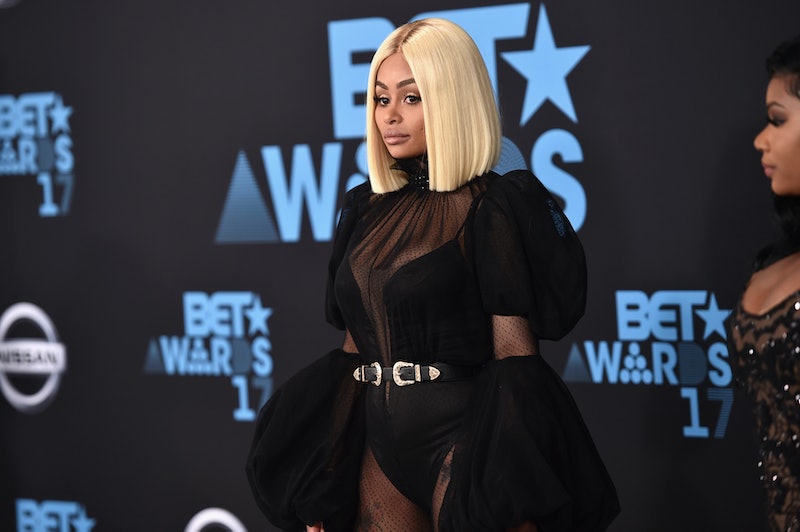 Any new developments in Blac Chyna and Rob Kardashian's relationship have been under the radar for some time — at least until Blac Chyna posted disturbing Snapchats on Wednesday claiming Kardashian allegedly abused her. At the same time, he's making claims on his own Instagram while bringing their daughter Dream into the mix. Bustle has reached out to representatives of both for comment, but did not receive an immediate response.

EARLIER: On Wednesday morning, Kardashian went on an Instagram rampage against Chyna, putting up a series of graphic posts including a video of that appeared to be of Chyna reportedly with another man and since-deleted nude photos of her that he claimed that she sent him. In the posts, Kardashian accuses her of being unfaithful, of heavy drug use, of having Dream out of spite for Tyga, and of using him for money. In one post, he says, “Chyna I hope U find help.” Kardashian also put up screenshots of texts from men he claimed that Chyna was with, asking him for money.

But Chyna’s Snapchat posts suggest even more, very serious issues between the two, who were engaged in April 2016 and reportedly broke up in February 2017 after an on-again-off-again relationship. While the Snapchats don’t directly address Kardashian’s Instagram posts, they bring a whole new claim to the table, alleging Kardashian put a hand on her and “beat” her:

Over the weekend, Chyna reportedly put up a since-deleted post saying, “Single. I'm happy,” and made a public debut at the BET Awards without Kardashian. The two welcomed their daughter Dream in November 2016, and Kardashian posted about Chyna on Mother’s Day, saying, “happy mama's day to the mother of my only child… I am so Thankful for our beautiful baby girl and so Thankful for YOU and never thought I could be this Happy so thank you for giving me Her.”

It seems this won’t be the last audiences will hear about the current situation between Chyna and Kardashian. This isn’t just a PR debacle the Kardashian family has to scramble to solve; it seems like help is truly needed here in some way or form, so all involved can move forward in a safe way.

More like this
Amanda Gorman Shared A Powerful Message On Meghan Markle’s Penultimate Podcast
By Darshita Goyal
Kim Kardashian & Tristan Thompson Had An "Inspiring" Thanksgiving Celebration
By Brad Witter
Kim K Is Putting Kanye’s Memorabilia — Like Grammys & Clothes — In A Vault
By Jake Viswanath
In Their Divorce Settlement, Here's What Kanye Reportedly Must Pay Kim K & Kids
By Radhika Menon
Get Even More From Bustle — Sign Up For The Newsletter