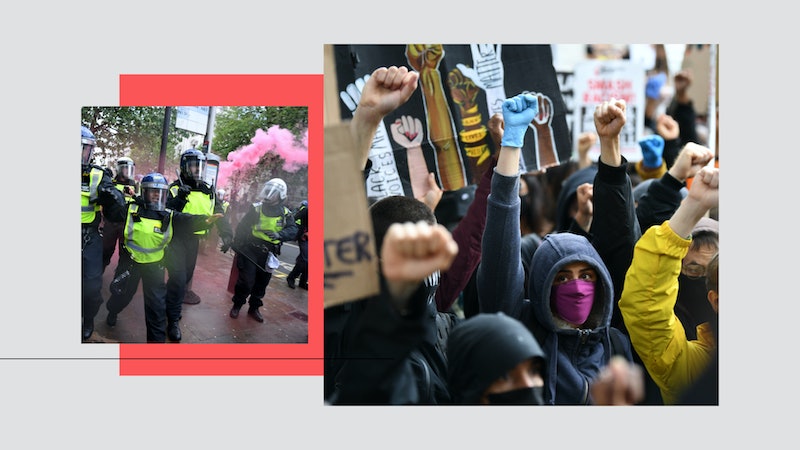 The past couple of weeks have seen protests throughout the UK, in support of the Black Lives Matter movement. From London to Edinburgh, Manchester to Southampton, protestors have taken to the streets to march in demonstrations across the country, which look set to continue. For those thinking of attending a march, we’ve listed the possible scenarios you might come up against, what to do in each case, and how to peacefully assert your right to protest.

Far-right groups have responded aggressively to BLM protests, as we saw last weekend, condemned by the police as “mindless hooliganism” and “utterly shocking violence”, per The Guardian. The far-right protests that took place on June 13 and 14 saw 23 police officers injured, and 113 arrests made. Meanwhile, peaceful Black Lives Matter protesters were seen helping those caught up in the far-right violence, regardless of race.

While chair of the Police Federation for England and Wales, John Apter, has called on Priti Patel to ban protests during the COVID-19 pandemic – “I urge the home secretary to be unequivocal in her terms that whilst we are under the threat of this virus, any large gathering or protest must be banned,” he said, as reported by The Guardian – currently, no such action has been taken. So, if you’re continuing to march in support of Black Lives Matter, here’s some guidance on what to be prepared for.

What To Do If You’re Kettled At A Protest

Often at protests or large gatherings, the police (sometimes in riot gear, or protective clothing) will line up to surround a group of demonstrators, gradually tightening the space between them, to confine them to a certain area. This is known as “kettling”.

If you see the warning signs of a kettle – police forming a line by protestors, or standing shoulder to shoulder – try to seek out a legal observer (trained volunteers, wearing marked high vis vests, who support the legal rights of demonstrators), who should be able to advise you on what to do. Black Protest Legal Support, a hub of over 200 lawyers and legal advisors offering free legal advice and representation to UK Black Lives Matter activists and protesters, say you should avoid drawing attention to the process – do not shout “kettle”, for example – as this could accelerate police response.

As per Black Protest Legal Support, if you are held in a kettle you usually do not have to give police your name, address or date of birth. The police only have the power to take your name and address without arresting you under the Section 50 Police Reform Act, if they have reason to believe you have been acting in an “antisocial manner”. It’s important to note that this is not a blanket power, and the police have to apply the Section 50 test to each individual present, it cannot be applied to a group. If you feel safe to do so, ask the police “under what power” they are asking you for your details, and if relevant, what you as an individual have done that constitutes anti-social behaviour. Make a record of the police response if possible. For more information, the Network for Police Monitoring (NetPol) has a guide to police powers under Section 50, and a helpful guide to kettling, too.

What Could Affect Your Right To Protest

As per Black Protest Legal Support: “The right to protest is protected under Articles 10 and 11 of the European Convention on Human Rights (ECHR).” The two articles work together to address the legal right to protest; Article 10 protects freedom of expression, and Article 11 protects freedom of assembly and association. Both these rights are qualified, which means that they are not absolute. Therefore public authorities, such as the police, can take proportionate steps to intervene if deemed necessary to protect public health and safety.

The coronavirus pandemic will, of course, make an impact on protests, too. Under current regulations in England, gatherings of more than six people from different households are banned, with different rules in Wales, Scotland, and Northern Ireland. These regulations can be enforced by the police in the UK by issuing fixed penalty notices and even arresting and charging you with an offence. This could interrupt your ability to protest, so make sure that if you are attending a march, you wear a mask and practise social distancing where possible.

What To Do If A Protest Becomes Violent

While the Black Lives Matter protests have been largely peaceful, any large demonstration with police presence has the potential to turn violent. Article 10 and 11 of the ECHR do not protect the rights to violent protests, so the likelihood of police involvement is much higher once violence or illegal behaviour (destruction of property etc.) takes place.

Before heading to a protest, make sure to organise a plan of action with your friends, and research civil and human rights groups that could help you if the need arises. Write important numbers and information down on a piece of paper, including an alternative way to return home if your options become limited. If things get out of hand, follow your pre-agreed plan. “Do things systematically: deal with the situation, get to a safe place – leave calmly, and check in with your safety network,” says Right To Protest’s comprehensive guide to staying safe at a protest.

If the authorities are using excessive force, try to (safely) collect as much relevant information as possible. As per Right to Protest, “try to protect the privacy of the victim, but aim to gather detailed information about the attacker (i.e. appearance, name tag, rank), the time and location, and the incident.”

In particular, be careful around police horses and dogs. As seen at the BLM protests in London, when a police horse bolted its rider, animals can be unpredictable if protests become violent.

What To Do If You Become Injured At A Protest

Whilst most protesters will stay injury free throughout, demonstrations can be a perfect storm for cuts and bruises, plus sunburn, heat exhaustion or hypothermia (depending on the weather). The key to avoid most protest-related health issues, is to be prepared: wear appropriate clothing, stay hydrated, carry snacks such as energy bars, a small first aid kit, and any medicine you take regularly (such as inhalers) with you. Always keep any relevant information about ongoing medical conditions on your person, too.

While the use of CS spray is seen less frequently in the UK, compared to the US, police are trained to use it, as well as tasers and batons, “when they feel that the offender poses a risk to themselves and/or the police officers and others in the vicinity”. So, it’s good to read up on what to do if tear gas and pepper spray are deployed. Move away from the area, preferably upwind, breathe slowly (no deep breaths) and if you have been sprayed, avoid touching the skin or eyes and rinse as soon as possible with lots of water.

If you are taken ill, make those around you aware of how you are feeling and always seek medical help from a professional as soon as possible.

What To Do If You Are Stopped, Approached, Fined Or Arrested By Police

Research your rights ahead of the protest. Some police officers rely on the fact that the public won’t know their rights, so it's important to be able to ask the right questions. Legal campaigners suggest carrying “bust cards” – with key advice, and the names and numbers of solicitors who can help you – on your person at all times. Green & Black Cross (GBC) have a number of downloadable bust cards, which are relevant to different areas in the UK; and recommend writing their protest support line number on your arm in marker pen, 07946 541 511.

According to GBC, the key points to remember are as follows:

More like this
Eurovision Has Been Given A Whole New Look Ahead Of Its Liverpool Debut
By Bustle UK
This Is When Netflix Is Going To Start Charging You For Sharing Passwords
By Darshita Goyal
Savannah Guthrie Got Her First-Ever Tattoo With This Former Wild Child
By Suzanne Zuckerman
Gen Z Are Twice As Likely To Identify As Queer, According To New Data
By Sam Ramsden
Get The Very Best Of Bustle/UK
Sign up for Bustle UK's twice-weekly newsletter, featuring the latest must-watch TV, moving personal stories, and expert advice on the hottest viral buys.