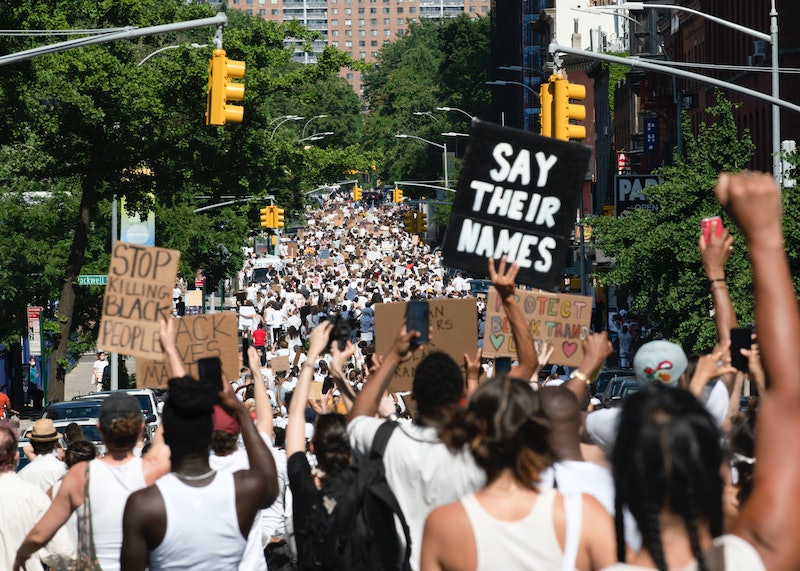 Thousands of people took to the streets of Brooklyn on Sunday to raise awareness about the alarming number of deaths within the Black trans community. Just last week, two Black trans women were murdered: Riah Milton in Liberty Township, Ohio, and Dominique “Rem’mie” Fells in Philadelphia. Counting Milton and Fells, 14 reported murders of trans and gender non-conforming people have occurred since January 2020, according to the Human Rights Campaign. And countless others go unreported or they are dead-named by media, authorities and/or family members.

At the march, officially called “Brooklyn Liberation: An Action for Black Trans Lives,” event organizers asked attendees to wear white and march silently for the beginning of the protest.

Wearing white was an intentional nod to Black history, specifically to the 1917 Silent Parade, a silent march of about 10,000 Black people along Fifth Avenue starting at 57th Street in New York City. According to the NAACP, it was “the first protest of its kind in New York, and the second instance of African Americans publicly demonstrating for civil rights.”

That protest followed a rise in racial tension across the country during the summer of 1917. In East St. Louis, white residents had launched a bloody attack on the growing Black community in the area. They killed many Black residents, and thousands more were faced with homelessness after white residents burned down their neighborhoods.

“In the 1917 Silent Parade, the men wore black while women and children wore white,” West Dakota, a co-organizer of Sunday’s event, explained in a statement. “The decision to wear white was to symbolize our unity, and also to take a stand against corporate appropriation of the rainbow flag. We don’t need rainbow [merchandise] to show our pride.”

Pinkwashing — otherwise known as marketing and branding strategies aimed at promoting friendliness and acceptance toward the LGBTQ+ community without much substantive action — has become rampant in recent years, especially following the U.S. Supreme Court decision that legalized gay marriage in June 2015. Many companies are eager to showcase their allyship via rainbow-printed swag, but aren’t actually implementing tolerant and inclusive business practices.

“This collective of folks is particularly powerful because it’s modeling what is possible when you do have allies and folks who do care and also want to make sure that they’re building something that speaks to the hearts of the actual people that they’re representing,” Raquel Willis, a Black transgender activist and one of the event co-organizers, told CNN. “So often, that doesn’t happen.”

More like this
15% Pledge Director LaToya Williams-Belfort On The Impact Of Supporting Black Business
By Dominique Norman
Berriez Founder Emma Zack On Her Size Inclusive NYFW Show
By Dominique Norman
These Are The Best Socks A Woman Can Buy
By Lisa Fogarty
How To Wear A Bucket Hat Like Rihanna, Dua Lipa, & More
By Allie Fasanella
Get Even More From Bustle — Sign Up For The Newsletter