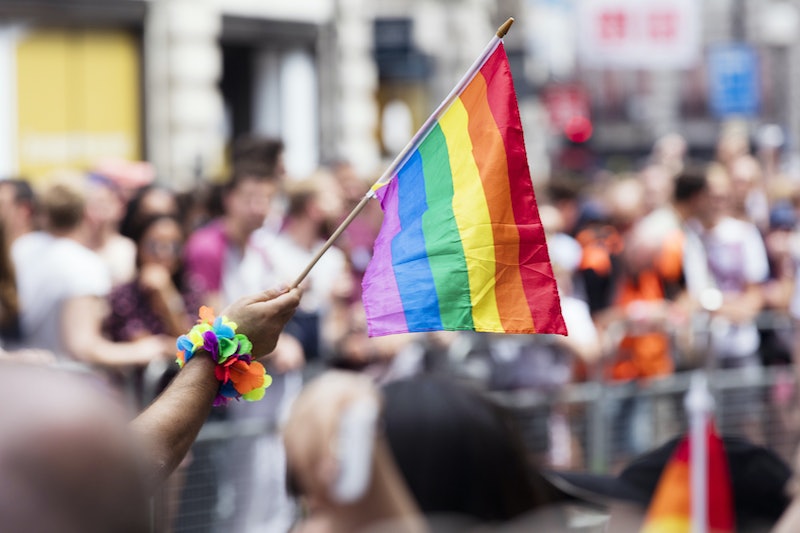 Pride month is upon us: A month-long celebration of the LGBTQ community. If you're committed to good allyship, you may wonder how to participate in Pride without making it about you.

Straight, cis folks have to put in work to decenter themselves at Pride. This mostly comes down to policing your own identity in the space, so that others don't have to, since that can result in queer-identified but straight-passing folks feeling unwelcome in their own community. In other words, be mindful of where you are, who the space is intended for, and how you can best support that group, even if it disrupts your good time.

You can also do the work of looking out for marginalized people in our own communities. Are you supporting organizations that are accessible to low-income queers, who are disproportionately black, brown, and trans? Are you choosing accessible means for your own parties to be inclusive of disabled queers who may wish to virtually attend? Are you carving out time to do community outreach with queer sex workers, queer homeless youth, or incarcerated queers — as well as celebrating this month?

Even though Pride is a celebration, it's important to keep these things in mind and make more space. Here are a few ways for everyone to celebrate harmoniously this Pride.

1. Know Your History (And Your Herstory, Too)

There's a reason all your queer friends keep posting "The first Pride was a riot." It's because a shocking number of people who celebrate Pride don't know its history. Pride commemorates the 1969 uprising at the Stonewall Inn, a gay bar in Greenwich Village, New York, which, like most gay bars of the era, was subjected to constant raids, frequently resulting in the brutal beating and rape of queer folks at the hands of police.

Stonewall marks a moment in history when queers, led by black trans women, fought back against police violence and successfully chased off a hateful, oppressive police force, inspiring a literal and figurative movement toward queer liberation. It was spontaneous. It was violent. And it was a riot.

In other words, corporations who drape their signage with rainbows during the month of June did not invent Pride. Queer people did, and their contributions (and continuing struggles) are frequently overlooked.

Pride doesn't exist without the tireless work of activists who continue doing the work of queer liberation, which is very, very far from over. Celebrating Pride while remaining ignorant to their contributions — or worse, judgmental of their necessary tactics to disrupt the status quo — is straight up disrespectful.

Similarly, bringing an "I don't see gender, I see people" attitude to Pride, especially for cisgender, pansexual, or heteroflexible folks, can be just as invalidating of the queer experience as claiming "I don't see race." It's not that being sexually fluid isn't a valid way to move through the world; it is! But it's important to recognize and respect that queer bodies carry the death and trauma of queer identities. Claiming that we're post-gender or post-sexual identity ignores the realities of a queer communal history of trauma.

2. Don't Take Up Space At The Expense Of A Marginalized Person

Whether you live in a big city or a small town, Pride celebrations can be overflowing with attendees — even virtual ones. If you're a straight, cisgender person at a party that's filled to capacity and others are being excluded, you can be a good ally in a very simple way: leave! Give your space to a queer person!

In social justice spaces, we often talk about how privileged people need to be more mindful of how they "take up space," centering their own experience instead of listening to marginalized people. This is the literal, physical version of that.

If suspect your attendance will result in others being sent away, consider finding something else to do. Straight people can party safely anywhere, so let queer people enjoy the spaces they've carved out for themselves this weekend.

Similarly, if you're a white queer and you spot an advertised QTPOC (queer/trans people of color) party, skip it unless explicitly invited. You won't wan to force organizers to police identities at the door.

3. Pay More Than The Suggested Entry Price If You Can

Many events outside of Pride that are organized by and for queer folks have a sliding scale entry fee to accommodate how financial barriers affect people differently based on their intersectional identities. It's very common, for example, to see cover charges that ask white attendees to pay more, with a reduced rate for people of color in attendance.

It's a simple, caring model to make queer events — including virtual ones — more accessible to people who face structural economic barriers outside their control, while asking a little bit more from people who benefit from their equally arbitrary privileges.

That's why, if you are attending a Pride event — especially one put on by queer organizers, rather than a corporate sponsor — and you don't see a pricing breakdown that includes higher fees for straight folks in attendance, you might consider paying more and calling it a donation. This will help offset the cost many organizers incur by opening the doors to those who can't afford the cover fee.

4. Don't Complain About Being Straight-Passing

If you're queer-identified but in a straight-passing relationship, or queer-identified but constantly get mistaken for straight in queer spaces, remember that no one can make you feel inadequate. And that means taking care with how you react in certain situations, including what you post online. You might not want to share a rant about being misunderstood this week, since that can come off as insensitive.

On a related note, there's a massive contingent of queer folks on social media who have taken on the challenge of calling in members of their own community, and ttttgently reminding them not to police queerness or gate-keep queer identity at Pride. Do your part, too, by respecting the struggle of those who can't share in the privilege of a straight-passing relationship.

If you're a queer person at Pride, don't align the bisexual woman holding her husband's hand with the girl from high school who dumped you for a boy because you think she was "just experimenting." Yes, it can be tough to move past hurtful memories. But Pride is about celebrating, not dragging others or making assumptions. Plus, everyone is on their own path and deserves to be seen as requested. Affirm people where they're at, and be accountable for yourself.

6. Embrace Diversity — Even In Consent Practices

Thanks to the hard work of the #MeToo movement, many people are becoming more mindful during their sexual encounters, and are sharpening their consent skills. Pride can feel like the perfect place to trot out your newfound knowledge and practice in the field.

But consider this: consent isn't just about securing permission for every single act you want to perform; it's also about discovering what types of consent people prefer. And different queer communities — say cis gay male spaces versus queer women's spaces — have differing cultures of consent, and paying attention to that is key.

Some people prefer flirtatious or erotically-charged encounters to unfold organically, so consider asking at the outset of the encounter, "How do you like to practice consent?" Celebrating queerness is all about celebrating diversity without judgement — expand that idea to include diversity in types of consent.

Ultimately, decentering yourself at Pride is all about striking a balance between taking personal accountability and making room for others with humility, grace, kindness, and generosity. When in doubt, just ask how you can support them.

More like this
Gen Z Are Twice As Likely To Identify As Queer, According To New Data
By Sam Ramsden
What The UK Blocking Scotland’s Gender Recognition Bill Means
By Sam Ramsden
The UK Government Is *Finally* Banning Conversion Therapy
By Sophie McEvoy
Adam Lambert Called Out The George Michael Biopic Over Potential Casting
By Sam Ramsden
Get Even More From Bustle — Sign Up For The Newsletter
From hair trends to relationship advice, our daily newsletter has everything you need to sound like a person who’s on TikTok, even if you aren’t.

This article was originally published on June 23, 2018