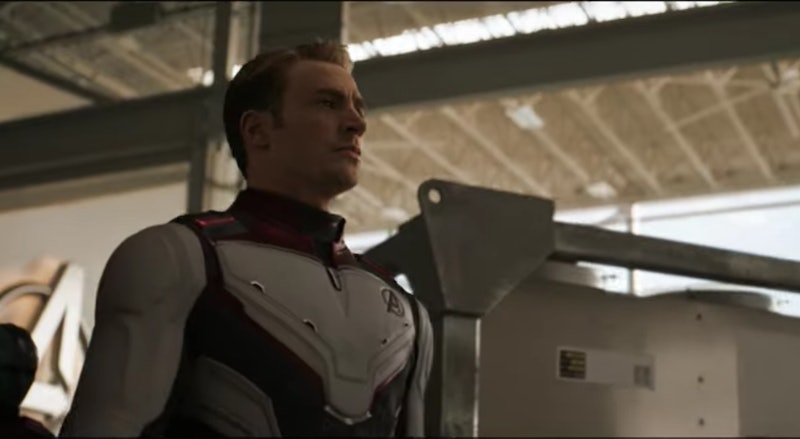 With a snap of Thanos' fingers he threw his gauntlet down, but now the Avengers have their own accessory that could undo the destruction he brought to Earth. The new Avengers' suits in the Endgame trailer could be a serious clue on how they're going to defeat Thanos. In fact, some fans are convinced that Avengers: Edngame will include a trip to the Quantum Realm, a place that is very familiar to Ant-Man.

"Whatever it takes," Iron Man, still stuck in space, says in the final moments of the new Endgame trailer. And what it takes might just be a new suit with some magical capabilities fans have never seen before. At the one minute and 52 second mark, the post-Thanos snap Avengers — Captain America, Ant-Man, Hawkeye, Black Widow, Nebula, War Machine, and yes, a now Earth-bound Iron Man — are seen strutting their stuff in new red and white suits.

Compared to Cap's usual gear, these suits are a lot more high-tech. The theory is that they actually allow the heroes to enter the Quantum Realm, which is a dimension that can only be invaded by magical energy or a Sling Ring, which helped Doctor Strange get there. It's also a dimension that has been reached by Ant-Man with help from Doctor Hank Pym's shrinking technology. So, yes, Ant-Man has an important role to play in Endgame and he will look good while doing it.

So, how does the Quantum Realm work? The area, which was first introduced four years ago in Ant-Man — and is referred to as the "Microverse" in the comics — is technically another alternate dimension in the multiverse that can be reached by magic, yes, but also through science. That's how Scott Lang, a.k.a. Ant-Man ends up there. And, presumably, that's how the other Avengers will get there too.

After shrinking one too many times, Scott got stuck there in last year's Ant-Man & The Wasp. (It's also where the original Wasp, Janet van Dyne (Michelle Pfeiffer) had been stuck for decades, FYI.) Scott clearly managed to escape, but in the Quantum Realm the rules of space and time do not apply, which should come in handy when trying to take down Thanos and bring back half of Earth's population. It might be the on way to counter to those time and space controlling Infinity Stones of his.

Knowing all of this, those suits, which look very similar to one Hank Pym once wore, as Tom Butler, the editor of Yahoo Movies UK pointed out on Twitter, are a sign that these Avengers are going to the great beyond. Not to mention that Ant-Man could be the MVP of Endgame since he has knowledge no one else in this superhero supergroup has. You know, like how to escape the Quantum Realm and live to talk about it. Back in December, Verge went as far to declare Ant-Man was "the one superhero to save them all."

So, what about Captain Marvel, who pops us in the Endgame trailer, you ask? Isn't she the strongest Avenger and the key to defeating Thanos? Well, yes, but fans think the fact that Captain Marvel and Thor are nowhere to be found in the shot featuring the new suits means there is more than one mission taking place.

Let's be honest, Thanos doesn't seem like a one-mission kind of villain. It's not going to be easy to defeat him and they're gonna need all the plans they can come up with. For now, it seems at least one of them will include a small dimension that could hold a big surprise for that lavender monster.