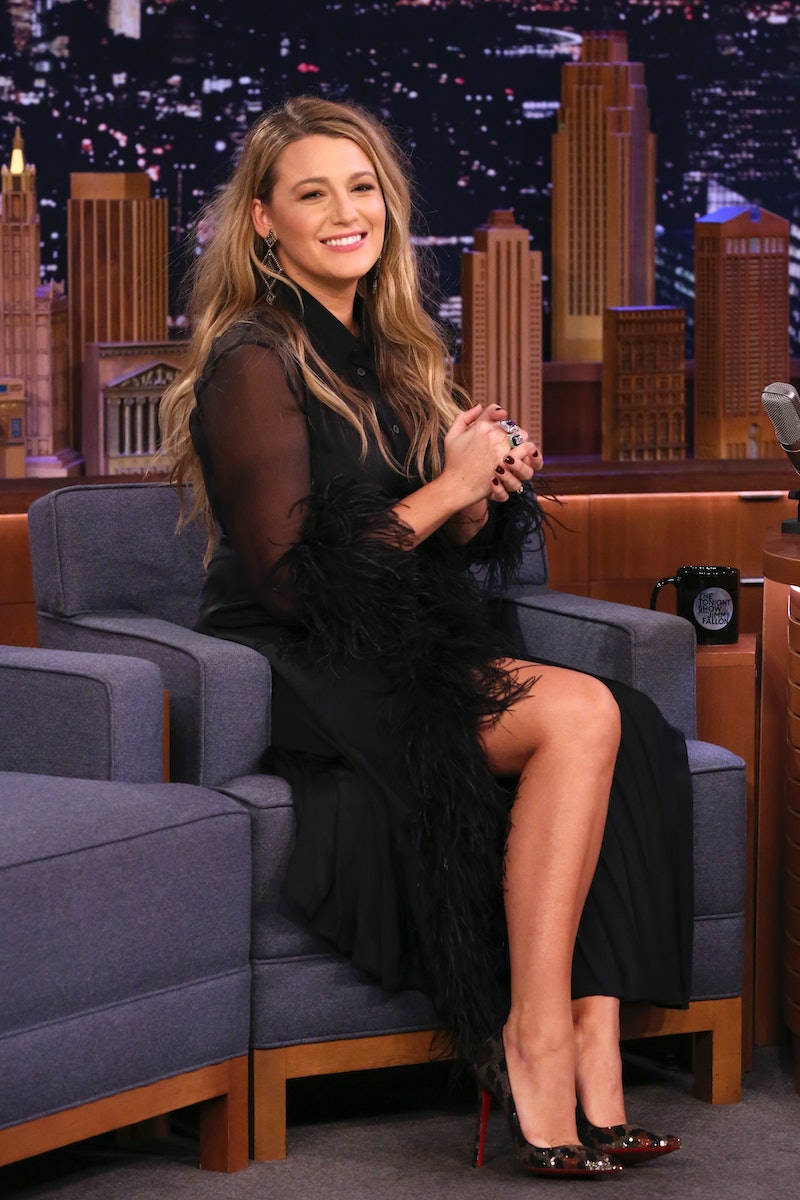 Blake Lively wants everyone to know that she didn't wake up like this — and that it also took a lot of work in order to appear run-down onscreen. During a recent appearance on The Tonight Show Starring Jimmy Fallon, Blake Lively said the reaction to her Rhythm Section transformation was "offensive" — to both her feminist sensibilities and her vanity. After host Jimmy Fallon showed off a photo of Lively's onscreen transformation, the actor joked about the headlines that appeared after she posted about it on Instagram.

"[Makeup artist] Vivian Baker did this really rough look, because my family has experienced a lot of tragedy ... but when I posted it, people were saying 'Wow, Blake bravely shows what she looks like before and after makeup,'" Lively said with a laugh, admitting that some people actually "think that's what I look like without makeup, which I find very offensive because that takes an hour for her to make me look like that." Pointing at the "after" part of the photo, where her character was in better shape (see: no under-eye bags or bruises), she also revealed that it "also takes an hour to make me look this good."

All in all, the reaction to her post — and the various paparazzi photos that showed her in character, looking decidedly un-glamorous — left Lively very conflicted. "I'm sort of vacillating between my vanity, which is wanting to be like, 'I don't actually look like that!'" she revealed. "But also being a feminist and [asking], 'Why do we expect women to wake up looking like this?' ... But I would like people to believe that I wake up looking this beautiful."

Lively has always had a sense of humor about the amount of effort that goes into being red-carpet ready at all times, often captioning her photos with the hashtag "#IDidNotWakeUpLikeThis." At the premiere of The Rhythm Section, Lively told People that she was wearing a corset under her gown, in order to look her best after giving birth to her third child in October of 2019. "Corsets make you feel like you’re on the brink of having it together," she said, of her red carpet style secret before adding, "but, you know, this is not real life. I gotta get this thing off!"

While the reaction to her transformation may have left the actor conflicted, it's far from the only makeover that Lively undergoes in The Rhythm Section. The action film centers on her character, Stephanie, who spirals into depression and addiction after her entire family tragically dies in a plane crash. However, after she discovers that the tragedy wasn't an accident — but was, in fact, a terrorist attack that the government attempted to conceal — Stephanie embarks on a quest for revenge that takes her across Europe. And, based on the trailer, such a mission requires many, many disguises.

"When she goes for something, she goes big, whether that’s her rise or her fall," Lively told Bustle about her character back in September. "When a person like that has nothing to lose, she is capable of anything. That is her superpower."

For Lively, part of the appeal of The Rhythm Section was the chance to shed her normally glamorous image and embrace Stephanie's vulnerabilities. "She responds like any person would," Lively said. "She’s scared sh*tless but fights for her life. She doesn’t have real training or expertise but she has the primal power of the human will."

Sure, Lively might not look like Stephanie in her day-to-day life, but the actor is willing to undergo whatever transformation is required in order to bring characters to life onscreen — and to look glamorous on the red carpet.