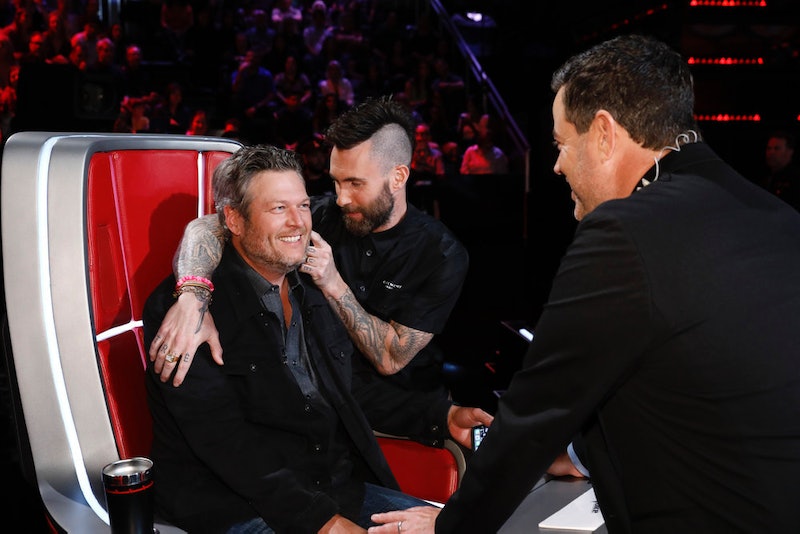 All good things must come to an end, but for one country artist, it's just becoming too much to bear. Blake Shelton can't imagine The Voice without Adam Levine, his co-judge for the past 16 seasons on the singing competition show. Levine and Shelton's banter and competition for artists is legendary, but no matter their on-air squabbles, the love between the two is always there. And with Levine leaving The Voice, the last two original judges on the show have been reduced to just one.

While speaking with Entertainment Tonight at the Backlot BBQ with Blake Shelton, an event for IHG Rewards Club Chase Mastercard cardholders on June 21, Shelton got pretty candid about filming the show without Levine. "I can't imagine, honestly, what the show is gonna feel like at first without Adam there," he said. "I mean, we're about to start filming the seventeenth season of the show, and Adam has been my frenemy from day one, you know, down there on the end."

The Voice premiered back in 2011, with original judges Shelton, Levine, Cee Lo Green, and Christina Aguilera. And while it looked like Shelton and Levine would be sitting in those revolving chairs until the very end, it sounds like the Country singer wasn't actually entirely surprised by Levine's choice to leave the show. "I think we all knew, on the inside of the show, that he was ready to make a move. For a guy like Adam, who is just — he's the most ADD person I think I've met — for him to have even done it as long as he did without wanting to move on to the next thing, is amazing," he told ET.

And, of course, he added, it doesn't hurt that the coach taking the Maroon 5 frontman's place is none other than Gwen Stefani. "But I know he's happy with his decision. Doesn't mean I am, or any of us [are happy], but at least they were able to soften the blow a little bit and bring Gwen back."

Shelton and Gwen Stefani have been dating since 2015 after meeting as coaches on The Voice, so having another close counterpart join the show is going to make the transition easier for the country singer. But he was still ruminating on the loss of such a soul on the show. Almost forgetting about Stefani for a second, even. "Without Adam there, it was — I don't know, I knew it was gonna be hard for me. We just have that thing that's just so comfortable," he said, before adding, "Gwen and I click too."

They may be dating, but Shelton had nothing to do with her booking the gig as coach this coming season. In fact, it all happened without his knowledge. "By the time I found out what was going on, which was only about 12 hours before the announcement, they had already reached out to Gwen's camp and said, 'Look, Adam's decided he's gonna move on, we're ready for Gwen if she's in,'" Shelton revealed. "I'm like, trying to get in the middle of this, literally, I got on the phone with one of the NBC executives, and I was saying, 'Hey man, if Adam's gonna do this, we have got to—' and before I could even finish my sentence, she said, 'Blake, it's done. What are you doing?' And I went, 'Oh, OK. Perfect.'"

Everyone will have to get used to a brand new dynamic on The Voice Season 17, but with Stefani there, not to mention fellow coaches John Legend and Kelly Clarkson, it sounds like Shelton is in good hands.