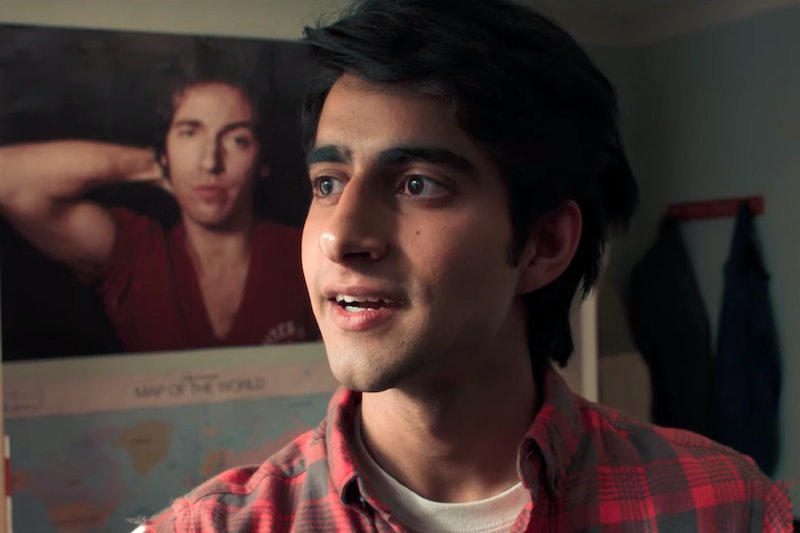 Coming to theaters Aug. 16, the feel-good coming-of-age film Blinded by the Light is bolstered by the music of the only Boss this gal listens to: Bruce Springsteen. Set in 1987, Blinded follows Pakistani Muslim teen Javed (Viveik Kalra) as he copes with problems at school and at home in Luton, England by listening to Jersey's denim-clad finest. Based loosely on the life of journalist Sarfraz Manzoor, Blinded By The Light is a true story where the details and emotions are real, but the person is fictional.

Blinded's script was co-written by Manzoor (with Paul Mayeda Berges and director Gurinder Chadha — Springsteen gets a credit too, for his words and music) and based in part on his 2007 personal memoir Greetings From Bury Park. In the book, Manzoor weaves together what it was like growing up Pakistani and Muslim; working in media as the same after 9/11 and England's 7/7 train bombings; and to lose his father at 24, just before his career blossomed. Throughout it all, he's also driven by his obsessive love of Springsteen.

Blinded By The Light takes elements from Manzoor's life, particularly his teen years, and shapes them to focus on Javed, an original character. In a Guardian interview, Manzoor describes it as "a rites of passage comedy drama ... it revisits my teenage years and much of it is directly based on real events," adding that "much of the rest of the film was shot in Luton, sometimes using locations that featured in our real lives."

Javed copes with racism in Margaret Thacher's England and a strict home life run by his traditional father by writing poetry. When a classmate hips him to Springsteen's songs, Javed's surprised to find plenty to relate to in his tales of working class struggle and overcoming personal malaise. Though he's kept his poetry under wraps, as he gains confidence through The Boss's music, Javed begins finding his own voice as an artist.

In The Telegraph, talking about this point in his own life, Manzoor noted, "My own future prospects were not promising: kids from my background — working class, comprehensively educated, Asian — weren’t visible in the popular culture and the assumption was that after an education, I would settle into a solid, unexciting job and eventually marry a solid, unexciting woman. I aspired to more but the life I dreamt about seemed impossibly out of reach." That is, until Bruce came into the picture. "Unlike Morrissey — whose very English rendering of alienation appeared arch and whining — Springsteen was always able to find some hope amid the desolation. There was always, to quote the title of one song, a reason to believe," he continued.

Manzoor prospered, but according to his BBC biography, bending to his family's wishes he went on to study Economics and Politics in college. Following that "he spent two years languishing in soul-destroying office work, where he managed to get himself sacked on an impressively regular basis," before finally going for a Master's degree in Film. Soon after he began working at Independent Television News, where his career as a documentarian and interviewer blossomed. Speaking to Newsline Magazine, Manzoor talked about his father's intentional decision to send him to a mostly white school. Asked if it gave him a better education, Manzoor responded, "I benefited hugely from going to a mostly white school as it forced me to learn how to interact with the white majority rather than retreat into a familiar subculture."

Similarly, Javed slowly comes out of his own head. His strong feelings about Springsteen help him realize music can be one bridge to reach other people across culture and time. His poetry, if he can work up the courage to share it, could do the same. Blinded by the Light conveys the hope and optimism Springsteen brought to Manzoor in real life through his fictional counterpart, but the emotions and inspiration seen on screen are real life blown up to the Boss's own proportions.