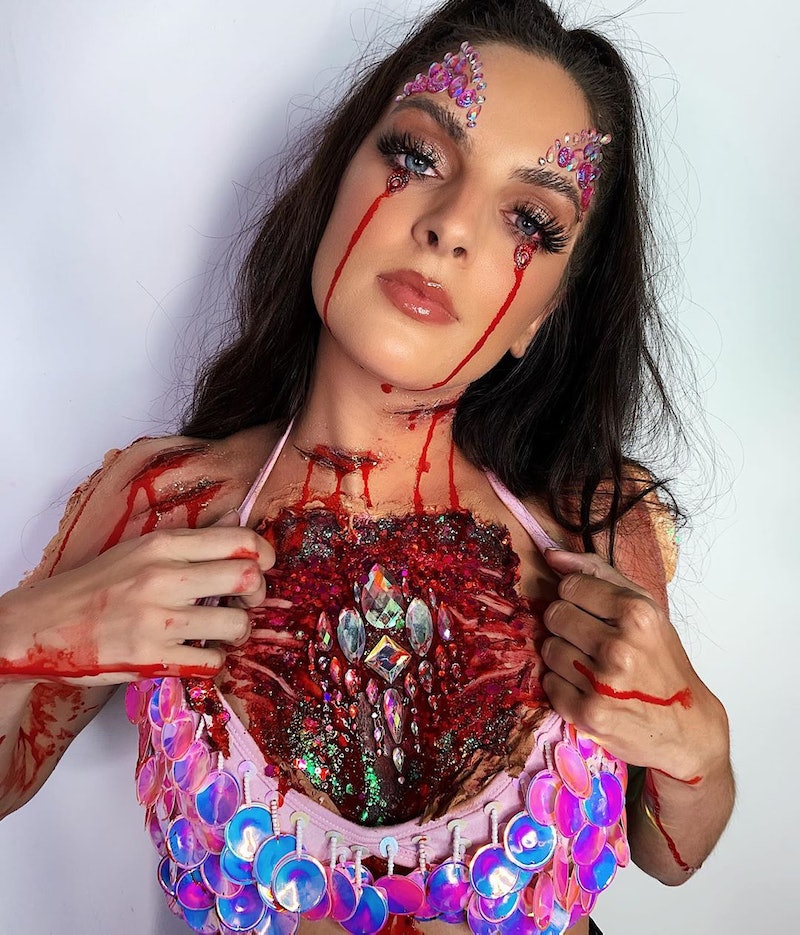 Spooky season is here, and things are about to get a little weird. You may have expected to see some Coachella-inspired Halloween costumes, but you probably didn't expect a glitter-meets-gore combo. That, however, is what Shrine's bloody festival Halloween costumes have done. Editorial Note: Shrine was previously know as The Gypsy Shrine but has since changed its name. Bustle does not support the use of the word "gypsy."

Shrine may sound familiar to you thanks to the brand's position as one of the pioneers of the glitter boob festival trend. Yes, that's a thing. Founder Jenna Meek helped skyrocket the NSFW look, and even more sparkly body parts have emerged including glitter butts which made the rounds on social media last year. While outdoor summer music festivals are over for 2019, Shrine is making sure that festival style is not. They're simply doing it with a twist.

Shrine has taken its signature body jewels and melded them with new products such as scar tattoos and fake blood to create festival nightmares. In the looks that the brand has posted online, models are shown with ripped open butts with glitter (and blood, of course) underneath, exposed breasts filled with rhinestones, and even torn apart chests full of jewels. The result is a thoroughly confusing mix of glamour and gore that will make you look like the kombucha girl meme.

According to a press release, creative director and founder of Shrine, Jenna Meek, wanted to flashback to the brand's origins with the new Halloween festival looks. Meek said, "I briefed my team ‘Make it look like a festival has gone really wrong!’ With our new product ranges of fake blood, cut tattoo’s and glitter blood this only seemed like the most obvious look for us to go for this year. Festivals and Halloween are what we are known for so we thought lets bring them together and this is what happened!"

Prior to this year's Shrine Halloween collection, the brand had done fairly straight forward and "pretty" looks. They wanted switch up the style while still being true to what Shrine is as a brand. For those who want a costume that melds gore with sex appeal, the new pieces are ideal. Shrine has nearly everything you need to do so, too.

While some of the looks created by Shrine and its creative team will require additional products like liquid latex, for more simple looks, the brand has you taken care of.

Shrine's fake blood is, of course, a requirement when it comes to the gory festival looks. It doesn't hurt, however, that the faux bodily fluid is also vegan, cruelty-free, and less than $7.

You can't get on board with the glitter boob trend without the glitter. Snag a pair of Shrine's iconic product from their festival section to jazz up your gory spooky season look.

If you want to go for something that's a bit easier, these bloody tears are perfect. Use them with some of Shrine's face jewels to create a creepy but sad look. Just imagine if you didn't get a photo with the ferris wheel at Coachella, and you'll instantly be in costume.

If you don't want to go full-on exposed with your glitter boobs, try a glitter chest. Shrine's look included a ripped-open sternum with these jewels beneath.

If that gory glitter butt is calling your name (or your butt), you'll need chunky glitter to fill in those faux gashes. Use this chunky style and some of the brand's fake blood, and you're set.

The summer days of festival season don't have to be over yet. Spooky festival makeup is here, and it's as glittery as ever.