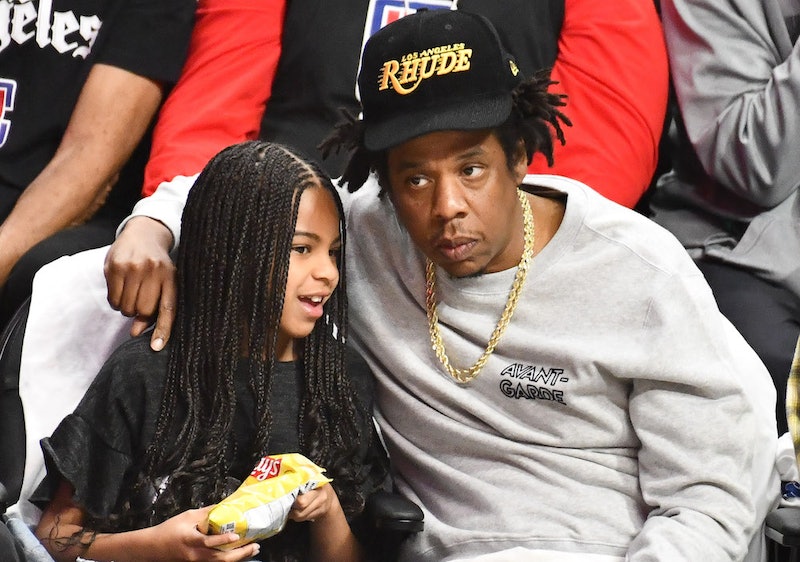 On March 8 at the Staples Center in Los Angeles, “Brown Skin Girl” songstress and basketball fan Blue Ivy Carter met LeBron James at a Lakers vs. Clippers game with her dad, Jay-Z. At the end of the game, the 4:44 rapper and his daughter made their way onto the court to congratulate James on the Lakers’ win. Per a Twitter clip shared by ESPN on Sunday, Blue Ivy had a special request for the athlete.

In black combat boots and a blue denim jacket, the 8-year-old shyly asked her dad to relay the message: an autographed basketball. “I can’t do it,” Jay-Z says to his daughter in the clip. “If you want it, you gotta tell him. You almost got it out. Yeah, just do it.” She then takes matters into her own hands and asks James for a signed ball. “You want a ball from me?” James says in the clip. “OK, I got you. You got school on Monday? By the time you get out of school on Monday, you’ll have it.”

This isn’t the first time Blue Ivy has joined her famous parents for a sports game: she also attended the Super Bowl with dad Jay-Z and mom Beyoncé to watch the San Francisco 49ers and Kansas City Chiefs square off in Miami, Florida in February. A clip of Blue throwing a football on the field prior to the game quickly went viral on Twitter.

Blue Ivy’s attendance at the Lakers vs. Clippers game comes after she won her first NAACP Image Awards on Feb. 21 for Beyoncé’s “Brown Skin Girl” from 2019’s The Lion King: The Gift. Along with artists Wizkid and Saint Jhn, Blue Ivy lends her vocals to the track and bellows out the lines, “Brown skin girl, skin just like pearls, best thing in the world, I'd never change it for anybody else." Her grandma Tina Lawson celebrated the achievement on Instagram. “The youngest artist to win a major award👏🏾👏🏾Grandma is soo proud of you," she wrote. "You are giving all the beautiful little brown girls a voice.”

But Blue Ivy sang on her parents' track prior to this as well, famously rapping in the bonus track, “Blue’s Freestyle/We Family,” featured in Jay-Z’s 2017 album 4:44. Then 5, Blue spit the lines, “Boom shakalaka boom shakalaka, boom shakalaka boom shakalaka. Everything everything, this my only single thing. Never seen a ceiling in my whole life.” Between her award-winning vocals and freestyle raps, it's curious that James wasn't starstruck by Blue Ivy, instead.