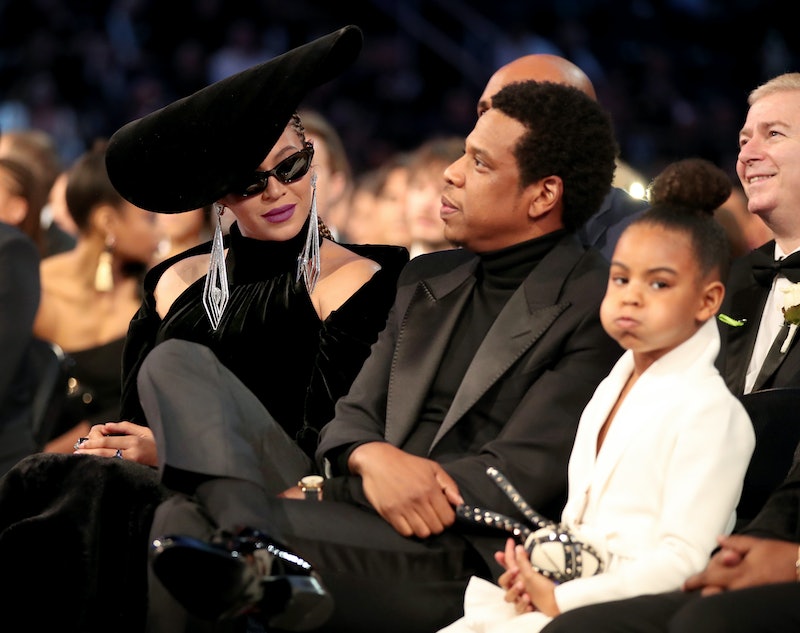 Blue Ivy is no stranger to the spotlight. With Beyoncé and Jay-Z as her parents, she not only is in the public eye, but she gets to experience a glam life fans can only dream of. But just because she's the daughter of two of the most influential artists of our generation, that doesn't mean she doesn't lead a normal life — at least somewhat. There are plenty of moments that prove Beyonce's daughter Blue Ivy is more relatable than you think.

Unlike some celebrity children, Blue Ivy was not kept out of the public eye. In fact, just two days after her birth in January 2012, Jay-Z released his song "Glory," which featured her cries. At age 2, she was featured in her mother's video "Blue." From there, she went on to make numerous cameos in her parents' music, like in her mother's song "Formation." And she was heard singing alongside her mother in Homecoming, which aired on Netflix in April.

Although Blue's mom is about to be the queen of Pride Rock when The Lion King comes out on July 19, Blue will always be there to take the spotlight from her parents. Whether it's at the Grammys or Halloween, when she's around, all eyes are on her. But despite wearing designer clothes and attending A-list events, let's remember she's still a kid at heart.

For Halloween in 2015, Blue and her parents dressed up as characters from the 1988 film Coming to America. While Blue Ivy's Halloween costume as queen-to-be Imani Izzi, Jay and Bey complemented the look with Jay dressing up as Prince Akeem of Zamunda and Bey as Queen Aoleon. The trio's costume are definitely more elaborate than the three blind mice or the three musketeers, proving Blue has slayed Halloween starting at the age of 3.

2. Reminding Her Parents To Keep Their Cool

Sometimes you have to bring your parents up to date with current fashion, social, and music trends, but what do you do if your parents are the ones setting those trends? Well, even Blue Ivy has to alter her parents' behavior, like at the 2017 Grammys when she hushed them for clapping while Camila Cabello was on stage.

3. Being Embarrassed By Her Parents

Everyone is embarrassed by their parents at some point in their lives. And even though it seems Bey and Jay can do no wrong, in June 2018, Blue Ivy was captured reacting in horror and hiding from her parents' video interluding their performance, which contained footage of them in bed. Even as the crowd cheered, Blue remained unamused by her parents public display of affection, which is so relatable.

Snapchat filters are fun, especially when you can apply them to more than one person. They even create for a good laugh when using them on your parents who don't expect their face to be changed when looking into the camera. However, Blue and B know how to rock the filter game as seen in this photo from February 2017.

5. Having No Trouble Spending Her Parents' Money

Nothing is easier than spending someone else's money. The same holds true for Blue Ivy who attended the Wearable Art Gala in March 2018. During the event, spending money wasn't an issue for Blue. In fact, Blue bid up to $19,000 on a painting and was quick to bid over herself. Ultimately the painting went to Tyler Perry, though, according to E News.

It's hard to remember Blue is only 7 when she acts so mature on red carpets and at events, but even she enjoys being silly every now and then. In March 2019, Blue told a corny joke with her grandma Tina Knowles, who got an amusing chuckle as her granddaughter told the joke — and then explained why it was so funny.

Joining a group when uninvited isn't always welcomed with open arms, but for Blue Ivy, she wasn't just welcomed, she was given the mic. At the 2017 Grammys, James Corden started a Carpool Karaoke with celebs like Faith Hill, Jennifer Lopez, and John Legend. As "Sweet Caroline" was belted, Blue joined in and immediately Corden shared the microphone with her.

Sure, everything Blue Ivy does has a little extra touch of glam to it, but just knowing she dresses up for Halloween and gets embarrassed by her parents makes it easier to believe that she's not so different from the rest of us.