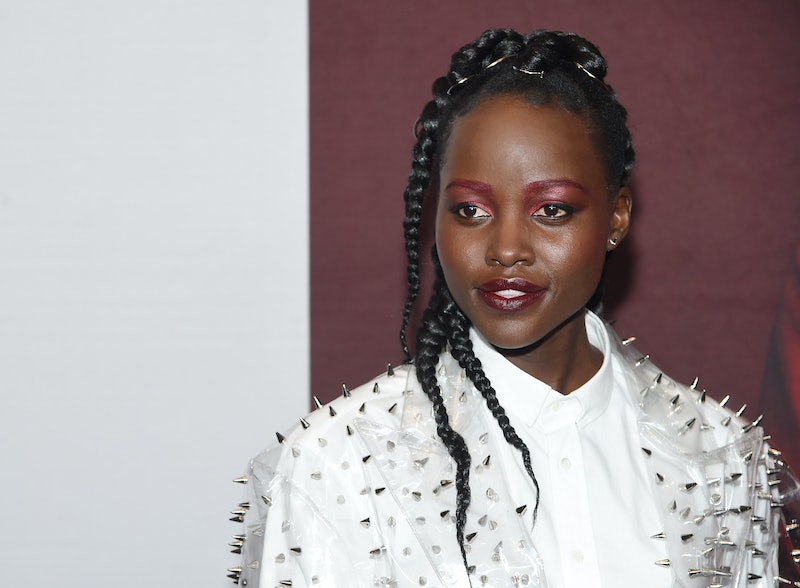 Everyone is a fan of Beyoncé but it turns out that the Queen Bey is actually a member of another celebrity's fan club. Shortly after the singer released her Lion King-inspired album The Gift, Lupita Nyong'o shared her reaction to Beyoncé's shoutout via an Instagram video of herself dancing to "Brown Skin Girl."

The Lion King: The Gift, which is designed to be "a love letter to Africa," according to Beyoncé features songs from Donald Glover, Kendrick Lamar, Major Lazer and Jessie Reyez. The album also features the song "Brown Skin Girl," by Beyoncé in which she encourages her daughter, Blue Ivy, and dark-skinned women everywhere to love themselves and their skin, "just like pearls." Beyoncé praises several famous "brown skin girls" in Hollywood in the first verse, singing, "Pose like a trophy when Naomis walk in / She need an Oscar for that pretty dark skin / Pretty like Lupita when the cameras close in / Drip broke the levee when my Kellys roll in."

Nyong'o showed her appreciation for the shoutout on social media, posting a video of herself grinning and dancing to the empowering track. "Brown Skin Girl," Nyong'o captioned the Instagram post. "Thank you Beyonce for this Gift!!" She also added the hashtag "#BrightnessIsJustWhoYouAre."

Beyoncé has long been a fan of Nyong'o and her work — in fact, when the Queen Bey met the Oscar winner at the 2014 Met Gala, she admitted that she was nervous to introduce herself. "My friends were like, ‘Oh there comes Beyoncé. I turned and she was coming towards me. It was her and Solange," Nyong'o recalled during a 2016 appearance on Jimmy Kimmel Live. "She said, 'Oh, me and my sister were just geeking out. Hi, I’m Beyoncé.' What kind of world is this where Beyoncé is coming to introduce herself to me? Oh my goodness, it was amazing."

And "Brown Skin Girl" isn't the first time that Nyong'o has gotten a musical shoutout from the Knowles-Carter family; in 2016, Jay-Z referenced her on his famous "We Made It" freestyle. Speaking with Kimmel after the freestyle dropped, Nyong'o explained that she found out about the Jay-Z lyric when her brother called her full of excitement. "I was like, 'What are you on about?' and he sent me the link, and then I heard it! I heard, 'I’m on my Lupita Nyong'o' and I was like, 'What?!'" she recalled. "I felt like the coolest kid ever."

In addition to the Nyong'o shoutout, "Brown Skin Girl" also features vocals from Blue Ivy Carter, who also got a writing credit on the song, according to Genius. The 7-year-old also appeared in the music video for her Beyoncé's Lion King song, "Spirit," which was released earlier this week. In the clip, Blue and her mother wear matching purple, ruffled ensembles, standing against the beautiful backdrop of the African landscape.

And even though she hasn't reached double digits yet, Beyoncé's oldest daughter has shown off her talents in a myriad of ways before her appearance on "Brown Skin Girl." In April, an acapella version of "Lift Every Voice and Sing" sung by Blue Ivy appeared in the Netflix documentary Homecoming (and the album that accompanied it). In 2017, Jay-Z also included a bonus track on his 4:44 album that featured Blue freestyling, which he later revealed she wrote all by herself.

Blue Ivy Carter might be the most impressive first-grader in the music industry, but based on "Brown Skin Girl" and its' inspiring lyrics, Beyoncé wants to empower her and women everywhere who look like her, to continue to be as strong, fearless and comfortable in their skin as possible.