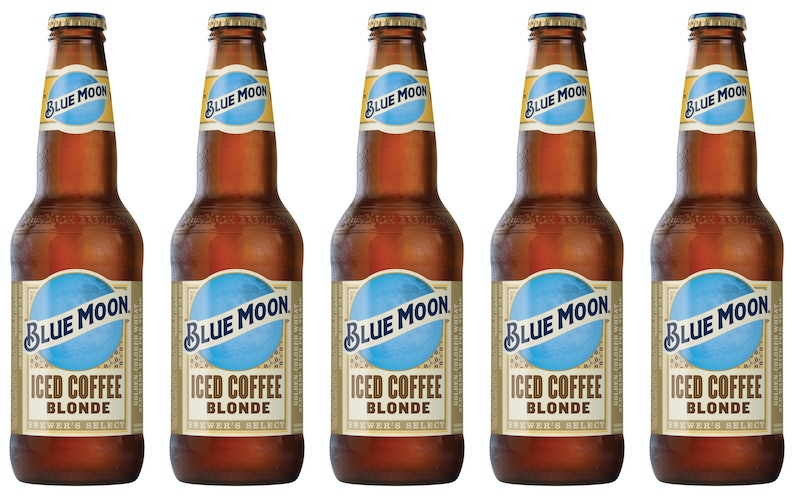 Proving that there's truly nothing that coffee won't pair with, it just went ahead and snuck into one of your favorite beers. Blue Moon Iced Coffee Blonde just hit shelves nationwide, further enabling us to take anything and everything we love and coffee-fy it. Essentially, Blue Moon and Starbucks had a baby, and it's here just in time for all your autumnal hangs.

Per Blue Moon, the Iced Coffee Blonde variety is a "blonde-colored wheat ale with bright coffee aroma and mild malt sweetness for a balanced taste and clean finish." It's currently available in Blue Moon's Share Pack, where it will sit with its siblings, Blue Moon Belgian White and Blue Moon Mango Wheat. According to the company, though, the variety was such a hit when it was introduced in Denver at Blue Moon's brewery that there are already plans to give Iced Coffee Blonde its own standalone pack — six-packs of the new variety should be hitting shelves in November 2019.

You'll be able to spot the new flavor on shelves with its "blonde" packaging and coffee vibes, and likely also by me shoving ten of them into my cart and making off with them before you get the chance.

Rounding out the variety pack that this flavor will initially be available in is Blue Moon Mango Wheat, which is a "refreshing beer with ripe mango flavor and biscuity malt sweetness" that pairs well with "shrimp or chicken with mango salsa, curry, French vanilla ice cream," per Blue Moon's website. It seems like the share pack is definitely targeted for that optimal summer-to-fall transition, with the Mango Wheat for the summertime holdouts and their lighter flavors, and the Iced Coffee Blonde sneaking in for those of us who are already elbows deep in Pumpkin Spice Land.

Speaking of all things pumpkin, Blue Moon Harvest Pumpkin Wheat will also be making a comeback this year — "brewed with real pumpkin and the right amount of harvest spices including cinnamon, nutmeg, cloves, and allspice," this variety pairs best with "beef dishes and seasonal soups," according to Blue Moon. That said, it also pairs well with all things pumpkin desserts, as well as any kind of autumnally-inclined bread situation, according to me, myself, and all bajillion of my beer-drinking tastebuds.

This isn't the first time an alcohol and coffee collab has hit the market in recent years. There is, of course, Apothic Brew, a cold brew-infused red wine that launched in 2018. Similarly, Pabst Blue Ribbon launched a Hard Coffee in July, which may just be the most collegiate sentence I've ever typed. La Colombe also recently introduced Hard Cold Brew, so we've kind of blurred the lines between whether these types of drinks are more coffee-forward or alcohol-forward at this point. Thankfully, like all the other Blue Moon flavors, you'll have an idea of what to expect when you get the Blue Moon Iced Coffee Blonde — just make sure that you're set up with the appropriate pumpkin-flavored dessert to pair with it.