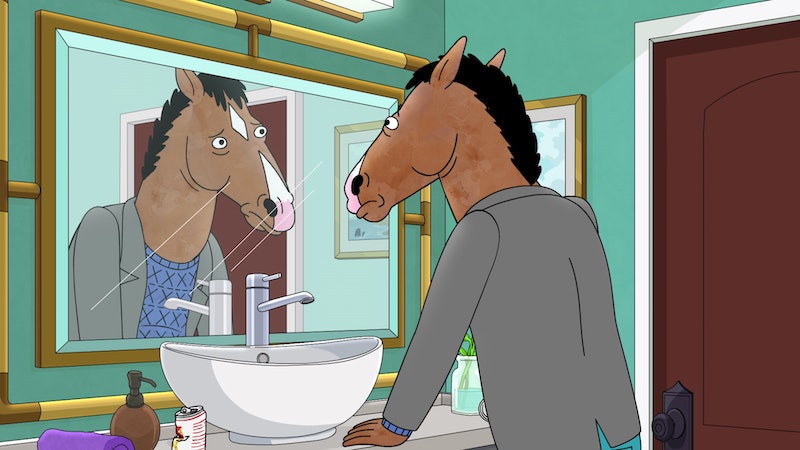 It's time to say goodbye to one of the most introspective and clever Hollywood satires on TV, which just so happens to star an animated horse man. Netflix's BoJack Horseman won't return after this season, and the series' last eight episodes will air on Jan. 31. Though viewers won't get to tune into the lives of BoJack, Diane, Princess Carolyn, and Mr. Peanutbutter any longer, the good news is that BoJack Horseman creator Raphael Bob-Waksberg still has other projects in the pipeline. Most notably, Undone, a show he co-created with Kate Purdy, is just as unique and thoughtful as BoJack Horseman, and certainly worth checking out after you view BoJack's final episodes.

“You know, it’s a business,” Bob-Waksberg said. “They’ve got to do what’s right for them, and six years is a very healthy run for a TV show. Frankly, I’m amazed we got this far. So I can’t complain. I think if we premiered on any other network, or even on Netflix on any other time than when we did, I don’t know if we would’ve gotten the second season … A lot of things on Netflix don’t get second seasons.”

Netflix did give him a heads-up about the cancelation when they renewed the show for it's sixth season, so Bob-Waksberg stressed to Vulture that the finale is the same one that would’ve aired even if the had show continued on. “I feel like we got through a solid ending that I feel good about, and like it’s a nice cap on the show,” Bob-Waksberg said.

Reviewers are a bit torn about the BoJack Horseman ending, which sees BoJack and the rest of the characters on the up-and-up, until BoJack is swept up in a Me Too-style accusation that threatens to undo all his progress. Jack Kleinman at Inverse wrote that the ending "feels like something requested by Netflix executives" to tie up every loose end, but it's still "a dignified ending" for the characters.

Jen Chaney at Vulture saw the ending as more fitting, writing that "very few shows could incorporate that many serious, comedic, and meta fabrics into a single thread and effectively pull it through the eye of a needle, but BoJack Horseman does it with ease. It’s one of many reasons I already miss this smart, simultaneously earnest and cynical show."

While fans of the show will miss BoJack regardless, they can always follow Bob-Waksberg's and Purdy's work on Undone. An Amazon show, Undone is about Rosa Salazar's Alma, who gets into a near-fatal car crash and wakes up with the ability to manipulate time. She begins to communicate with her dead father, who tells her she can use her powers to prevent his untimely death and alter the timeline. It's a very cerebral and moving show that's just as much about science-fiction as it is about mental health, and like BoJack, it balances comedy with drama very well. Unlike BoJack though, Undone is not about a difficult man learning to be less problematic, but a young woman trying to effectively manage her mental health and communicate clearly with her loved ones.

Undone won't take the sting away from BoJack being canceled, but considering the show has already been renewed for a Season 2, there's hope that Undone can be the next long-running BoJack.