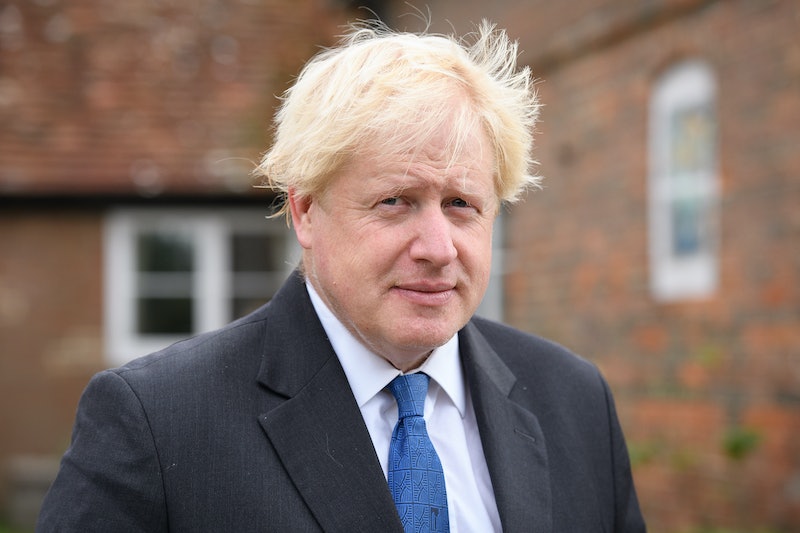 Boris Johnson took to the stage at the Conservative Party Conference on Oct. 2, and criticised the Government's Brexit plans as well as Labour's preference for a second referendum. He said: "If we cheat the electorate — and Chequers is a cheat — we will escalate the sense of mistrust." Appearing to enjoy himself behind the podium as he received a few laughs from the audience, he looked at ease. However, was all as it seemed? I decided to investigate Boris Johnson's body language to find out by talking to an expert.

Tonya Reiman knows pretty much everything when it comes to interpreting body language and has even written books on the matter. So, I asked her, was Johnson really as confident as he appeared on stage? Does he still feel supported by his Party after leaving his cabinet position?

After analysing a video of the former foreign secretary on stage, Reiman tells me that actually, Johnson probably wasn't feeling as optimistic as his smile and laughs may initially appear to suggest. In fact, there are even times when he appears to be uncomfortable while addressing his colleagues. She says: "The strongest moment that demonstrated discomfort, to me, was when he said, 'Quite frankly, conservatism ought to be a little easier after the Labour party conference of last week. I can’t get away with too many references to the '70s and '80s, but surely we can take on this Tony Benn tribute act,' as he scratched his head, which builds comfort and then immediately put his hand in his pocket."

Not one for beating around the bush, Johnson used his speech to lay out some pretty hard points about Britain's relationship with Europe, as well as the Labour party under Jeremy Corbyn. However, whilst his speech may have been scathing at points, his body language did not exude confidence, Reiman points out to me.

She explains that Johnson scratching his head was a "pacifying movement" done subconsciously to provide comfort. Putting his hand straight in his pocket may show "he was concealing a thought about something." Now, this was all done whilst Johnson was talking about how easy it should be to beat Corbyn and Labour. Could this suggest that perhaps he doesn't think Corbyn will be as easy to defeat in the polls as he is claiming verbally? Possibly.

Elsewhere during his speech, there were hints that Johnson may challenge Theresa May for leadership. While I can understand why he would want to become prime minister, suggesting out loud that you want somebody else's job must feel a little awkward, especially when you know they're listening. But how was Johnson feeling?

On this occasion, Reiman tells me that Johnson appears pretty optimistic. She says: "He is very comfortable at the podium making jokes about politics in general as well as self-deprecating jokes about himself.

"He comes across as quite powerful as he congruently uses his words to match his movements. He has a strong and powerful voice which he uses in sync with downward palms and double barrel finger pointing."

During his speech, Johnson criticised May's proposals for Brexit, describing it as a "cheat" that could contribute the rise of the far right movement. What does his body language say when he was making these statements about the woman, who is technically still his boss? According to Reiman, whilst Johnson was in his stride up on stage making everyone laugh, he showed signs of discomfort at moments like this.

So was Johnson feeling uneasy about his speech deep down or did he just have a few moments where his body language suggests he faltered? Whilst many have said that Johnson's speech was an attack on May and a bid for Conservative leadership, according to Reiman, his body language doesn’t suggest May has too much to worry about as he may not have been as confident on stage as his words would suggest.